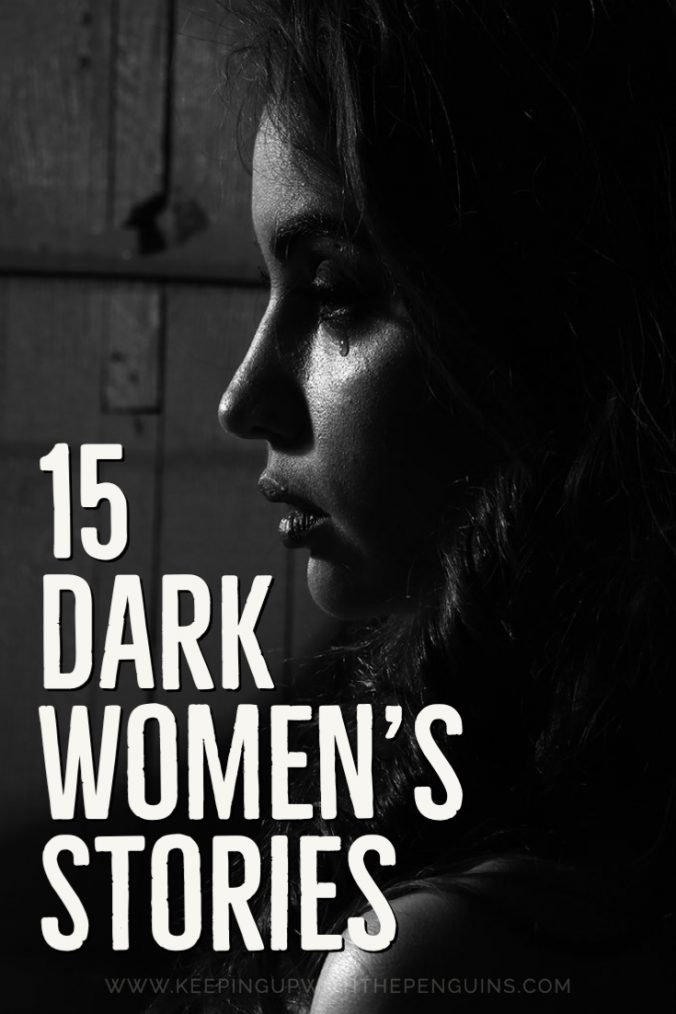 The London Book Fair is finally back, and The Guardian helpfully distilled their showcases into a list of book trends we should be on the look-out for over the next couple of years. One in particular caught my eye: dark women’s stories. The Guardian said: “Among many of the big deals announced at the fair were a number of novels about women in dark and desperate situations, perhaps reflecting current discussions about women’s health and safety.”

Even though I don’t love the descriptor (why are they “women’s stories”? won’t people who aren’t women read them?), I looked over my shelves and found a bunch of titles that fit the bill. So, if you don’t want to wait for the showcased titles at LBF to trickle out, here are 15 dark women’s stories to tide you over.

On the face of it, Adèle sounds more like one of an adolescent boy’s wet dreams than one of the dark women’s stories that fascinate readers – but glances can be deceiving. The narrator is a sex addict. She lives in Paris, she has an adoring husband, a healthy kid, and a satisfying job as a respected journalist. Her addiction threatens to ruin it all. Adèle is a Moshfegh-esque protagonist, one whose single-minded desire and self-interest will undoubtedly turn off a lot of readers. She’s effectively delusional, and she (almost) sucks the reader under with her. Read my full review of Adèle here.

The Dressmaker by Rosalie Ham

The Dressmaker is set in a (fictional) Australian country town in the 1950s, so everyone has names like “Gertrude” and “Muriel”. The protagonist (Myrtle “Tilly” Dunnage) returns to her hometown to take care of her ailing mother – who is more than a little cracked, it must be said. That might sound like the premise of a great rom-com, but instead, Ham’s debut novel is one of the darkest women’s stories to come out of Australia in the early 2000s. Yes, Tilly finds herself falling in love with a hometown boy, but there’s a very dark twist to that affair you won’t see coming. Read my full review of The Dressmaker here.

Gone Girl came on the crest of the wave of psychological thrillers with unreliable female narrators, and it sold over two million copies in the first year following its release. As a result, it’s become one of the most iconic dark women’s stories in living memory, synonymous with both dime-a-dozen female revenge fantasies and subversion of the typical “plot twists” we see so often in this kind of novel. Every character – from the married couple to the childhood friends to the greasy lawyer – exists in a murky grey area. There are no heroes and no villains (basically, everyone sucks here), and yet it’s a compelling read. Read my full review of Gone Girl here.

If it’s dark women’s stories you’re after, Her Body And Other Parties has them in abundance. This game-changing short story collection ricochets from magical realism to horror to science fiction to comedy to fantasy to epistolary, so fast that the genres and tropes are pureed together into a deliciously heinous pulp. It all starts with The Husband Stitch, Machado’s take on the classic spooky story of the Green Ribbon; women’s stories don’t get much darker than a narrator losing her head because of her husband’s selfish greed. And – believe it or not – the stories only get better, more twisted, from there. Read my full review of Her Body And Other Parties here.

The unnamed narrator of the Booker Prize-winning novel Milkman has a remarkably blasé approach to telling one of the best dark women’s stories to come out of Northern Ireland. As per the blurb: “In this unnamed city, to be interesting is to be dangerous… [Milkman is] a tale of gossip and hearsay, silence and deliberate deafness. It is the story of inaction with enormous consequences.” The narrator is being stalked by a paramilitary honcho she calls “the milkman”, and his pursuit of her increases in intensity over the course of the novel, to the point where it becomes life-threatening. Read my full review of Milkman here.

As much as we all love to read dark women’s stories with a bit of mystery and intrigue, sometimes it’s nice to read one with the premise laid out completely in the title. My Sister, The Serial Killer gives you exactly what it says on the tin: the story of Korede and her sister, Ayoola, who has the unfortunate habit of killing her boyfriends. The stakes ramp up when Ayoola sets her sights on the doctor that Korede has been crushing on for months. Korede is literally the person Ayoola calls to help her drag a body across the floor, but sibling loyalty can only go so far. Read my full review of My Sister, The Serial Killer here.

Few real life crimes have captured and horrified the world like the Fritzl case. Elisabeth Fritzl had been abused by her father since age 11; after she attempted to escape, he lured her into the basement of their family home and knocked her unconscious, and so began her twenty-four-year imprisonment. The story sparked an idea in Emma Donoghue, and her fictional book Room – in which a young woman kept imprisoned by a man who beats and rapes her, raising a child in the most horrifying of circumstances – is the result. In a remarkable step forward for dark women’s stories, though, Donoghue’s story doesn’t focus on the captor but on his victims, and their journey to “freedom”. Read my full review of Room here.

She Came To Stay by Simone de Beauvoir

Dark women’s stories are hardly a recent phenomenon. If we look hard enough at the classics, we’ll find plenty of them – like feminist icon Simone de Beuavoir’s She Came To Stay. It’s a fictional account of her and Jean-Paul Sartre’s relationship with Olga Kosakievicz (to whom the book is dedicated). This will hardly come as a shock, but it turns out de Beauvoir had some hard feelings about the 17-year-old who “came between” her and Sartre, the love of her life, and in many ways this novel is her act of revenge. The proof is in this dark, twisted pudding. Read my full review of She Came To Stay here.

The Vegetarian by Han Kang

“Before my wife turned vegetarian, I’d always thought of her as completely unremarkable in every way.” Isn’t that just… *chef’s kiss*? It’s an opening line that promises a brilliant, twisted story to come. The Vegetarian is “a beautiful, unsettling novel in three acts about rebellion and taboo, violence and eroticism, and the twisting metamorphosis of a soul”. It’s a story about Yeong-hye, an ordinary woman with an ordinary husband, who up-ends her life and the lives of those around her by deciding to commit to vegetarianism. Even though Yeong-hye doesn’t have much of a voice in the novel, this is one of the definitive dark women’s stories of the century. Read my full review of The Vegetarian here.

The Bass Rock by Evie Wyld

Evie Wyld is renowned for her dark women’s stories – in fact, she’s won awards for them, time and time again. The Bass Rock is undoubtedly the darkest. It stretches across centuries to examine the various forms of violence visited upon women by men. There are three women at its heart: Sarah, in the 1700s, accused of being a witch and forced to flee into the woods; Ruth, navigating a new home, a new husband, and a new family in the wake of WWII; and Viv, in the present day, forced to reckon with the weight of inter-generational trauma and dysfunction. Read my full review of The Bass Rock here.

Sayaka Murata has produced the best dark women’s stories out of Japan this decade (and that’s a hill I’m willing to die on). Take Earthlings, which might appear to be a story about a family black sheep who believes she has super-powers… before it twists, and twists again, and again. At 34 years old, Natsuki is pretending to be normal, living a quiet life in an asexual marriage, hoping that she can someday succumb to the pressure to be truly “normal”. Unfortunately, the horrors of her childhood won’t be quieted so easily. Elements of the surreal and the horrific make the story tangible, visceral, and unforgettable. Read my full review of Earthlings here.

The Recovery Of Rose Gold by Stephanie Wrobel

Stephanie Wrobel’s debut novel, The Recovery of Rose Gold (called Darling Rose Gold in other regions), explores the twisted co-dependent relationship between mother and daughter that develops as a result of the mother’s Munchausen Syndrome by Proxy. As far as dark women’s stories go, it’s hard to imagine anything darker than a woman intentionally making her own child sick to serve her own pathology. MSBP is a relatively rare psychological condition, and as a premise for a thriller it’s intense and fascinating. Read my full review of The Recovery Of Rose Gold here.

Hurricane Season is a murder mystery (of sorts) set in rural Mexico, and translated into English by Sophie Hughes. It’s inspired by real events, an honest-to-goodness witch hunt, near Melchor’s hometown. The story begins when a group of children discover a decomposing body in a canal, that of the local Witch, and the story unfolds through the perspectives of bystanders, accomplices, and (of course) the perpetrators. That might sound fairly benign for dedicated thriller readers, but it’s a heavy read, well deserving of its place on this list of dark women’s stories. Read my full review of Hurricane Season here.

Ottessa Moshfegh has basically become the poster child for dark women’s stories. Eileen is the one that shot her to literary stardom. Eileen Dunlop is “an unassuming yet disturbed young woman trapped between her role as her alcoholic father’s caretaker in a home whose squalor is the talk of the neighborhood and a day job as a secretary at the boys’ prison, filled with its own quotidian horrors”. As you can imagine, this has left her pretty bitter and twisted, which is why Rebecca – the prison’s new counselor – is a breath of fresh air. But in dark women’s stories, there’s never an uncomplicated friendship, and no such thing as a truly happy ending.

Two bullied teenagers find connection and solace in each other. A lazy eye and a dirty shirt are enough to see them ostracised by their peers. They exchange letters, each dripping with the desperate emotional intimacy of kids who don’t have anyone else. Over the course of just 167 pages, their friendship devolves to a horrifying denoument. The narrator of Heaven is an adolescent boy, but it’s so rich in feeling and so deep in despair (plus, it’s written by such a badass Japanese woman) that it surely belongs among the best dark women’s stories of recent years. Read my full review of Heaven here.