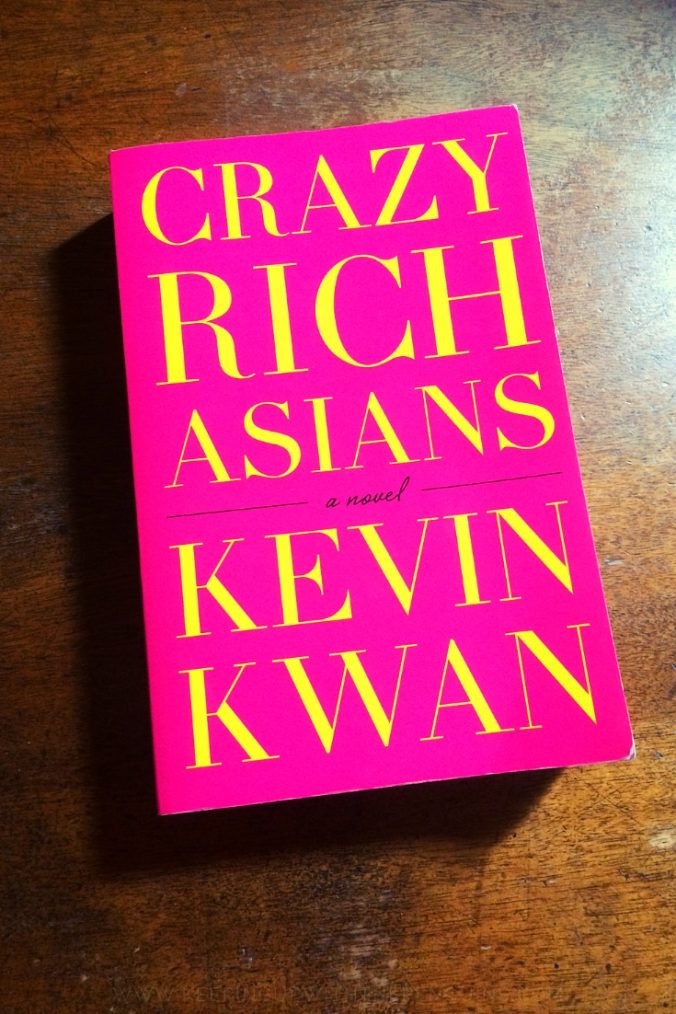 14th century Moroccan traveller Ibn Battuta wrote: “Nowhere in the world are there to be found people richer than the Chinese”. It’s a fitting epigraph for Kevin Kwan’s debut novel Crazy Rich Asians, an outrageous over-the-top satirical novel about the very richest Chinese families, first published back in 2013.

Kwan has said that, in writing Crazy Rich Asians, he wanted to “introduce a contemporary Asia to a North American audience” – and try to bite back your jealousy when you hear that he loosely based the novel on his own upbringing in Singapore. While caring for his father (who sadly passed in 2010), Kwan began writing stories to preserve the memories they shared. Beginning with the chapter he called “Singapore Bible Study” (“an excuse [for attendees] to gossip and show off new jewellery”), he eventually developed the stories into a novel.

Crazy Rich Asians revolves around five central characters, though the full cast is huge. There’s a helpful family tree in the front to help you keep things straight, with hilarious footnotes (the footnotes continue throughout the novel, but sadly devolve into oddly patronising for-dummies translations of slang terms and descriptions of Asian cuisine).

Things kick off when Nicholas (Nick) Young, heir to the fortune of one of the wealthiest families in Asia, asks his ABC (American Born Chinese) girlfriend Rachel Chu to come to Singapore with him, to attend the wedding of the year. Singapore’s most eligible bachelor, Colin Khoo, is marrying fashion icon, Araminta Lee, and everyone’s going to be there.

Rachel has basically no idea about Nick’s family or wealth. As far as she knows, he’s a regular old middle-class NYU professor, like her. She crashes into this grand-wedding-cum-family-reunion completely unprepared.

Eleanor Young, Nick’s controlling mother, is one of the titular Crazy Rich Asians. She’s as obsessed with prestige and propriety as you’d expect a ridiculously wealthy matriarch to be. She’s terrified at the prospect that Nick might be serious about – might even marry – a girl no one knows, an American, from outside her close-knit circle of wealthy friends and families.

Eleanor hires a private investigator to learn more about Rachel’s past, hoping to use whatever she uncovers to prove to Nick that she’s not a suitable marriage prospect. Things backfire, in more ways than one.

And, as if that’s not enough, there are side plots galore. There’s Nick’s younger brother and his trampy soap-opera star girlfriend, who shows up to meet the family in a completely sheer outfit. There’s Nick’s cousin, who is baffled to discover that her seemingly-happy husband is receiving filthy text messages from a Hong Kong mistress. Colin’s wondering what the hell he’s got himself into with all these wedding shenanigans, and whether he can stomach the hoopla long enough to get Araminta down the aisle. And more!

Crazy Rich Asians is just as gossipy as Austen, with the same emphasis on class, lineage, and scandal. Of course, the volume is turned up to eleven, with jaw-dropping opulence in every aspect – designers, decor, and domestic help. In fact, Kwan has said that his editor asked that some off the more lavish details be cut from the story, as they weren’t “believable”; Kwan sent through links to news articles to prove that the families he’s writing about really do live this way. Truth is less believable than fiction, at least in this case.

It was fun to plunge into the glitzy world of the Youngs and the Leongs, but a couple of things held me back from enjoying Crazy Rich Asians as thoroughly as I would have liked. Firstly, the dialogue was quite stilted throughout, and tended to over-explain (I recall a similar issue when reading Kevin Kwan’s 2020 novel Sex And Vanity). Secondly, there was a shocking and unexpected scene about dog-fighting, which made my breath catch in my throat. Thankfully, it was called out by characters in-text, but it still felt really jarring. I skipped my eyes over a page or two, and went back to the glitzy fun I came for. (Oh, and another trigger warning, there’s a fairly detailed description of a pretty awful domestic abuse situation towards the end.)

Still, despite those issues, I can see why Crazy Rich Asians went gangbusters and became an international best-seller. Kwan capitalised on the momentum and released two sequels: China Rich Girlfriend in 2015, and Rich People Problems in 2017. There was a film adaptation too, which was widely praised for its carefully curated aesthetic and Asian cast.

All told, if you’re looking for a book to take to the beach, Crazy Rich Asians is a very safe bet. Be prepared to weep the next time you check your own bank balance, though!