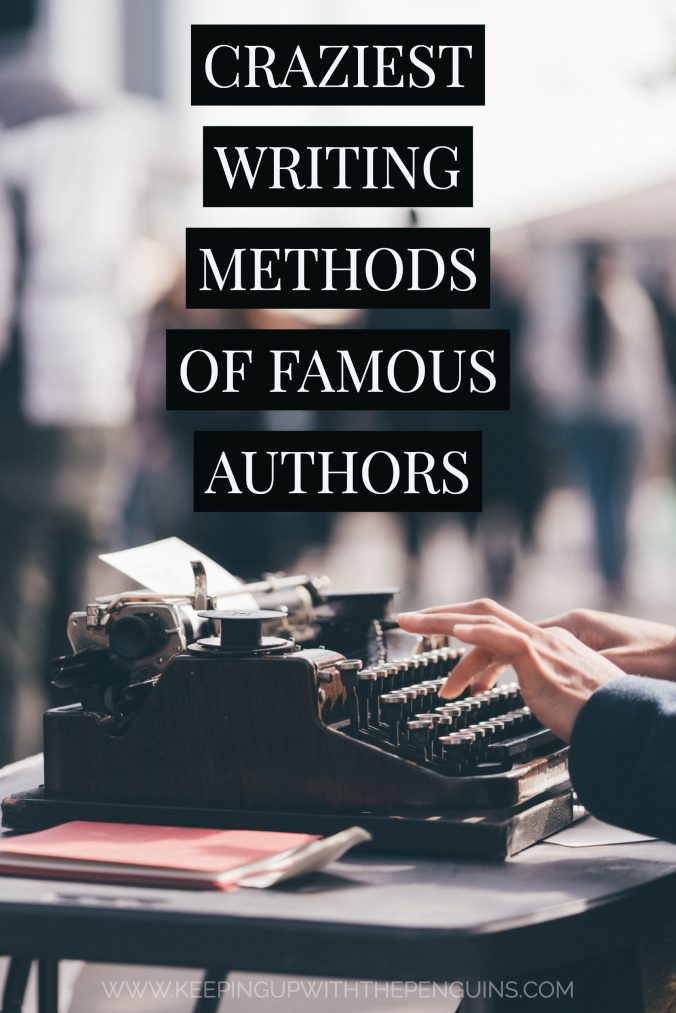 When we start talking about how our favourite writers write, I think all of us conjure up one of two mental pictures. We either imagine the disciplined, dedicated writer (like Stephen King) with his set schedule and his carefully-arranged study, or we think of the heavy-drinking night owl (see: Hunter S Thompson), who obliterates their body and mind but vomits out genius works of art at random. Authors certainly exist right across that spectrum, but it’s always more fun to read about the latter. Here are some of the craziest writing methods of famous authors, the bizarre habits and creative processes that have produced amazing works of literature.

Jack Kerouac spent years scribbling down notes for On The Road in his various journals before he actually sat down at a typewriter and got on with it. He went from one extreme to another, though. He decided that having to stop for anything would be an unwelcome distraction in his creative process, so he procured a single 120-foot scroll of paper, and thus began typing his manuscript. His work poured forth, and he wrote the entire draft in what was effectively a single burst, barely stopping for food and water. When he was done, he just rolled it back up, and marched on down to his editor’s office. Of course, his sensible editor told Kerouac that he was out of his mind, and he’d need to type it up on normal pages in order for them to edit it – in response, Kerouac threw a tanty and stormed out.

Kerouac was also highly superstitious (about his writing, but also life in general). He tried out various rituals to get the creative juices flowing: writing only by candlelight, writing by a full moon, praying before sitting down to write, standing on his head (yes, really). Clearly, something worked, because he is now considered the darling of the Beat generation literary movement. Read my full review of On The Road here.

Maya Angelou took Virginia Woolf’s maxim (that a woman needs a room of one’s own) to the next level. She rented a hotel room in her hometown by the month, and used it as her “study”. At 6:30AM each morning, she would head over there and spend the morning writing. She specifically requested that management remove all paintings and decorative items from the room (too distracting), and forbade housekeeping staff from cleaning the room (lest they inadvertently throw away a scrap of paper containing a line of genius). She stocked the room herself with a thesaurus, a dictionary, the Bible, and a few crossword puzzles; she believed her “Big Mind” would sort out problems in her work if she kept her “Little Mind” occupied with something else.

Of course, she never actually slept there. She would leave around 2:00PM, run her errands, and then review the pages she’d written that day at home after dinner. She is cited as saying she’d inevitably scrap most of them, but keep the process up until she had about fifty good pages that she was happy with. And that’s how her work was born. Read my full review of I Know Why The Caged Bird Sings here.

Granted, Aaron Sorkin isn’t an “author” in the same sense as everyone else on this list – he’s actually a screenwriter, the mind behind A Few Good Men, The Social Network, and The West Wing. Still, his process is definitely bonkers enough to warrant inclusion here!

In 2011, Sorkin arrived at an Emmy event with a broken nose. When pressed by the media, he confessed that the injury was incurred as part of his writing process. It turns out, Sorkin workshops his dialogue… with himself, reading his lines out loud into a mirror. While working on a script, he became so enraged with his character’s situation that he head-butted the glass! He was probably on to something good, but… sheesh.

I’m not being funny: Victor Hugo literally wrote The Hunchback of Notre Dame in the nude. He was working to an incredibly tight deadline in 1831, and found himself becoming distracted by, y’know, leaving the house all the time. So, what’s a writer to do?

Well, the obvious: Hugo bought himself a big bottle of ink, and asked his valet to confiscate all of his clothes. You can’t go out and have a good time and miss your deadline if you’ve got nothing to wear! Hugo fought off the cold by wrapping himself in a huge grey shawl, and set about writing out the manuscript, all the while in his birthday suit.

It’s unconventional, but you’ve got to give it to Hugo: it’s genius!

This is perhaps the grown-up’s version of Kerouac’s scroll. It was 1987 when Kazuo Ishiguro convinced his wife to let him try something a little weird. No, not that! He convinced her to take on all of his housework and emotional labour (like wives have done for centuries before, but I digress), he completely cleared his calendar, and planned an entirely new approach to his book. He did nothing but write from 9:00AM-10:30PM, six days a week. He allowed himself an hour each day for lunch, and two for dinner (what a slacker!). He didn’t answer the phone once in this time, or even look at a piece of mail. His plan was to reach a mental state in which his “fictional world was more real to him than the actual one”. Apparently it worked, because this process produced The Remains of the Day. The first draft took him four weeks, writing free-hand on his writing slope.

In fact, Ishiguro still writes all of his first drafts on that writing slope. When the time comes to type them up, he uses a computer that dates back to 1996 – it’s not connected to the Internet. Neither of these habits are particularly kooky. What really disturbed me was reading Ishiguro quoted in an interview as saying that, while he was working on The Buried Giant, he didn’t watch a single episode of Game of Thrones. Apparently, he wanted to remain focused on his own fictional world, and he was worried that taking an hour to watch an HBO series once a week would “tamper with the world that he set up”. It’s all well and good to sacrifice for your art, but surely there are limits to what a human being can endure! 😉

Read my full review of An Artist Of The Floating World here.

Read my full review of Klara And The Sun here.

Read my full review of Never Let Me Go here.

For anyone who has read James Joyce’s work, it won’t come as any surprise to see him included in this list. He wrote one of the most notoriously unreadable novels in the history of English literature (Finnegan’s Wake); it took him seventeen years to complete, and every sentence is so oblique that most people need a companion guide to read alongside it. (I’m not game enough to take it on just yet – but I did give Ulysses a go.)

Why seventeen years? Well, firstly, Joyce considered hammering out two whole sentences to be a “good day’s work”, so he wasn’t the most prolific guy. Secondly, he was working at a pretty serious disadvantage: he was almost blind. He was horribly near-sighted, and ended up developing iritis (a painful eye condition, the result of rheumatic fever). He had twenty-five eye surgeries in an attempt to improve his condition, with no luck. So, he took to writing with large blue pencils and crayons, laying on his stomach in bed, wearing a big white coat.

It sounds nuts, but there was actually method to his madness! The colourful writing implements were big enough and bright enough to help him see what he was writing. He also believed that the white coat reflected more light onto the page in front of him. As for laying on his stomach in bed, well: there probably aren’t many more comfortable ways to get your eyes as close to the page as possible. Maybe he wasn’t that crazy after all! Read my full review of Ulysses here.

Of course, I’ve saved the best for last. Friedrich Schiller’s mate, Goethe, has dobbed him in as having probably the craziest writing method of all time. See, Goethe stopped by Schiller’s house one night, and – finding that his friend was out and about – decided to wait, and have a snoop around.

He noticed a strange smell emanating from the bottom drawer of a desk, in the study where Schiller would work. Goethe leaned down, opened it, and found… a pile of rotting apples.

No joke: Schiller had deliberately stored a bunch in a drawer, and waited patiently for them to go off. He told his wife that the odor was “inspiring”, and he “could not live or work without it”. That woman deserves an actual medal, because what the fuck?! According to Goethe, the smell was so overpowering that it was enough to make you lightheaded. I’m not one to judge, but… Schiller was off his rocker.

Writers are hardly known for being well-adjusted and sensible, but this lot really take the cake. Have you heard about any other crazy writing methods of famous authors? Are you inspired to develop one of your own? Let me know in the comments below (or tell us over at KUWTP on Facebook!).

On The Road – Jack Kerouac