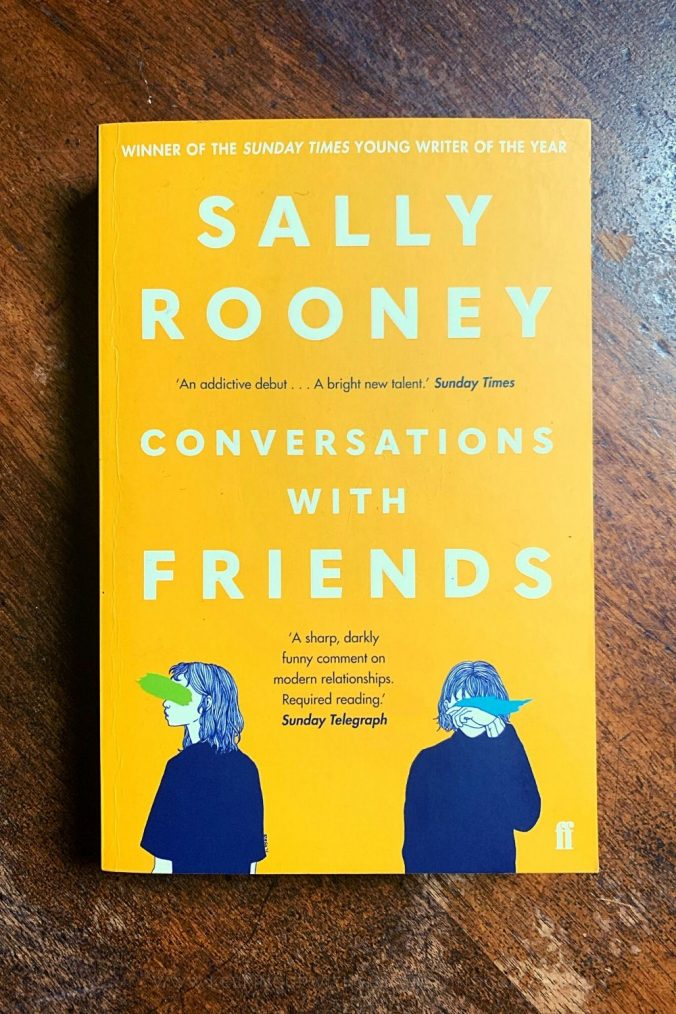 Frances and Bobbi are exes, and performance poets, and friends. They meet a pair of married grown-ups, Melissa and Nick, who are almost-happily married (it would seem). The situation quickly evolves into a Golden Bowl-esque love quadrangle, with Frances and Nick carrying on behind everyone’s backs while Bobbi pines after Melissa from afar. In that regard, Conversations With Friends shares a lot of genetic material with Normal People, Rooney’s second novel; both feature young Irish intellectuals getting themselves tangled up in complicated love affairs.

But rather than a soapy on-again-off-again romance between two abhorrent youths, Conversations With Friends offers a sharper view of identity and intimacy. The players are a lot more clearly delineated, and their motivations are at least fathomable, if not understandable.

The narrator, Frances, is very young (21 years old), as Rooney was at the time of writing (and still is, some might say!). But the prose is very literary – you can tell, because there are no quotation marks for speech, ha! You could read Conversations With Friends as a coming-of-age novel, but it’s not YA. It’s YA for grown-ups.

The characters – especially Frances – know a lot, but they don’t know themselves at all. Their lack of self-awareness, especially coupled with their elite education and “book smarts”, might be grating for some readers. I would have assumed I’d find it annoying as heck, had I known about it before diving in. It’s a testament to Rooney’s talent that she makes it intriguing, enjoyable even. Alexandra Schwartz said, in a review for the New Yorker: “One wonderful aspect of Rooney’s consistently wonderful novel is the fierce clarity with which she examines the self-delusion that so often festers alongside presumed self-knowledge”, and that about sums it up.

I did have a big laugh towards the end when Bobbi and Frances essentially played out the Bad Art Friend drama, years before it went viral on Twitter. Frances writes a short story about Bobbi and doesn’t tell her, even when it’s accepted for publication (for the jaw-dropping fee of €800 – let me tell you, ain’t nobody getting paid that much for the first short story they’ve ever written in 2022!). Melissa gets a hold of it, and forwards it to Bobbi in a moment of spite. Even though Frances insists that the portrait she paints of her friend “isn’t unflattering”, Bobbi still takes offense. It very nearly tears the friends and former lovers apart.

Having typed that, I find myself wondering if it constitutes a spoiler. It’s hard to say, because Conversations With Friends doesn’t really have an ending, per se. There are climaxes for most of the plot points, but none of them are really “resolved” by the final page. I suppose you could make the argument that Frances makes major strides in terms of her self-awareness and boundaries, but her personal development certainly isn’t finished. But, Rooney wrote “fin”, and she knows best, so.

And, of course, Conversations With Friends is coming to a screen near you. After the blockbuster success of the adaptation of Normal People, Hulu and BBC Three announced that they’d be giving Rooney’s debut novel the treatment as well. It’s set to be released sometime this year. I might watch it, I might not – I can’t say I have a strong feeling one way or the other.

What I do feel strongly about, though, is my unpopular opinion that Conversations With Friends is a better book than Normal People. It’s a better rendering of intimacy, and the way we perceive ourselves and each other. It’s more readable and interesting, it’s more dynamic, and I liked it much better. Maybe I shouldn’t have been so quick to write off Beautiful World, Where Are You? after all.

My favourite Amazon reviews of Conversations With Friends:

Award Winners, Books Made Into Movies