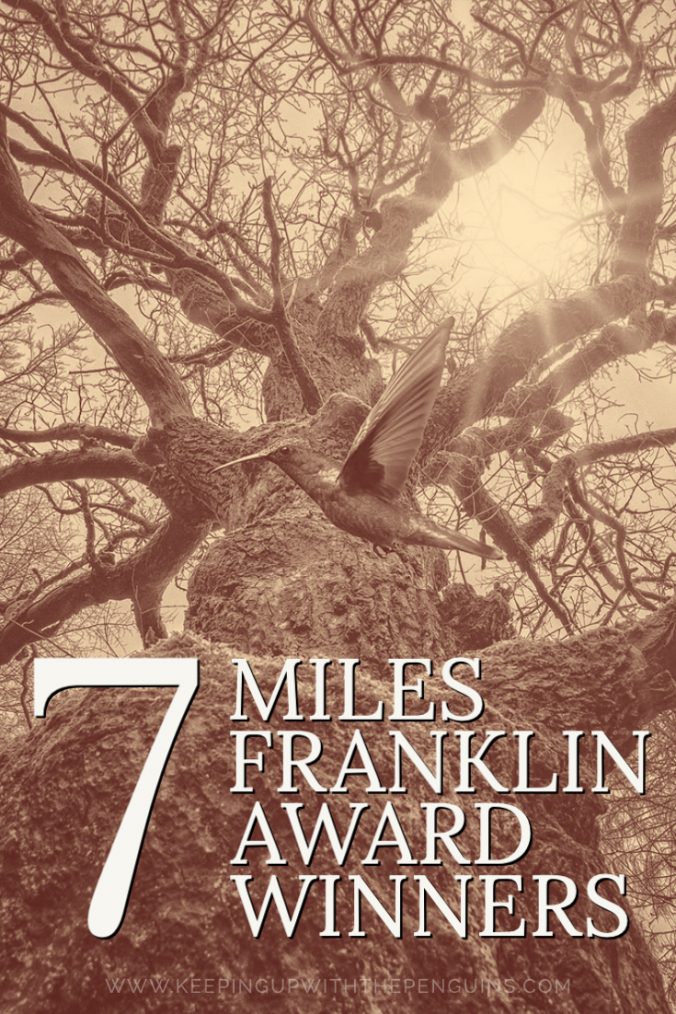 The Miles Franklin Literary Award is Australia’s highest literary honour, bestowed each year upon a book the judges deem to be “of the highest literary merit and presents Australian life in any of its phases”. The cash prize is drawn from the estate of Miles Franklin, the iconic Australian author who was passionate about developing Australian literature and… well, let’s leave it at that (because some of her other stuff was problematic as heck). The prize hasn’t always been held in high esteem by readers like me, because it has historically been awarded nearly exclusively to cis white men, but in recent years it has undertaken to expand and incorporate the kinds of books and authors that better represent Australia as it actually is. Here are seven contemporary Miles Franklin Award winners that demonstrate this new focus and direction…

From the Judges’ Comments: “In this powerful road-movie-in-reverse, Jake Whyte flees the blazing humiliations of teen trauma to find herself confronting a beast of more gothic proportions. Saturated with menace, the novel’s upside-down pastoral elegy traces with great subtlety the alienation felt by this youthful outsider. In Darwin and also in remote outback Australia, Jake has sold herself all too cheaply, and her flight from an ever-present past builds narrative momentum into a vivid and unforgettable moral fable. Replete with adrenaline-fueled escapades, Evie Wyld’s heart-stopping second novel opens with a mocking row of Hitchcockian crows as they strut and caw over one of Jake’s recently mutilated sheep. Exiled on a bleak and windy, rain-driven island at the end of the world, she finds herself with only her so-called Dog for company and then an enigmatic stranger who impinges on her solitude.”

From the Judges’ Comments: “The Eye of the Sheep impressively examines domestic violence through Jimmy’s non-judgmental perceptions. Hints of his parents’ challenging upbringings adds to the gravity of the story of these working-class people trying their hardest to build a family, capable of both proud love and sickening violence. Gavin’s battle with alcohol, and Paula’s with her health, are related through Jimmy’s skewed interpretations. The power of this finely crafted novel lies in its coruscating language, inventive and imaginative, reflecting Jimmy’s vivid inner world of light and connections and pulsing energy. Laguna has a true ear for the rhythms of everyday dialogue, and her compassionate rendering of the frustrations – and compensations – of dealing with a child of sideways abilities, makes this novel an impressively eloquent achievement.”

From the Judges’ Comments: “A fresh and powerful exploration of the immigrant experience and Australian life, Black Rock White City explores the damages of war, the constraints of choice, the possibility of redemptive love and social isolation amid suburbia. In language as crisp and pungent as the chemicals Jovan uses to erase the graffiti, Black Rock White City submerges the reader in its unapologetic intimacy.  It is at times brutal, and frequently challenging, yet a deft poetry underlies its cinematic reach. Patric’s idiosyncratic awareness and sometimes disconcerting vision inhabits the margins between realism and fable as the novel’s invigorating vitality, astute wit and adroit observations on the links between language and identity gives us a roller-coaster read that pins the immigrant – and the wider Australian  – experience with an eye that is unflinchingly, and unforgettably, honest.”

From the Judges’ Comments: “In Extinctions, a compassionate and unapologetically intelligent novel, Josephine Wilson explores ageing, adoption, grief and remorse, empathy and self-centredness. Fred Lothian is a man in denial: a brilliant engineer, now retired and widowed. He knows that ‘for an engineer there was a bridge for every situation’; but solutions for the complexity of human problems elude him. So he looks away from his son’s tragic injury, his adopted Aboriginal daughter’s cultural loss: his only intimacy is with his collection of high design modernist objects. Only the intervention of his spirited next-door neighbour at his retirement village, Jan Venturi, forces him out of his carapace of self-absorption long enough to bring both comedy and recognition into his life, and some degree of redemption. The novel is also a meditation on survival: on what people carry, on how they cope, and on why they might, after so much putting their head in the sand, come to the decision to engage, and even change.”

From the Judges’ Comments: “Michelle de Kretser’s The Life to Come is a powerful novel that effortlessly blends sharp satire of the literary world with deeply compassionate portraits of lonely people and their strategies for survival. It keenly skewers certain contemporary ways of being such as our obsession with food, use of social media and modes of political activism. But it is, at its heart, a novel about character: it probes to expose foibles but also to understand and, ultimately, sympathise. Sydney is the principal setting – its weather, light, seasons and urban geography are vividly evoked – and the multiple stories detour to Paris and Sri Lanka as well. Sentence-by-sentence, it is elegant, full of life and funny. With her characteristic wit and style Michelle de Kretser dissects the way Australians see ourselves, and reflects on the ways other parts of the world see us.”

Too Much Lip by Melissa Lucashenko (2019)

From the Judges’ Comments: “Too Much Lip is a novel of celebratory defiance. Set in Bundjalung country, this fast-paced, hard-hitting narrative confronts political corruption, poverty, intergenerational trauma and various forms of violence and abuse, with humour, wit and fury. Lucashenko’s Goorie characters wrestle with personal wounds and long-held grievances. They exist on the margins: of power, the law, small-town society and, often, personal responsibility. Yet they know the stories passed down from their grandmothers. They remain connected to Country. When Granny Ava’s Island is under threat of development the Salter mob come into their own. Country must not and cannot be taken away.” Read my full review of Too Much Lip here.

From the Judges’ Comments: “Wiradjuri author Tara June Winch’s The Yield explores the gap between white and Indigenous cultures as well as the intersections between the contemporary and the colonial. There are three narrators – a young woman returning home for her grandfather’s funeral after a decade in self-imposed exile on the other side of the world; a grandfather whose dying days are spent compiling an anecdotal dictionary of reclaimed words and cultural values; and a 19th-century missionary whose despairing letters detail “deeds of infamy”. The Yield illustrates how Indigenous history carries forward pain and sorrow yet also allows compassion, resilience, dignity, humour and humanity to flourish. Haunting and accomplished, the novel does not gloss over the realities of dysfunction in enunciating what was and what remains yet it gifts its readers an elegant exposure to Indigenous language and speaks of the endurance of family ties and a redemptive hope for the future.” Read my full review of The Yield here.