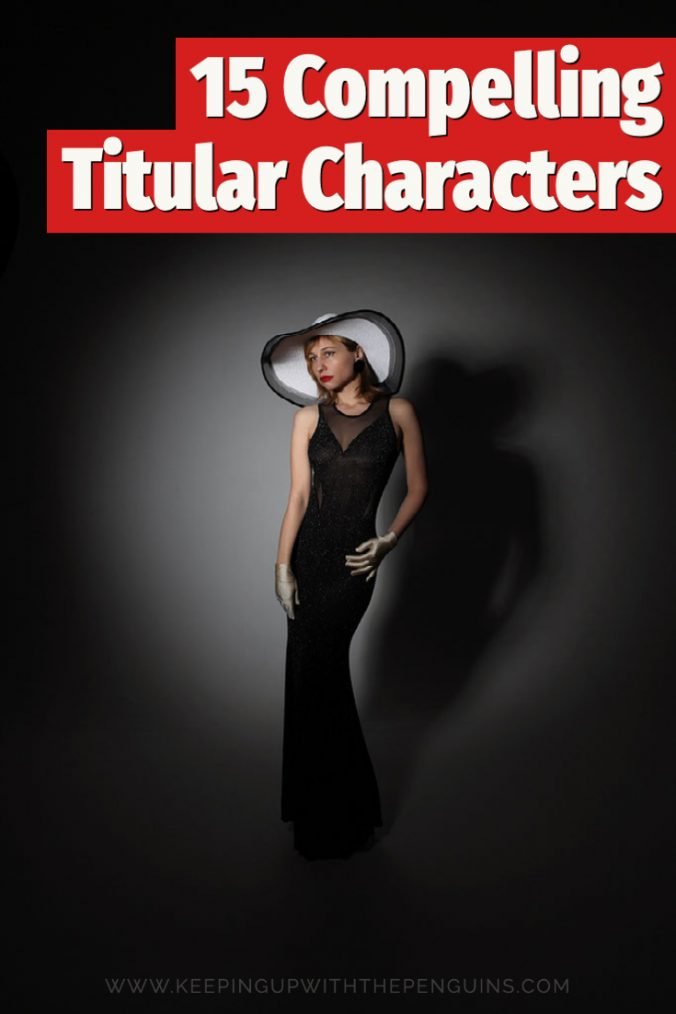 Charles Dickens once said that David Copperfield was his “favourite child” and I can see why. He’s rumoured to be the most autobiographical of Dickens’ characters (though that’s not really true, as best the experts can tell), but that’s not why. David Copperfield persists through all kinds of rotten luck – an abusive step-father, a hellish boarding school experience, shitty jobs, romances gone wrong – to reach a comfortable and happy late middle-age. Plus, he just seems like a decent bloke. His saga is every bit as compelling as you’d hope for a 19th century serial. Read my full review of David Copperfield here.

Eleanor Oliphant, the titular character of best-seller Eleanor Oliphant Is Completely Fine, is the kind of quirky oddball protagonist that seemed destined to win hearts and minds all around the world. Her social skills lack polish (to put it mildly), and she finds it easiest to stick to a regimented life of work, vodka, and frozen pizza. That is, until circumstances throw her into the path of Raymond, the bumbling-but-big-hearted IT guy who shows her that maybe she can aim for more in life than just “fine”. Eleanor would probably be a prickly friend, but she’s a compelling character you can’t help but root for.

A Man Called Ove is – you guessed it – the story of a man called Ove, a crotchety old-before-his-time widower who doesn’t feel he has much life left to live. This curmudgeonly character is (eventually) begrudgingly charmed by his larger-than-life new next-door neighbours, and they help him find his way out of the darkness. I loved this book, loved-loved-loved it; it’s the perfect combination of hilarious and heart-breaking. Ove is one of those titular characters you wish you could have a coffee with (even though you know he’d complain all the while). Read my full review of A Man Called Ove here.

Here’s a titular character who isn’t the narrator – in fact, she doesn’t appear in the novel at all – but Rebecca’s presence looms large over everything. The narrator of Rebecca is the second Mrs de Winter, having been swept off her feet by the enigmatic Mr de Winter in sunny Monte Carlo. When she moves into his grand estate at Manderley as his wife, she finds she cannot escape the memory of Rebecca, the wife that came before. She seems to lurk in every shadow, around every corner, and the housekeeper Mrs Danvers seems determined to keep her memory alive at any cost. But why? What made Rebecca so special? And will the second Mrs de Winter ever be able to shake the woman’s ghost? Read my full review of Rebecca here.

We Need To Talk About Kevin by Lionel Shriver

You can understand Eva Khatchadourian’s desperation to talk about her son, Kevin, in Lionel Shriver’s We Need To Talk About Kevin. After all, the kid is responsible for a heinous act of mass murder, a school shooting. Through a mother’s desperate plea, we try to understand the titular character, and what drove him to attack his fellow students and school staff. This haunting novel is an interrogation of nature versus nurture, the burden of caregiving unduly weighted towards mothers, and the futility of trying to make sense out of personal tragedy.

Beloved is an adjective (“greatly loved; dear to the heart”), a noun (“a person who is greatly loved”), and the moniker adopted by the looming specter at the heart of Toni Morrison’s heart-wrenching novel. Sethe, a formerly enslaved woman, buried the body of her unnamed child under a tombstone engraved with one of the only words she could recall from the funeral service. Years later, haunted years in a Cincinnati home that seems to be under attack from a malevolent spirit, Sethe’s past manifests in the form of a young woman, Beloved. This name – of the character and the book – is steeped with multiple meanings and deep significance. Read my full review of Beloved here.

Arthur Less, the titular character of Andrew Sean Greer’s Pulitzer Prize-winning novel, is a bit of a sad sack. He believes himself to be “the first homosexual to ever grow old”. When his much-younger ex-lover invites him to his wedding (to a more age-appropriate beau), Arthur Less seeks any reasonable excuse to not attend. Over the course of Less, he accepts every half-baked invitation to every poorly planned literary event around the world, and hits the road hard. Yes, Arthur Less is a bit of a fuck-wit, prone to pity parties, but it’s endearing somehow. He’s one of my all-time favourite titular characters. Read my full review of Less here.

Jane Austen herself described the titular character of her novel Emma as “a heroine whom no one but myself will much like”. Not to contradict the queen of English literature, but I liked Emma very much. Yes, she was annoyingly wealthy and beautiful, and a chronic sticky beak, but she was also determinedly independent and capable of learning from her mistakes – which puts her a head above a lot of fictional heroines of her era. Even though she’s the titular character, the novel isn’t really about her, per se; it’s actually a satirical novel about manners, hubris, and the perils of misconstrued romance. Read my full review of Emma here.

Alice, the character at the heart of Still Alice, is a fifty-something year-old woman facing a terrible fate by the end of the novel. Though it begins with her as an active professional with a full and busy life, the inciting incident sees her diagnosed with Early Onset Alzheimer’s Disease. Slowly, she begins to lose the things she holds most dear: her memories, her cognitive function, her capacity to understand and engage with the world around her. Deep down, though, she is (as the title suggests) still Alice. This is a very touching story about one woman’s battle with an awful and insidious illness. Read my full review of Still Alice here.

Did you know that in the original draft of Anna Karenina, Tolstoy wrote the titular character as an ugly woman? As the story developed, however, he found that it was actually beauty that made her more unappealing. The character at the centre of this classic of Russian literature is a divisive one, to say the least. Some readers see her as a tragic heroine of a doomed love story, a victim of her circumstances, while others see her as a villain who brings her own unfortunate end upon herself. If you want to make up your own mind about her, you’re going to read all of the 800+ pages of the final, finished work. Read my full review of Anna Karenina here.

Daisy Jones And The Six by Taylor Jenkins Reid

Technically, there are seven titular characters in Daisy Jones And The Six (count ’em!), but the one that counts the most is the one who gets star billing. Daisy Jones has your typical tragic beautiful-rich-girl backstory: she was born to parents more interested in society than her, she spent her youth bouncing from bad decision to bad decision but indulged by everyone around her, and she holds simultaneous-if-contradictory unshakeable self-belief (she can be a world-famous singer without training or hard work) and deep self-loathing (which she numbs with drugs and alcohol). Daisy Jones is a train-wreck that will captivate you. Read my full review of Daisy Jones And The Six here.

Stoker didn’t write the first vampire novel (Dracula was published in 1897, and there were at least a handful of others that appeared before that), but his titular character has certainly been the most enduring. The creepy undead vampire villain has haunted the nightmares of countless readers for well over a century now, and he doesn’t seem destined to fade from popular consciousness any time soon. Granted, these days he seems a bit more camp than creepy – we’re all very familiar with the concept of vampirism and The Dracul, which drains some of his power to spook – but his name remains synonymous with the scary blood-sucking creature that might enter your home if you’re fool enough to invite him in. Read my full review of Dracula here.

Charlotte Brontë has been called “the first historian of private consciousness”. She revolutionised the art of first-person fiction with the titular character of Jane Eyre. Jane is an intensely emotional young woman, and through her we are immersed in her world. She’s a character that manifests the frustrations of women of the time, making the novel a blatant proto-feminist call-to-arms. And, as though Brontë foresaw the shortened attention spans and impatience of today’s readers, Jane’s intensity and determination is counterbalanced with a perfectly sharp wit, drier than a good martini. Read my full review of Jane Eyre here.

Rodham is a particularly interesting one on this list, because the titular character is also a real-life one. Curtis Sittenfeld’s novel imagines the life of Hillary Rodham Clinton had she never married the man who would go on to become president, Bill Clinton, an alternative history that reveals “what could have been”. The New Yorker, reviewing the book, accused Sittenfeld of presenting a “less controversial Hillary” than her real-life counterpart, but even if that’s the case, there’s more than enough gossip juice in this book and readers gulp it down. It’s an incredible premise for a novel, and a well-timed antidote to the bin fire of politics and pandemics in 2020.

And here, we have TWO interesting titular characters for the price of one – Jonathan Strange and Mr Norrell! Set in 19th century England, this speculative historical novel posits that magic once existed but vanished from the world, until it returned with these two gentlemen. They represent a binary of sorts: teacher/pupil, studious/wild, practiced/improvisational… both are compelling in equal measure. This is one of those books that you wish more people would take the time to read; it’s an undertaking, but it’s worth it(!), and you’ll be desperate to talk it over with someone once you’re finished. Read my full review of Jonathan Strange and Mr Norrell here.