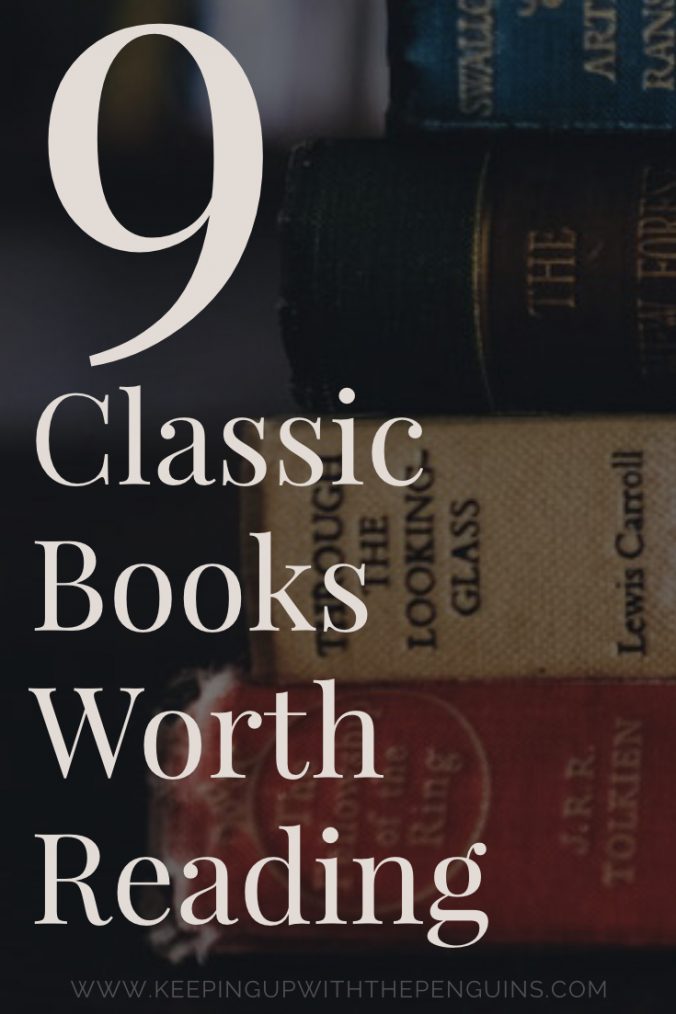 Reading the classics can be tough, there’s no doubt about that. Many of them are written with old and unfamiliar language conventions, there’s all kinds of cultural references that have since fallen from collective memory, and the content isn’t always that relatable. I think, though, that most people are scared of classic books for a different reason. They worry that they’re not “smart enough” or “well read enough” to understand or enjoy them. I know that’s how I felt before I started the Keeping Up With The Penguins project. I was sure any classic book I tried to read would go right over my head. Now, having read a lot of the classics on my original reading list, I’ve changed my mind. I can guarantee that reading the classics won’t always be as difficult or as scary as you think. I posted earlier this year about how to read more classic books, but if you’re struggling to figure out where to start, here’s a list of nine classic books worth reading.

Charlotte might have been the most duplicitous and judge-y of the Brontë sisters, but in my view she also wrote the most accessible books. Wuthering Heights, from her equally-revered sister Emily, was really quite complicated and dark and I struggled with it, but Jane Eyre was fantastic! There are no real language barriers to overcome, the characterisation was superb (in fact, Charlotte was once called “the first historian of the private consciousness”), and the story was quite straightforward. Of course, the leading man, Mr Rochester, is problematic AF and you do have to take off your feminist-ideals hat to enjoy the romance properly, but if you can manage that, you’ll find a lot to love in this classic book. Read my full review here.

Arthur Conan Doyle is probably the only doctor in the history of the world who had to use writing as a side-hustle to earn some extra cash. That’s how he came to write The Adventures Of Sherlock Holmes, a series of extremely popular mysteries featuring the character now considered to be the world’s most famous fictional detective. I love recommending this collection to people who are a bit time-poor or find themselves easily distracted while reading; the stories are short, Doyle’s economy of language was masterful, and they’re non-chronological, meaning they can be read in any order. Most of all, they’re extremely enjoyable and highly satisfying. If you like the BBC’s Sherlock series, you must give the original a go. Read my full review here.

Long time Keeper-Upperers are probably shocked to see Pride And Prejudice on this list. I don’t blame them: I dragged my feet for so long on this book. But when I finally sat myself down, and rolled up my sleeves, and dove in to Austen’s best-loved work, I found myself pleasantly surprised. It’s a great Austen for beginners, because the dialogue and language don’t feel too stilted, and the romance will be familiar to anyone who has ever read a book or seen a movie. Lizzie and Darcy’s relationship has been adapted, interpreted, satirised, and re-written so many times, it’s basically an archetype at this point. Read my full review here.

I think a lot of people are put off David Copperfield by its sheer size; most editions run to 1000+ pages, and my own copy had to be published in two volumes because it was too long to hold together as a single book. It’s probably not a good one to pick up if you’re not in the mood to commit to one story for a good long while. That said, Dickens called David Copperfield his “favourite child”, and I can see why. It’s a beautiful, clever, epic tale of a Victorian man’s life, styled as an autobiography, with something for everyone: action, adventure, mystery, romance, politics, and more. I said in my review that I “devoured the thing like a drunk woman eating a kebab”, and I think that sums up pretty well why I think it’s one of the best classic books worth reading. Read my full review here.

I’ve said it before and I’ll say it again: it is crucial – CRUCIAL! – that when you pick up a copy of Little Women for the very first time, you find an edition with a really good introduction that explains Louisa May Alcott’s life and politics for you before you begin. Her story of the four March sisters in Civil War-era New England is often written off as sentimental fluff, a “book for girls”, which is a damn shame. I think it’s largely because people don’t take the time to understand Alcott’s motivations for writing the book, the position she held in society and in her family, and the subtle ways in which she subverted the tropes of a “moral story for young women”. If an edition with a great introduction isn’t forthcoming, you can always start with my review, where I detail a lot of the aspects I found interesting. I highly recommend giving this one a go around Christmas time; the iconic opening scene will get you in the holiday spirit. Read my full review here.

I think most non-academic readers groan when they encounter a book written in dialect. When it’s done poorly, it makes reading the book a real chore. Luckily, Mark Twain’s The Adventures Of Huckleberry Finn flows so naturally you won’t even notice the clever ways he manipulated language to depict the Southern drawl. Huck Finn is a confronting novel, at times, and certainly controversial, for many reasons: violence, racial epithets, white-saviour storylines, all of which have led to it being challenged and banned at various points in time. But it’s still a classic book worth reading! The characters of Huck and Jim jump off the page, and you won’t be able to pull yourself away from their adventures down the Mississippi River. Read my full review here.


The Age Of Innocence – Edith Wharton

Fine, I’ll concede: if you struggle with subtle stories, The Age Of Innocence might not be the one for you, but maybe you should give it a go anyway. I was constantly surprised reading Wharton’s Pulitzer Prize-winning novel; it seemed to move so slowly, and yet she could find a way to make an important point or a pithy social critique while describing a house or a garden bed. Her female characters in particular are beautifully complex and flawed, and I fell in love with the way that Wharton used them to make ever-relevant comments about the role of women in society. Plus, it’s the story of a social scandal on the scale of Brangelina; you’ll come out of this book on either Team Countess Olenska, or Team May Welland, I guarantee it. Read my full review here.

Speaking of social critiques, The Grapes Of Wrath is eerily current. Save for a few technological advances, I would completely have believed (had I not seen the date on the inside cover) that this was a contemporary novel set pretty much in the present day. Its perspectives on capitalism, automation, climate change, class warfare, and workers’ rights are scarily relevant in a post-Trump and post-Brexit world. Plus, the story – especially its end (which I won’t spoil here, but I do in my review, be warned!) – is hauntingly beautiful, and the matriarch Ma Joad is now my favourite character in all of American literature. Read my full review here.

To say I approached Crime And Punishment with trepidation would be a gross understatement. I was fully convinced (with no true factual basis, mind you) that the Russian classics were dense and dull, and I would be in for a rough time with Dostoyevsky’s tale of a young man who tries to commit a moral murder. I was – I’ll say it loud and proud – absolutely wrong. This book had me cackling with laughter the whole way through, and finding myself (worryingly) relating to the anxious axe-murderer. Make sure you pick up the David McDuff translation, as I did – I can’t attest to any of the others, but he did a bang-up job! Read my full review here.

Of course, all books are worth reading in some measure, but I think these classic books have something special to offer, especially if you’re just wading into that part of the literary world for the first time. Have I skipped over your favourite classic? Got any other classic books worth reading to suggest? Drop them in the comments below (or over at KUWTP on Facebook!).