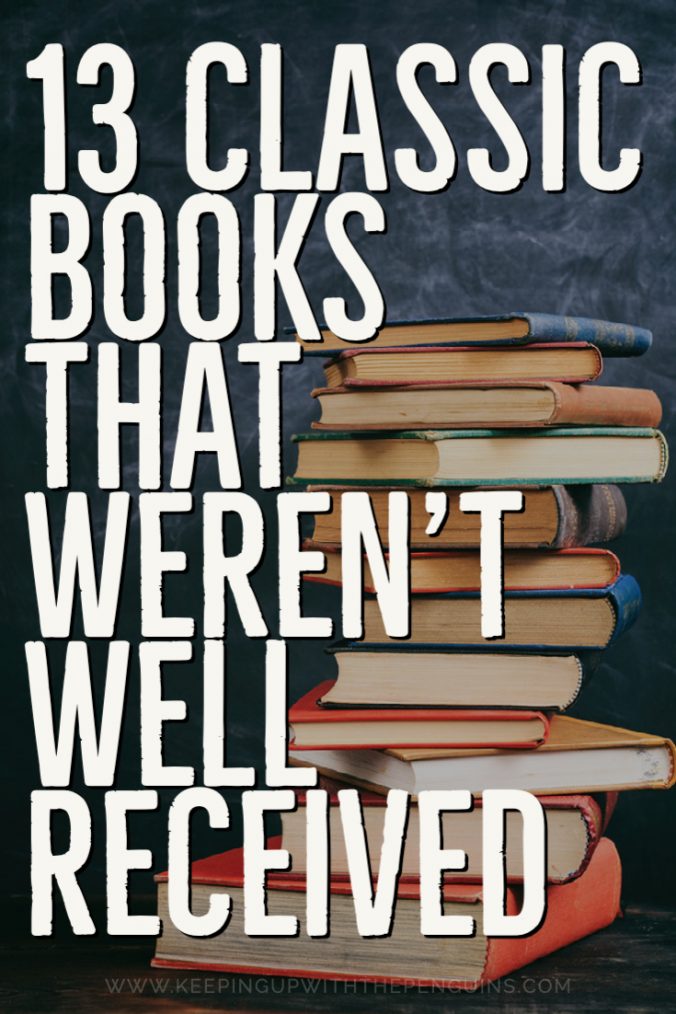 It’s easy to forget that some iconic books – classics that we were forced to read in high-school, that SparkNotes makes memes about now – weren’t always held up as the pinnacle of literature. Many of the “most loved” books today were woefully underappreciated in their own time. Some of them were downright derided. Here are thirteen classic books that weren’t well received… at first.

Brave New World – Aldous Huxley’s now-classic dystopia, complete with sex, drugs, and “feelies” – got some positive press upon its release in 1932. Philosopher Bertrand Russell praised it, saying that Huxley “has shown his usually masterly skill” and Dame Rebecca West called it Huxley’s “most accomplished novel”. But he faced some heavy criticism, too. Fellow sci-fi author H.G. Wells railed against Huxley for “betraying the future as a concept”. A review published in The Guardian was particularly savage: “the title which he gave to one of his earlier books, These Barren Leaves, is applicable to very much that he has written…. This book fails both as a satire and romance…. It is easier to exploit the possibilities of mental death than to meet the demands of creative life.” Read my full review of Brave New World here.

The Adventures Of Huckleberry Finn by Mark Twain

It might surprise you to know that The Adventures Of Huckleberry Finn was almost as controversial when it was first released in 1885 as it is today. As recently as 2016, the classic American novel was removed from one Virginia public school district, on the basis that it includes inappropriate language and racial slurs. 130 years prior, the Concord Public Library committee held a very similar view: “the veriest trash… rough, coarse, and inelegant, dealing with a series of experiences not elevating, the whole book being more suited to the slums than to intelligent, respectable people,”. They, too, chose to ban the book. Upon hearing that news, Twain is reported to have said “This will sell us another twenty-five thousand copies for sure!”. Read my full review of The Adventures Of Huckleberry Finn here.

The Brontës famously published their works using androgynous pseudonyms (Emily going by “Ellis Bell”), but that didn’t stop reviewers going to town on her only published novel, Wuthering Heights. Graham’s Lady Magazine wrote at the time: “How a human being could have attempted such a book as the present without committing suicide before he had finished a dozen chapters, is a mystery. It is a compound of vulgar depravity and unnatural horrors,”. The Examiner said “as a whole, it is wild, confused, disjointed, and improbable; and the people who make up the drama, which is tragic enough in its consequences, are savages”. Emily, being notoriously shy and reluctant to publish at all, probably didn’t read her own press – good thing, too, if those reviews are anything to go by. Read my full review of Wuthering Heights here.

Gone With The Wind by Margaret Mitchell

Even though Gone With The Wind was wildly popular with readers immediately upon release (it was the best-selling fiction book two years running, in 1936 and 1937), critics didn’t share their enthusiasm. Reviewer for The New York Times, Ralph Thompson, said “I happen to feel that the book would have been infinitely better had it been edited down to say, 500 pages… Very nearly every reader will agree, no doubt, that a more disciplined and less prodigal piece of work would have more nearly done justice to the subject-matter.” That’s a sick burn all on its own, but critics rightly also zeroed in on Mitchell’s deeply problematic and revisionist depictions of slavery, the Civil War, and the Reconstruction. Those (very justified) criticisms have only amplified over time.

I have been very vocal about my own dislike of The Great Gatsby, and I am pleased to report that many early readers and reviewers agreed with me. The novel – now considered one of the classic books of the Jazz Age – was considered a fall from form for Fitzgerald, “an inconsequential performance by a once-promising author who had grown bored and cynical”, and reviewers were “quite convinced after reading The Great Gatsby that Mr. Fitzgerald is not one of the great American writers of today”. The plot was also called “improbable”, and its style “painfully forced”. Fitzgerald was apparently so bummed out by these reviews that he signed off a telegram to his publisher: “Yours in great depression”. Read my full review of The Great Gatsby here.

One of the (many) funny things about Herman Melville’s Moby Dick is the contrast in its reception on different continents. In the U.K., where newspapers had a huge staff of experienced reviewers and literary critics, they called it “a phenomenal literary work, a philosophical, metaphysical, and poetic romance”, and “one of the cleverest, wittiest, and most amusing of modern books”. Meanwhile, in the New World (U.S.), where experienced critics were few and far between, baffled journalists trying to wade through Melville’s mountain of prose declared it “not worth the money asked for it, either as a literary work or as a mass of printed paper” and “a crazy sort of affair”. Of course, there are exceptions on both sides of the pond, but doesn’t that just prove the rule? Read my full review of Moby Dick here.

Look, examples abound that prove Ulysses should be on any list of classic books that weren’t well received. Even today, respected as a load-bearing pillar in the modernist canon, most readers and reviewers regard it with confusion more so than admiration or anything else. Some of my favourite Ulysses slams include Virginia Woolf writing in her diary that it was: “an illiterate, underbred book it seems to me: the book of a self-taught working man, and we all know how distressing they are, how egotistic, insistent, raw, striking, and ultimately nauseating,”. See also The Sporting Times, who wrote that it was “written by a perverted lunatic who has made a speciality of the literature of the latrine,”. Read my full review of Ulysses here.

Joseph Heller threw a decades-long tantrum when Catch-22 wasn’t received as well as he thought it should have been. Even though The New York Times initially called it “a dazzling performance that will outrage nearly as many readers as it delights,”, a second review in the same paper said “[it is] repetitive and monotonous. Or one can say that it is too short because none of its many interesting characters and actions is given enough play to become a controlling interest,”. Despite Heller’s big hopes, it didn’t win a single award, not even the much coveted Pulitzer Prize for Fiction, and Heller remained bitter about it until the day he died. Read my full review of Catch-22 here.

The Catcher In The Rye by J.D. Salinger

Angry teenagers forced to read The Catcher In The Rye in English Lit classes would be thrilled to know how poorly it was received upon its release in 1951. It was called everything from “disappointing”, to “a near miss”, to “wholly repellent”, to “peculiarly offensive”. Most reviewers seemed to take particular issue with the divisive protagonist-narrator, Holden Caulfield, whose adolescent angst was declared “wearisome” by the New Republic. Older wowsers didn’t like that he was running around getting drunk and trying to get it on with sex workers, either – a position that certain school board members still hold today, it would seem. Read my full review of The Catcher In The Rye here.

The Metamorphosis by Franz Kafka

Kafka was the very definition of “underappreciated in his own time”, and he knew it, too. His diaries and letters are full of laments about his work and his general malaise, self-deprecation taken to the extreme. Today, The Metamorphosis is his best-known work and widely regarded as one of the most brilliant allegories ever written – but it was barely read when it was first published in 1915, and even Kafka himself didn’t like it in retrospect. He wrote that he “[was] reading The Metamorphosis at home and find[ing] it bad,”, that he felt a “great antipathy” towards it and its “unreadable ending”. The bulk of Kafka’s other work wasn’t published until after his death, and it certainly wasn’t widely read or beloved until many years later.

Long before it was a HBO series, or the symbol of white feminist resistance against the Trump administration, The Handmaid’s Tale was a 1986 novel met with a reaction that could be best summed up as: “meh”. The New York Times said it “lacks imagination” (which is true, technically, given that Atwood has said time and again that everything she included in the book has happened or is happening somewhere in the world). It was also called, by various other outlets, “short on characterisation,” “thinly textured,” and (my personal favourite) “paranoid poppycock”. Read my full review of The Handmaid’s Tale here.

The Grapes Of Wrath was basically America’s first big Hate Read. In 1939, everyone was reading it and everyone had something to say about it. Steinbeck was attacked from both ends of the political spectrum, believe it or not: both accused him of being a communist, and publishing a book of propaganda. The Associated Farmers of California were particularly vocal in their displeasure, calling Steinbeck’s depiction of the treatment of migrating farm workers as a “pack of lies”. Steinbeck was also revealed to have ripped off the research work of comparatively-unknown writer Sanora Bobb, but that didn’t seem as important to anyone as the fact that he was “trying to make a political point” (that it… sucks to be poor?). Read my full review of The Grapes Of Wrath here.

The criticism of Lord Of The Flies began before it even hit the bookstore shelves. More than 20 publishers passed on Golding’s nightmare-fuel story about shipwrecked children turning to savages (I can’t imagine why). One called it “rubbish and dull, pointless,”. Even when he finally found a publisher willing to take a punt on it, they sold only a few thousand copies before it went out of print. The New Yorker called it “completely unpleasant”. How it went from the bargain bin to a Nobel Prize winner assigned reading in every English-speaking classroom around the world is beyond me. Read my full review of Lord Of The Flies here.

The Women Could Fly – Megan Giddings