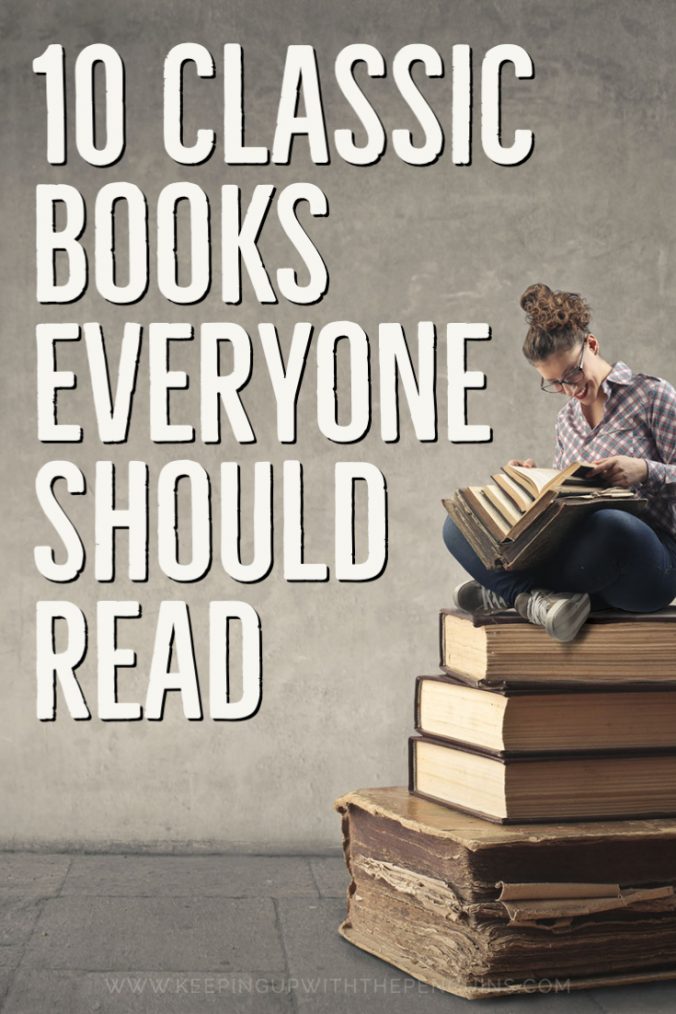 10 Classic Books Everyone Should Read

We all know I’m not a fan of “should”ing when it comes to books. The only “should” I really get behind is we should read books that give us what we need – whether that’s intellectual challenge, information, or plain ol’ fun. But if I had a dollar for every time someone asked me what classic books everyone should read, I’d be able to afford every book on my wishlist. So, bowing to public pressure, here’s a list of ten classic books everyone should read (and why).

When I first read The Grapes Of Wrath, I was really struck by how sadly applicable it could be to our current changing climate. (Well, that and the stunning writing, and the sucker-punch of an ending – Steinbeck really needed therapy, sheesh!) In the late 1930s, families struggling to recover from the Great Depression migrated in huge numbers to states like California, in search of work and stability. We’re already seeing the same thing happen to populations impacted by rising sea levels, extinction events, and natural disasters. Sorry to start out on such a bummer note, but this is one of the classic books everyone should read because it’s a scary glimpse into what’s going on in the present. Read my full review of The Grapes Of Wrath here.

Selfishly, I say Little Women is one of the classic books everyone should read because it’s so widely misrepresented and misunderstood. It’s almost become a cliche, a shorthand for cloying fluff literature – and yet, Louisa May Alcott wrote it hoping for the complete opposite. She was under pressure from her publishers to write a “good moral story for girls”, and she fulfilled their request while also subverting all of the tropes of the time. The protagonist wasn’t genteel, wasn’t sweet, and didn’t end up with the novel’s “hero”. Alcott used the story to address major social problems, including poverty and suffrage. She was a feminist hero before her time, and we all really should be reading her as such. Read my full review of Little Women here.

Their Eyes Were Watching God by Zora Neale Hurston

Do you remember Chimamanda Ngozi Adichie’s TED talk about the danger of a single story? She was speaking mostly in the context of African literature and the stories of African women, but it definitely applies more broadly. In this case, Their Eyes Were Watching God is one of the classic books everyone should read because it swims against the current of the ‘single story’ about being Black in America in the early 20th century. Naturally, narratives about explicit racism and the intergenerational trauma of slavery are at the fore – as they should be – but this book is brilliant in that it is about Black issues, and written by a Black author, without being about either of those things. It should definitely be included in all American reading lists, for that and for many other reasons. Read my full review of Their Eyes Were Watching God here.

The Little Prince is one of the classic books everyone should read because it will open your heart (and your tear ducts). It’s chock-full of gems of wisdom, like “Grown-ups never understand anything by themselves, and it is exhausting for children always and forever to be giving explanations,” and “It is only with the heart that one can see rightly; what is essential is invisible to the eye.” Plus, even the new editions come with truly gorgeous watercolour illustrations that de Saint-Exupéry slaved over while preparing the original manuscript. Read my full review of The Little Prince here.

The Adventures Of Sherlock Holmes by Arthur Conan Doyle

The Adventures Of Sherlock Holmes is one of the classic books everyone should read if they’ve got any kind of interest in how literature – specifically literary mysteries – “work”. Despite his ambivalent feelings about his most famous and beloved character (and “ambivalent” is putting it very mildly), Doyle wrote stories that are a true masterclass in economy of language and the importance of pacing. Time after time, Sherlock’s cases are clever, inventive, and keep you turning pages. Plus, they’re plain old fun – even if classic books aren’t usually “your thing”. Read my full review of The Adventures Of Sherlock Holmes here.

The Russian classics have a reputation for being long and depressing – and it’s not unwarranted. But it is really unfair that Crime And Punishment gets tarred with that brush! I read the McDuff translation, which may make a difference (translated classic books that everyone should read are a tricky beast), so make sure you’re picking up that one if you’re taking my recommendation. It’s some of the most compelling psychological fiction I’ve ever read, and it’s hilarious to boot. You’ll find yourself totally relating to an axe murderer who just can’t help getting in his own way. Read my full review of Crime And Punishment here.

If you’re after a cracking classic read, one that will pull you along without all the pathos of Wuthering Heights (yes, that’s a dig at Charlotte Brontë’s melodramatic little sister), you must check out Jane Eyre. Charlotte has been called the “first historian of private consciousness” for the revolutionary way she wrote a young woman’s narrative – and the love story is as steamy as mid-19th century literature can get. Plus, when you read it alongside Wide Sargasso Sea, it will teach you a lot about perspective in stories (fictional and otherwise), and the silencing of voices throughout literature. Read my full review of Jane Eyre here.

Pride And Prejudice by Jane Austen

With the recent contemporary romance boom on #Bookstagram, you might think you’ve got more than enough enemies-to-lovers books to be getting on with. Pride And Prejudice is the OG enemies-to-lovers, the point where it all began, and it’s definitely one of the classic books everyone should read. I didn’t have an easy ride with it – I started and abandoned it no fewer than six times before I finally got on a roll – but, like all of Austen’s works, my appreciation for it has only grown over time. I dare you to find a contemporary romance with more smouldering disdain and tortured yearning! Read my full review of Pride And Prejudice here.

You’re probably guessing that Frankenstein belongs on a list of classic books everyone should read for feminism(TM) reasons. You’re not wrong, but there are plenty of other reasons it belongs here, too. This book represents the origins of science fiction, a genre that has influenced literature and the broader cultural zeitgeist more than we realise. Plus, when you really think about it, Shelley was giving us a super-timely warning about hubristic tech bros who spend way too much money and time on projects when they have no idea what they’re doing and no regard for the consequences. (Everyone on Twitter knows what I’m talking about…) Read my full review of Frankenstein here.

The Stranger Beside Me is considerably younger than a lot of the other classic books everyone should read, but it’s a classic of the true crime genre so I say it counts! It’s not all salacious insider details about one of the most horrifying serial killers to terrorise America’s cities, either. It has an important message for us all about how appearances can be deceiving, and how we should listen when our spidey senses start tingling. Ann Rule worked alongside Ted Bundy for years without (initially) knowing that he was raping and murdering women for kicks. It will make you look at all of your casual relationships and acquaintances a little differently. Read my full review of The Stranger Beside Me here.