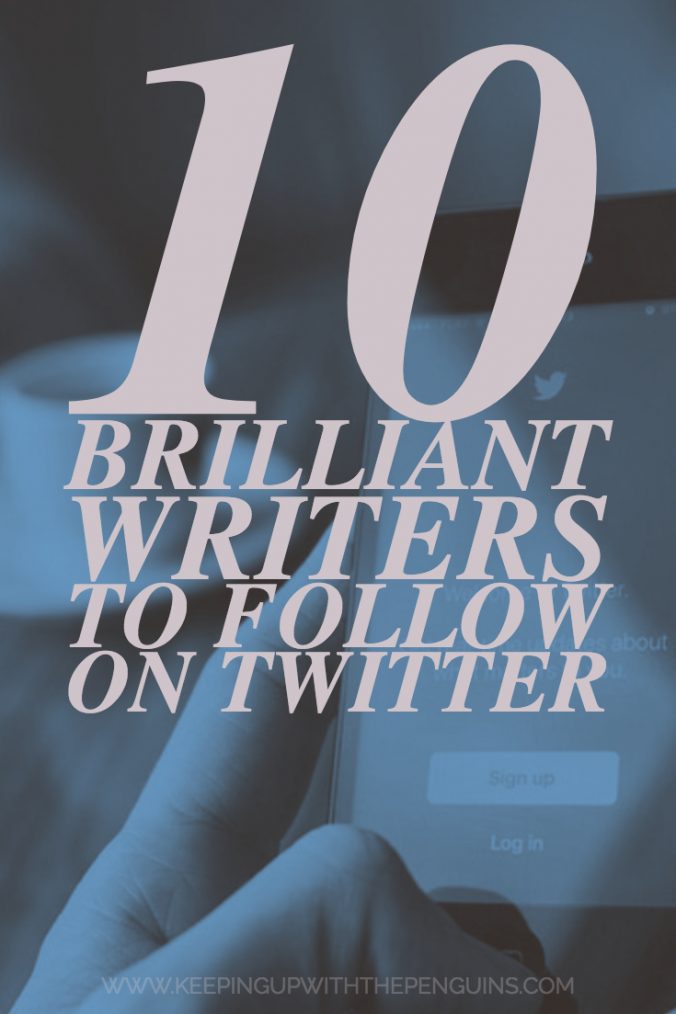 I think one of the greatest tragedies of our time is that Oscar Wilde never had Twitter. I realise that makes me sound like the most millennial millennial that ever millennial-ed, but seriously! Take a look over his body of work (I reviewed The Picture of Dorian Gray this week, by the way), and you’ll quickly realise that his Twitter feed would have been absolute fire. The good news is that today’s writers do have Twitter, and I can tell you right now that they would have made him proud! Whether you’ve been Tweeting for years or you’re just now setting up your account, here’s my list of 10 brilliant writers to follow on Twitter.

If you haven’t seen copies of Little Fires Everywhere… well, everywhere, then you haven’t been paying attention. Celeste Ng’s success is well-deserved, of course, but her Twitter feed is criminally underrated. To start with, her handle is hilarious – she’s not afraid to make fun of herself and the world around her.

I don’t care if you like Harry Potter or not, J.K. Rowling’s Twitter is a must-read. She comments on everything – from Harry Potter fan theories to politics to Eurovision – and uses the platform to make direct contact with her fans. She is a Twitter master!

Apparently the Australian commentator called @surieofficial‘s stage invader ‘some absolute cockhead’ and I don’t want to hear another word about Australia being in #Eurovision ever again.

I have been following Amna Saleem for quite a while, and I love finding her Tweets in my timeline, like hilarious hidden treasures. She is a comedy writer from Scotland, and her insights on race, culture, and family life will make you weep (appreciatively).

I’m not going to lie, my fangirling over Jennifer Down is almost creepy. I got to meet her at the Sydney Writer’s Festival, and it was pretty much the highlight of my year. Of course, she’s a brilliant writer (buy her incredible books here and here!), but her Twitter feed is all killer, no filler. I have literally lol’d on pretty much a daily basis ever since I followed her, she is just so damn relateable. Do yourself a favour…

me trying to plough through emails as quickly as possible: just typed “Dear many thanks for your prompt response” straight into the subject line pic.twitter.com/nE9oTNibE7

Kaz Cooke wrote basically the only pregnancy book worth reading (Up The Duff), and her feed is full of cartoons, hot takes, and the best of Aussie baby-boomer real talk.

Damnit, nobody called me a sexual degenerate when I became an @nlagovau ambassador. When I go in next week I’m going to hitch up my spencer and show my caesarean scar to the tune of Ta Ra Ra Boomdeay. Solidarity! https://t.co/rniFpT9fvo

You might not have expected to see someone like Behrouz Boochani on this list, but his might just be the most important account here. Behrouz Boochani is a novelist, documentary filmmaker, and journalist, currently detained on Manus Island by the Australian government for the “crime” of seeking asylum in Australia. His Tweets are eye-opening, terrifying, and motivating. It is the best inside account we have of what is being done to asylum seekers in our name…

Wish Royal Commission would investigate how immigration spent $10billion in Manus & Nauru. Big corruption under secrecy and exile, companies like IHMS need to be investigated.#Manus

Roxane Gay just goes from strength to strength – Bad Feminist, then Hunger, then Difficult Women… and her Twitter feed is full of the same brilliance. But, if I’m being really honest, the main reason I follow Roxane Gay is right there in her bio: “If you clap, I clap back”. She promises, and she delivers. Her clap-backs are epic! I have no idea where she finds the emotional wherewithal, but damn, I’m here for it!

No. I put my name behind what I say. https://t.co/0hWWP0LjFm

Rebecca Slater wrote my favourite piece of 2018, it is hands-down one of the best things I’ve ever read, and she is the one to fucking watch, I’m telling you! Get all over her Twitter right now, so you can say you followed her when…

Maxine Beneba Clarke’s Twitter feed covers just about everything of interest (to me): politics, race, haters, poetry, prose, literacy, journalism, real-talk, and – most of all – hella relateable comedy. Come for the mind that brought you The Hate Race, and stay for excerpts from conversations with children that will have you howling.

Don’t hate me cause I’m tweetable.

I first discovered Quinn when he wrote what I considered to be the definitive series of essays on the Australian marriage equality vote of 2017, and I’ve been following his work ever since. His poetry is unflinching and beautiful, his book is incredible, and his Twitter feed is everything queer, sarcastic, and fantastic.

Honourable mentions, of course, to @LeeLinChin and @cher – not technically authors (yet), but two Tweeters that make the platform worthwhile, as far as I’m concerned. If either of them ever leave Twitter, I will follow them in protest. And, well, there’s me! @shereestrange is my account with me being me, and @KUWTPenguins is the account for this blog.

Underused word of the day: strumpet.

Do you have any other favourite writers on Twitter? Make sure to drop their handles below for me (or share the love over at KUWTP on Facebook!).

To Kill A Mockingbird – Harper Lee