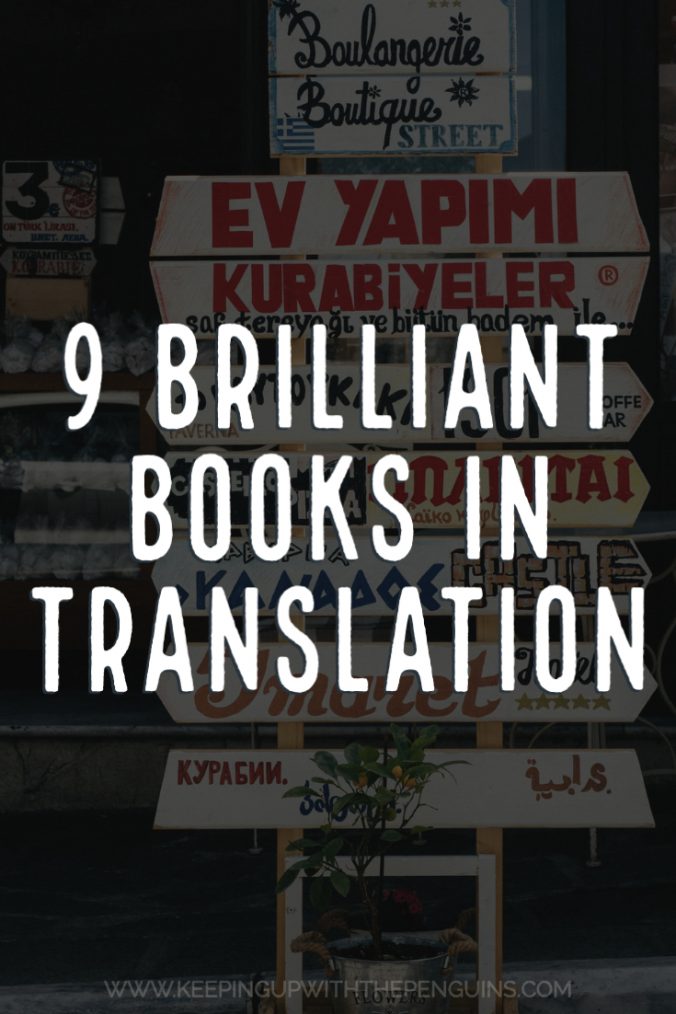 As a monolingual reader, I am SO grateful for access to books in translation. Earlier this week, I read and reviewed A Man Called Ove by Swedish writer Fredrik Backman. That would not have been possible without the hard work and dedication of the translator Henning Koch, who took the original Swedish (En man som heter Ove) and transformed it into a story I could understand. I’ve talked before about the world-changing magic of books in translation, and today I thought I’d expand on that by giving you a round-up of some of my favourite translated book recommendations. Here’s a list of brilliant books in translation…

My Brilliant Friend by Elena Ferrante

I’m always worried when reviewing and recommending My Brilliant Friend that I cannot possibly do this beautiful, breathtaking book justice. Seriously, I cannot understate just how brilliant (ha!) it is. It was first published in 2012, the first in Ferrante’s series of Neapolitan Novels, and it follows the lives of Lena and Lila, two young girls growing up in the cruel and sometimes violent community of mid-20th century Naples. Ferrante’s true identity is, of course, a mystery (she writes under a pseudonym), and one that gets a lot of attention – but I think we should expend that energy praising her translator, Ann Goldstein, instead. The way that she has managed to retain the rolling lyricism of the original Italian in this English edition is just… brilliant! Read my full review of My Brilliant Friend here.

This slim little book contains the bizarre but endearing story of a Japanese woman who struggles with social convention, and finds comfort in the rhythm and routine of her “career” working in a local convenience store, where every relationship is transactional. Convenience Store Woman is actually the tenth book by Sayaka Murata (she’s a big-big-big literary star in Japan, named Woman Of The Year by Japanese Vogue in 2016!) but this is the first to be translated into English. Her translator, Ginny Tapley Takemori, has also previously translated two short stories of Murata’s, and is working on the forthcoming Earthlings, slated for release later this year. Read my full review of Convenience Store Woman here.

No Friend But The Mountains is different from the other books in translation listed here, in a few key ways. The work of translation was done as the book was being drafted (rather than from a completed manuscript). This is because, at the time of writing, Behrouz Boochani was detained on Manus Island by the Australian Government. He and Omid Tofighian wrote the entire thing in concert (translating from Farsi to English), by exchange of WhatsApp messages, to tell the truth of what was happening to Behrouz in Manus Prison. The book went on to win the Victorian Premier’s Prize in 2019, and has already been deemed an essential work of Australian literature (like it or not, this is a horrifying-but-true Australian story). Thankfully, Behrouz has since been released from Manus, and is currently in New Zealand.

The Eighth Life by Nino Haratischvili

The days of the sweeping multi-generational epic are definitely not over! The proof is in The Eighth Life by Nino Haratischvili. The fine folks at Scribe Publishing were kind enough to send me a copy for review last year, published for the first time in English (written originally in German, though Haratischvili has been writing in both German and Georgian since she was twelve years old). Don’t be intimidated by its size, and the scope of its story (several generations over a crucial period in world history). The Eighth Life will sweep you away. It falls smack bang in the middle of the Venn diagram between Leo Tolstoy, Gabriel Marcia Marquez, and Elena Ferrante. Read my full review of The Eighth Life here.

A Horse Walks Into A Bar by David Grossman

A Horse Walks Into A Bar takes a lot of risks… but, I suppose, one must go big or go home. Of all the work that goes into translation, surely the hardest has to be to translate comedy: even the title, a trope of stand up comedy, surely wouldn’t translate easily into every language and culture. Still, Jessica Cohen pulls it off! And it’s just just the lols, it’s also the deep and despairing moments, the unraveling of the protagonist in its short timeline (just two hours), that are done spectacularly well. Grossman wrote this book in Hebrew, and the English-language translation went on to win the Booker International Prize in 2017.

The Odyssey by Homer

Another magical thing about books in translation: if they hang around long enough, and remain popular enough, other people start to have a go and you end up with multiple translations that bring all kinds of new wonders to light. Believe it or not, even though Homer’s The Odyssey has been translated into English many dozens of times since it was first written in Ancient Greece, Emily Wilson’s translation is the first to be completed and published by a woman. Wilson is a Professor of Classical Studies at the University of Pennsylvania, and looks at this bedrock work of poetry through a contemporary feminist lens. The canon has too long belonged to men, and works like Wilson’s are crucial in diversifying and expanding our perspectives.

It only seems fair that, in this list of brilliant books in translation, I include an example that is both a shining star and a massive #NameTheTranslator fail. I love this edition of Madame Bovary, which was the highly influential debut of French novelist Gustave Flaubert and caused a huge stir upon release. I read it and loved it, the searing insight into the patriarchal constructions of femininity and madness… and yet, when I looked for the name of the person who had worked so hard to bring this brilliant book into my native tongue, I couldn’t see it anywhere. Not on the cover, not in the prefatory materials, not even on the publisher’s website. There is just one, unattributed, note in the beginning that says: “The translator would like to record his gratitude to his wife, Teresa Russell, who read the translation in manuscript and made many valuable suggestions”. I mean, hats off for giving your wife credit, mate, but surely you deserve some too! So, this one goes out to the anonymous translator of Madame Bovary, and to all other uncredited and unacknowledged translators everywhere, who toil in silence on our behalf.

So, as we’ve established, every version of a book in translation is different: in some ways, the translator re-writes a new book each time. That’s why, when I highly recommend people read Crime And Punishment by Fyodor Dostoyevsky (which I do, by the way), I hasten to add that they should secure this edition, translated into English by David McDuff, for their first time. See, I just can’t be sure that other translations – wonderful as they might be – will capture the same humour, pathos, and beguiling nature of this story about a literal axe murderer. I came to Crime And Punishment, knowing it to be a Russian classic, assuming it would be dull, dense, and depressing – and I can assure you that David McDuff’s version is none of those things. Read my full review of Crime And Punishment here.


What are your favourite books in translation? Add to the list in the comments below – I’m always on the hunt for more!