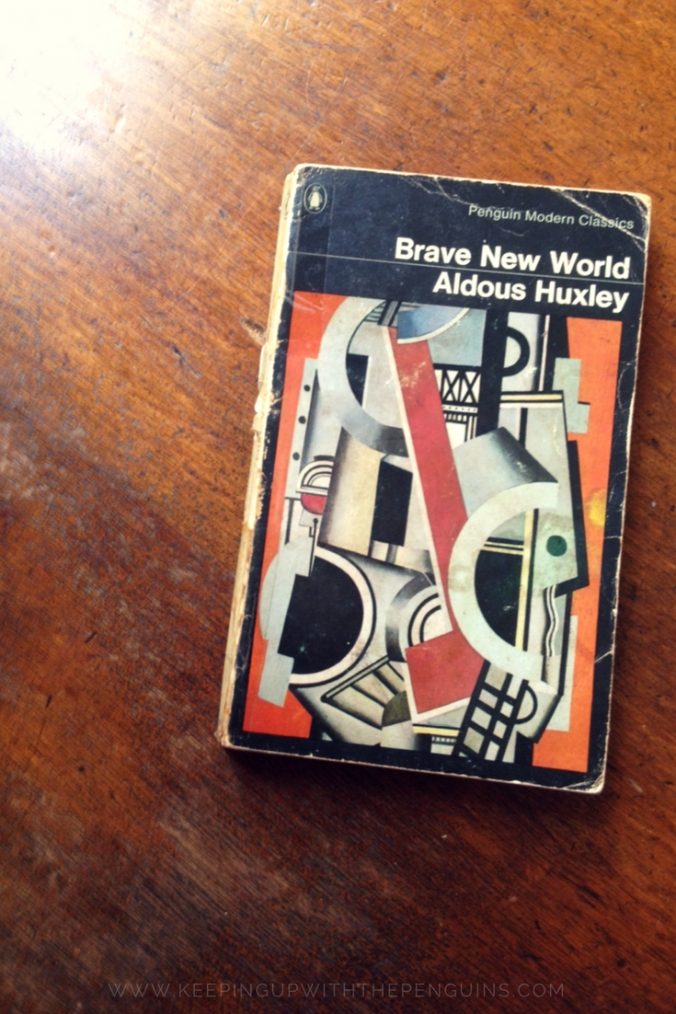 If you’ve been reading the news, you’ll know that quoting mid-20th century dystopian novels is really “in” right now. Since we started the dumpster fire that is the Trump presidency, a lot of these older works have startling new relevance. I’ve got George Orwell’s 1984 covered (it’s one of my long-time favourite books), but I’m sick of chuckling along obliquely when people start talking about Aldous Huxley’s Brave New World.

Brave New World is kind of like 1984’s homely cousin. There was some beef between the authors when Orwell accused Huxley of ripping off his plot (Orwell believed it was just a bit too similar to We by Yevgeny Zamyatin). Huxley always maintained that Brave New World was actually inspired by the utopian novels of H.G. Wells. He originally intended the book to be a satire, a “negative utopia” sending up all the novels that implied humanity could solve all of its social and economic issues with science.

But then, as Huxley later wrote to a friend, the author “got caught up in the excitement of [his] own ideas”, and he ended up creating an entirely dystopian future where developments in reproductive technologies and psychological theories (sleep-learning, classic conditioning, etc.) have turned society on its head… and not necessarily in a good way. Brave New World was essentially the Black Mirror of the 1930s.

The foreword in this edition is pretty weird. Huxley wrote it himself, and his main message seems to be: “a writer should never feel remorse for the mistakes they made in their books and it’s no use trying to go back to fix them, but I could totally fix all the problems in Brave New World if I wanted to, and here’s exactly how I’d do it…”

Brave New World was published in 1931, and set 600 years in the future from then (so, the year 2540 to us, or the year 632 “After Ford” for the characters). Citizens of the Brave New World (called the “World State”) are engineered in artificial wombs, indoctrinated as children into predetermined castes, and kept calm with the constant use of a drug they call “soma”. Epsilons (the lower caste) are the giants, and the Alphas (highest caste) stand on their shoulders – without Epsilons, the “utopian” society would collapse.

This is a metaphor for capitalism, sexism, racism, and basically every other power structure you can think of (in case it wasn’t obvious).

Around the time he started to write Brave New World, Huxley was really freaked out by the Great Depression (1931). There was mass unemployment and changes to the currency in Britain, leading to a lot of uncertainty. A trip to the United States didn’t help Huxley much; there, he saw youth culture, commercialised and promiscuous and narcissistic (he would have shit himself if he’d come forward in time and discovered Instagram). He also came across a copy of My Life and Work by Henry Ford (yes, of the Ford Motoring Company), which greatly influenced Huxley’s approach to the book. See, the whole book is based around the fear of losing individual identity and ceding free will. Ford is actually revered as the creator of the World State – not quite a deity, but close (so, instead of saying “oh my god”, people in the World State say “oh my Ford”). I wonder what you’d pay for that kind of product placement now… 😉

The story kicks off with the beautiful Lenina (who works in a “hatchery”, breeding babies) and the dumpy Bernard (a psychologist who hates everything) taking a holiday together. They visit the natural world outside the confines of the World State (called the “Savage Reservation”), and there they meet Linda. She was once part of the World State, but got dumped in the reservation when she found herself naturally pregnant. Everyone in the World State is encouraged to fuck one another silly, but natural pregnancy and procreation is a huge no-no, so she’s basically shunned. Bernard can’t resist the opportunity to rock the boat a little back home, so he brings Linda and her son (John) back to the World State with him.

Things start to fall apart. Bernard parades John around like a performing monkey, which garners a lot of attention, but John really hates it. John has a passion for Shakespeare (considered smut in the World State) and quotes him endlessly (don’t worry, it’s mostly the well-known plays, so no prior knowledge of the Bard is required to follow what’s going on).

Linda reveals that John’s father is actually one of the bigwigs in the World State government, leading to a huge fall-out. Around the same time, Lenina hits on John, but he goes full fuck-boy and attacks her, calling her a slut. There are a lot of complex sub-plots that weave in and out here, but basically it all ends up with John exiling himself. He goes off to live in an abandoned lighthouse, alone on the fringes of the World State. He overreacts somewhat to what he sees as the excesses and indulgences of that society, and starts whipping himself like that monk from The Da Vinci Code. Crowds gather to watch him, fascinated by “the self-flagellating savage”, until one day he thinks he sees Lenina in the crowd and he goes completely nuts. The story ends with a really haunting depiction of his suicide, alone in the lighthouse.

Lest you be mistaken, Huxley has A PointTM to make, and he goes in hard. He certainly doesn’t waffle on at all, and you can tell that every sentence is perfectly crafted to have maximum impact. In that regard, Brave New World reads more like a short story than a novel. This is a good thing in the sense that it makes the book a quick read. However, you do start to miss flowery descriptive moments and drawn-out passages, because they would give you a bit of time to process all of the information-dumps.

‘And that’, put in the Director sententiously, ‘that is the secret of happiness and virtue – liking what you’ve got to do. All conditioning aims at that: making people like their unescapable social destiny.’

This review might sound pretty PG, but the American Library Association actually ranks Brave New World on their list of the most challenged books of all time (don’t forget, Banned Books Week is coming up!). It has been censored, banned, and/or challenged dozens of times all around the world. The further I get into the Keeping Up With The Penguins project, the more I realise that the most-often banned books are always the ones that offer the best insights into our world.

Huxley later wrote two follow-ups: an essay (“Brave New World Revisited” in 1958), and his final novel (“Island” in 1962). I’m not sure I’ll bother seeking those out, but I’m glad I read Brave New World. By way of a recommendation, this one is probably best suited to sociology students, and/or naïve teenagers who need a bit of a wake-up call. It’s definitely less depressing than 1984, if that’s your concern – they still have sex, drugs, and rock’n’roll in the World State, after all 😉