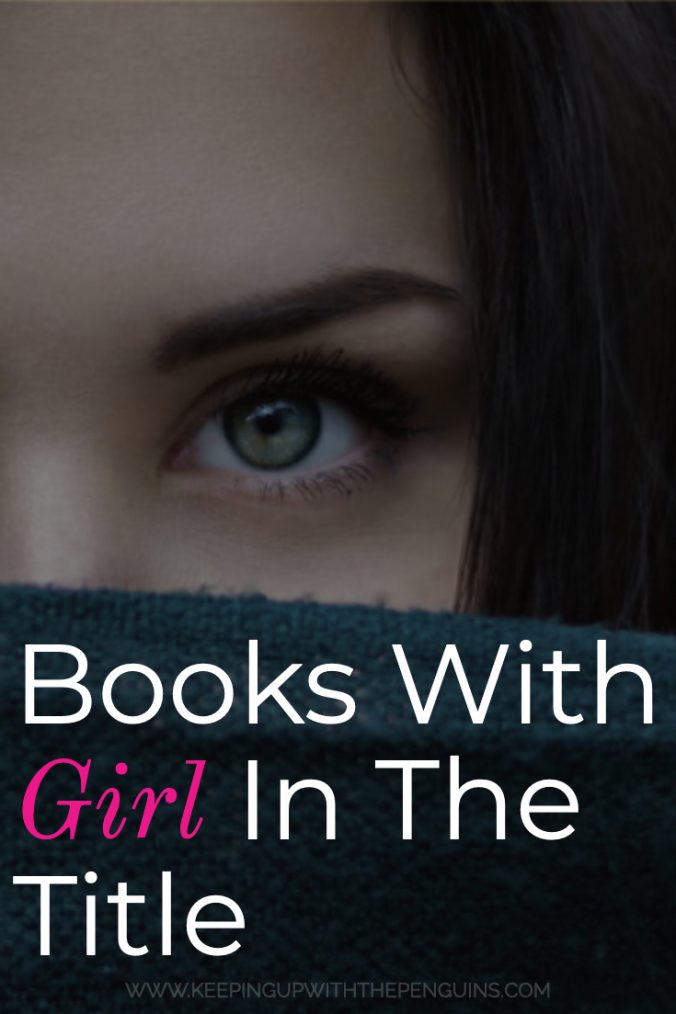 Books With Girl In The Title

There have been a lot of publishing trends since Gutenberg first put his press to work. We see them play out in real time now, thanks to the internet: there was the spate of Dan Brown rip-offs after the success of The Da Vinci Code, then Twilight heralded the age of the teen vampire love story… but there’s one in particular that really gets my goat. It’s books with “girl” in the title. Where the titular character is, in fact, a girl (defined as “a female child”), it’s not so bad, but when that descriptor is applied to grown woman, it feels reductive, infantilising, and all-around shitty. I took a look over my shelves and decided to implement a system: YAY (for when the title refers to an actual “girl”) and NAY (for when it should refer to a woman or person). Here are the results…

This is the first one that springs to mind for most people when you mention the “girl in the title” trend. Gone Girl was released in 2012 and fast became a must-read, spawning years of unreliable-female-narrator-psychological-thriller knock offs. The “girl” of the title is Amy, one of the protagonists, and she’s old enough to be married, pregnant, and caring for elderly in-laws. Read my full review of Gone Girl here.

The Girl On The Train by Paula Hawkins

And this is the second one that comes up when you mention books with girl in the title: The Girl On The Train by Paula Hawkins. It was released a few years after Gone Girl, and – rightly or wrongly – the two have been compared to death. The story revolves around three main characters, one of whom is “the girl on the train”. Rachel is in her mid-thirties, recently divorced, infertile, and an alcoholic. Read my full review of The Girl On The Train here.

Long before girls were gone or on trains, there was Girl, Interrupted by Susanna Kaysen. This is her memoir of her time spent in a psychiatric institution, having been admitted when she was 18 years old. The title references a Dutch painting called Girl Interrupted At Her Music. That, plus the fact that the title was a product of self-determination and a non-fiction account, swayed my verdict.

Alright, back to more recent history: Fangirl by Rainbow Rowell draws upon “fangirl culture”, specifically the creation of fan-fiction and the communities that develop around fandoms online. The titular character, Cath, is in her first year at university, struggling to adjust. This one is borderline (“young woman” would probably be most accurate), but Cath is very immature in her thinking and approach to life, and again the cultural reference sways it for me. Read my full review of Fangirl here.


City Of Girls by Elizabeth Gilbert

Last year saw the release of Elizabeth Gilbert’s long-awaited return to fiction, City Of Girls. The story is set in the 1940s, when 19 year old Vivian Morris has been kicked out of university and sent to live with her aunt in New York. There, she tumbles down the rabbit hole of glamour, sex, and adventure. I want to give Gilbert the benefit of the doubt – maybe she was trying to allude to the “showgirls” Vivian encounters – but ultimately, given the adult themes and growth of the main character, this one gets a womp-womp.

Also last year: Girl by Edna O’Brien. As far as books with girl in the title go, this one is the most straightforward. The story imagines the experience of one of the abductees of Boko Haram, in northeastern Nigeria. There are a few different ways in which this novel is problematic, but the title ain’t one of ’em. The titular character is most definitely a girl, and what happens to her is awful and traumatic and devastating. Read my full review of Girl here.

The Girls by Emma Cline

The Girls was Emma Cline’s debut novel, and it had a bold premise: a fictional story “inspired by” and very strongly reminiscent of the Manson family cult and the murders they committed. The “girls” of the title are the teenagers recruited to a ranch by their leader, Russell. The protagonist, Evie, was just 14 years old at the time; although the story is told as middle-aged Evie’s recollection, the primary action takes place when she was that age. Plus, this is a story about the fragility of innocence in girlhood, so for me, the title makes sense.

When you’re a YouTube superstar, and you have squillions of followers, you can call your book pretty much any damn thing you want, and people will still buy it. I’m still a bit baffled as to why Zoe Sugg went with Girl Online, though. The story centers around an adolescent girl with an anonymous blog, who goes unexpectedly viral when she unknowingly starts dating a pop-star. Girl Online is just such a terrible domain name! But, I’ll give this one to Sugg: the title is relevant, and accurately depicts the nature off her protagonist. Read my full review of Girl Online here.


The Van Apfel Girls Are Gone by Felicity McLean

The Van Apfel Girls Are Gone lands pretty much smack-bang in the middle of The Virgin Suicides and Picnic At Hanging Rock. The central character, Tikka, recounts the summer when she was eleven years old (and one sixth), when the three titular Van Apfel sisters vanish during a school concert. The search for the girls unites the community, but the mystery persists. At first, I was skeptical about the use of “girls” – surely “sisters” or just “the Van Apfels” would have worked just as well? – but by my own criteria, I think I’ve got to give this one the thumbs up, too.

I don’t know how much international Keeper Upperers know about Clementine Ford, but here in Australia she’s one of the most divisive feminist commentators we’ve got. It seems everyone has an opinion about her opinions, and scrolling through her mentions on Twitter is horrifying. Fight Like A Girl is her debut book, a feminist manifesto, a “call to arms”. This is one of the few instances of books that use girl in the title that I actually like and support, rather than just accept or outright hate. I feel like it was Ford’s way of using the language of the oppressor – the schoolyard taunt “you fight like a girl!” – and turning it on its head. Plus, her follow up was called Boys Will Be Boys, so she’s clearly even handed in her approach.

Well, in the end, it wasn’t as bad as I was expecting: more YAYs than NAYs on my shelves. That said, I’m familiar with a bunch of other books with girl in the title – The Girl With The Dragon Tattoo, The Other Boleyn Girl, Girl With A Pearl Earring – that I don’t happen to own, and remain skeptical about. Would you give them yays or nays? Am I the only one bugged by this? Let me know in the comments below…