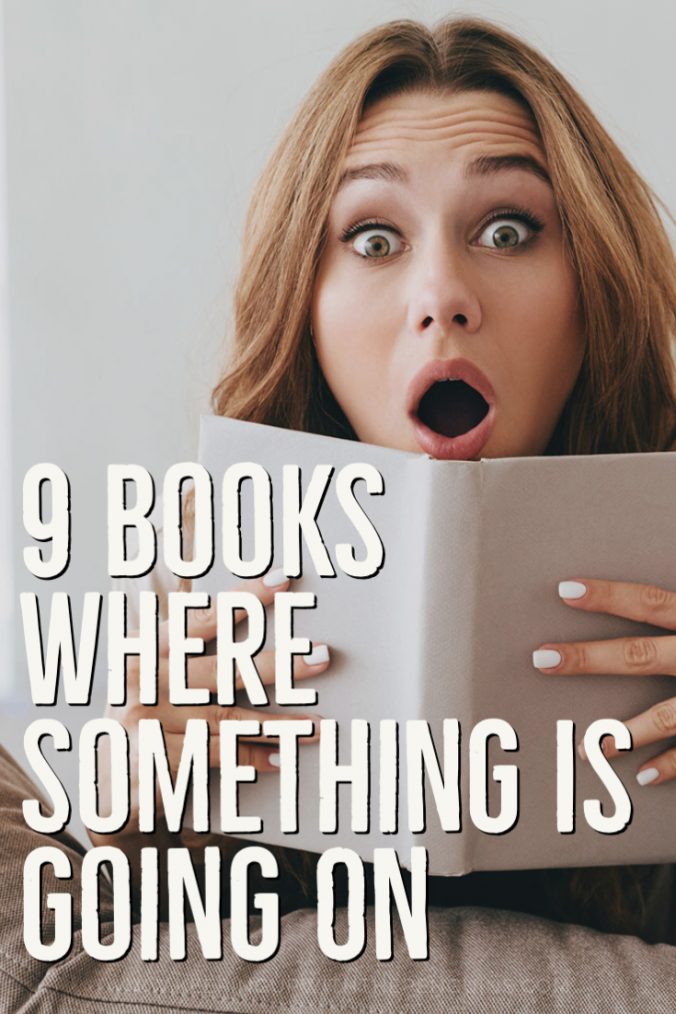 9 Books Where Something Is Going On

I’m not on TikTok (I’m a millennial, and I firmly believe in letting The Youth have their own apps – also I just don’t know how to use it). But when Kylie on Twitter shared this TikTok video from user @vanessaifediora, I watched it approximately a thousand times. It is hilarious, and brilliant, and now the only form of literary criticism that I care about.

To summarise (though I do highly recommend clicking through and watching it, and everything else @vanessaifediora has ever posted): @vanessaifediora has no interest in literary fiction nonsense about yearning and desire. She likes books where something is going on. Because she’s going to get to the bottom of it.

(And here’s what’s going on: I’m an affiliate, so if you buy a book through a link on this page, I’ll earn a small commission. Glad we got to the bottom of that!)

Tender Is The Flesh by Augustina Bazterrica

@vanessaifediora recommends this one in another video, and it’s easy to see why. Tender Is The Flesh is a prizewinning Argentinian dystopia (translated into English by Sarah Moses) about the power of language, the bounds of humanity, and a searing critique of our exploitation of the earth… and something is definitely going on. A virus has ripped through the entire animal population, wild and domestic, making all meat entirely poisonous to humans. Companies and governments conspire to legalise and legitimise the breeding and consumption of humans for food – or, in the post-Transition parlance, “heads” for “special meat”. Read my full review of Tender Is The Flesh here.

There’s all kinds of stuff going on in Toni Morrison’s Beloved. It begins in 1873, with Sethe – a formerly enslaved woman – and her daughter Denver living at 124 Bluestone Road, in Cincinnati, Ohio. And here’s what’s going on: the house is haunted by the memories and inherited trauma of Sethe’s past, which are personified in the ghost of the child she buried. The child was never formally named, but buried beneath a tombstone with the only phrase Sethe could remember from her Christian funeral: Beloved. That’s all well and good, until Beloved – an actual living, breathing being – shows up on the doorstep. Read my full review of Beloved here.

On the face of it, Rebecca might look like any other romance. A young lady meets a dashing, rich man on holiday, and marries him quick smart. But once she gets back to his house, the Manderley mansion, you realise: something is extremely going on here. Mrs Danvers, the Manderley housekeeper, remains steadfastly devoted to the first wife. That’d be the one that died a mysterious and untimely death in a boating accident the year before. Naturally, the truth has to come out, about what happened to Rebecca and why Maxim won’t so much as mention his first wife – we’re going to get to the bottom of it. Read my full review of Rebecca here.

Under The Dome by Stephen King

Alright, I suppose we could say that there is always something going on in a Stephen King book, but Under The Dome has so much going on. Captain Barbie is trying to get the hell out of town. Councilman James “Big Jim” Rennie is making a desperate grab for power. Journalist Julia Shumway is sticking her nose in everywhere it doesn’t belong. There’s a kid with migraines and a penchant for killing women who annoy him. Oh, and a giant clear dome has descended over the town and no one knows what it is, where it came from, how long it’s going to stay, or how to make it go away. Yeah, something is going on, and we need to get to the bottom of it! Read my full review of Under The Dome here.

We Are All Completely Beside Ourselves by Karen Joy Fowler

What the actual fuck is going on in We Are All Completely Beside Ourselves? It’s hard to say without completely ruining it for you; you’re going to want to get to the bottom of this one yourself. Rosemary is a deadpan student who keeps finding herself tangled up in stuff (like, getting arrested for something that wasn’t even her fault). Both of her older siblings are notably, mysteriously absent from her life. Her relationship with her parents really stinks. The only way to get to the bottom of what the fuck has been going on with this family is to read past page 70. Trust me on this. Read my full review of We Are All Completely Beside Ourselves.

The Animals In That Country by Laura Jean McKay

Something is definitely going on, because The Animals In That Country has an eerily prescient premise. There’s an outbreak of a highly infections subtype of influenza that threatens the very fabric of society. Conspiracy theories proliferate on Facebook, and the government releases a bunch of ads encouraging people to “keep calm and stay indoors”. I mean, that’s just SPOOKY, right? Well, get this: it turns out the infection gives people the ability to talk to animals. They can actually hear and understand animals telling them how shit life is in the zoo, so they release them. We’ve got to get to the bottom of that! Read my full review of The Animals In That Country here.

The Other Black Girl by Zakiya Dalila Harris

There is heaps going on in The Other Black Girl by debut writer Zakiya Dalila Harris. First off, twenty-something main character is the only black employee at her (fictional) workplace, Wagner Books – that’s realistic, but it really shouldn’t be. Then a second black girl is hired – yay! Only, around the same time, Nella starts receiving notes telling her to get the hell out of Wagner – what the fuck? And if that’s not enough to convince you that something is going on, and we need to get to the bottom of it, the notes are written in Comic Sans font. Can you believe that? Horrifying! Read my full review of The Other Black Girl here.

Piranesi is the pure definition of a book where something is going on! At first, it’s just a bloke who lives in a house. A really big house. And then he starts telling us about the other bloke who shows up a couple of times a week, who brings him stuff and asks him to do stuff. And then we realise we have no idea how he actually got into the house. Or where the house is. Or how big it is. I mean, it’s big enough to have its own weather systems, for crying out loud! Something is going on! And if you’ve got the guts to get to the bottom of it, it might just raise more questions than it answers. Read my full review of Piranesi here.

The Turn Of The Key by Ruth Ware

When the narrator of The Turn Of The Key turns up at her well-paying new job as a nanny for two very young girls, she has no idea how much is going on in the “smart house” she’ll be living in. It’s not just that every move she makes is watched by the vast in-house security surveillance system. It’s not just the bitter housekeeper, and the enigmatic (sexy!) groundskeeper. It’s that the kids are fucked up, deeply fucked up, and one of them is going to end up dead. The wrong person is going to cop the blame for it, too! What on earth is going on? We need to get to the bottom of it! Read my full review of The Turn Of The Key here.

Instructions For A Heatwave – Maggie O’Farrell