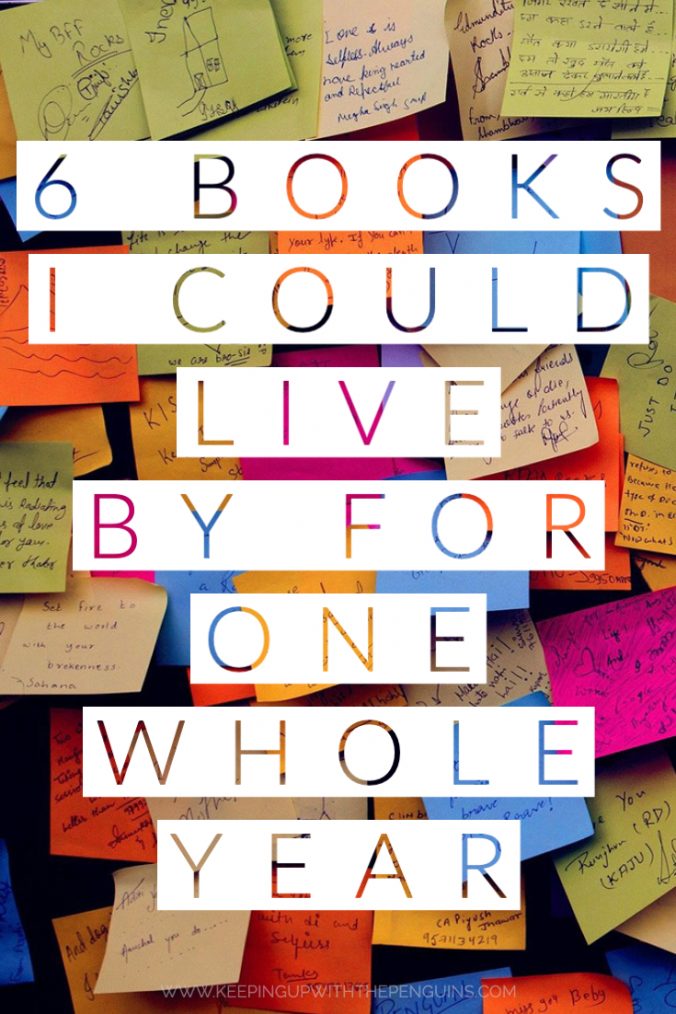 6 Books I’d Live By For A Year

There’s something intoxicating about the idea of committing to do something every single day for one whole year (in fact, I even considered it when I first started Keeping Up With The Penguins). There’s a whole lot of books out there by people who did just that. I read and reviewed Julie And Julia earlier this week, about Julie Powell’s project to cook every recipe from Julia Child’s Mastering The Art Of French Cooking, 524 recipes in 365 days. It got me to thinking about which books I could stomach living by for one whole year, which projects I could actually see through. Here’s my shortlist (but please note, this in no way constitutes a guarantee that I actually will do any of these, just that I could… y’know, if I wanted).

Scone With The Wind by Victoria Sponge

I’ll start with the project closest to this book’s origins: cooking. I’ve really no interest in mastering the art of French cooking (or Italian, or Japanese, come to that). I do, however, have an interest in books and puns. So, I think Scone With The Wind would be the perfect fit for me. Every recipe is a pun drawn from a great work of literature: Jane Eclaires, On The Rocky Road, Nineteen-Eighty Petit Fours… you get the drift. Of course, being coeliac, I wouldn’t be able to eat most of my creations – so it’d be a good idea to befriend me before I get started, eh?

The Happiness Project by Gretchen Rubin

Years ago, a friend sent me a copy of The Happiness Project. At the time, I flipped through it, and wrote it off as hippie nonsense. The older I get, though, the more I see the wisdom in Gretchen Rubin’s project, and appreciate the huge, vulnerable leap she took in sharing it with the world. I mean, at the end of the day, don’t we all want to be happy? To be more happy than we currently are, or at least to maintain our current level of happiness? And, if that’s the case, why aren’t we all undertaking our own happiness projects to make that happen?

Confession: I’ve had a copy of German For Dummies All-In-One on my shelf since… well, as long as I can remember. I always thought that German was a fascinating language, where even the most benign sentences sound fierce and powerful. And yet, I don’t think I’ve ever made it past the introduction of this guide for dummies – it literally could not be easier, and I still haven’t stuck with it. Of all the books I’d live by for a year, this is the one I most hope to get to someday. The science on the benefits of learning a second language is a lock but, more than anything, now I’m motivated by embarrassment that it’s taken me so damn long to get around to it.

The Life Changing Magic Of Tidying Up by Marie Kondo

I can hear your skeptical snorts from here, people! I know I gave more than a few myself when I heard about Marie Kondo’s book and Netflix series. But you know what? Working in a secondhand book-store has really opened my eyes. Every time sales of The Life Changing Magic Of Tidying Up go up, we get a flurry of new stock. People are really, really good at holding on to crap they don’t need, that could be doing more good elsewhere. I don’t exclude myself from that at all; in fact, I’m probably worse than most (given that I come from a long, long line of clutter bunnies – I think it might be genetic). If anyone can show me the way, it’ll be Marie Kondo. (I draw the line at her whole no-more-than-30-books-at-a-time thing, though I gave it a hypothetical go.)

To be honest, I don’t know shit about art. I’ve seen some, here and there, but generally speaking it’s a bit of a blind spot for me. The only artworks I could reasonably-consistently identify are Banksy’s, but I’ve never even seen one in the flesh. In a parallel world, where there are no global pandemics or travel restrictions or financial woes, I could follow the path laid out in Where’s Banksy?, and travel around the world to see his most important works up close. That project would take me to London, Los Angeles, Mali, and Melbourne – by the time the year was through, I’d have a full passport, and maybe a deeper understanding of art and protest.

1,000 Books To Read Before You Die by James Mustich

I’d have to be a true masochist to take this on… wouldn’t I? I mean, I’ve already bumbled my way through 150-odd books for this blog, surely that’s good enough? But, I must admit, I’m tempted…

Which books do you think you could live by for a whole year? Let me know in the comments!