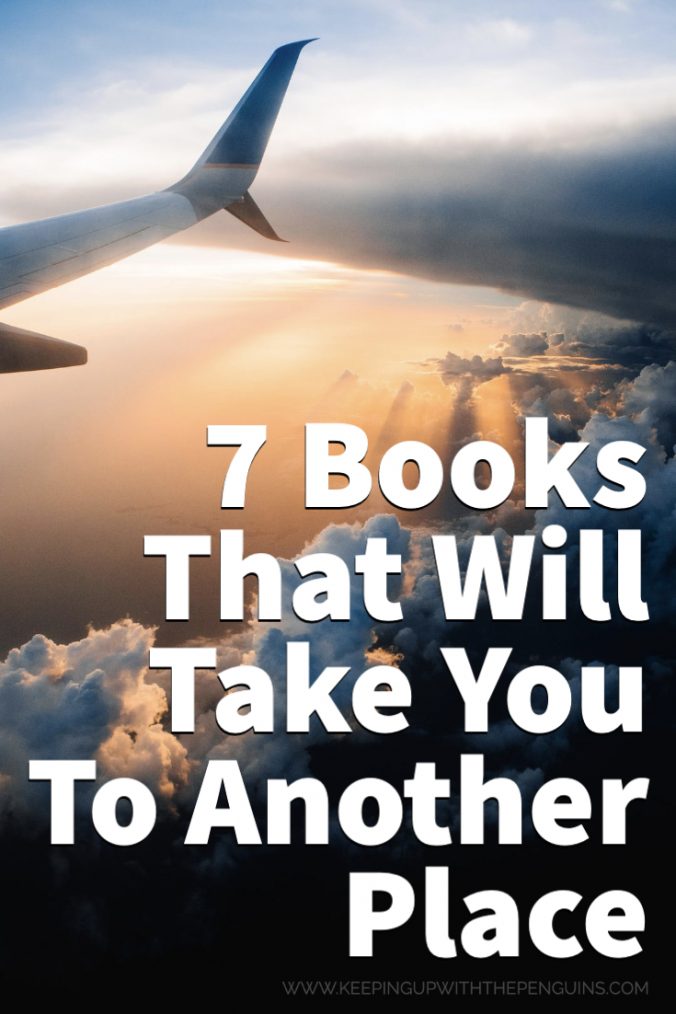 7 Books That Will Take You To Another Place

If you’re anything like me, you haven’t had the chance to get out much lately. Whether you’re in official lockdown, or just staying home because it’s the right thing to do, you’re probably getting sick of staring at your own four walls. Luckily, booklovers have a magic power: we can escape to anywhere we want, at any time, as long as the right book is within reach! To stop you going stir crazy, I’ve put together this list of books that will take you to another place…

Naples is one of the oldest continuously-inhabited urban settlements in the world. It’s got a whole lotta history to get the buffs excited: a UNESCO World Heritage site in its city center, the Roman ruins of Pompeii, and Vesuvius just up the road… but, let’s be real, most of us are really thinking about the food. Naples’ pizza is world famous, and they have more Michelin starred restaurants than anywhere else on the planet. The Naples of Elena Ferrante’s My Brilliant Friend is a lot grittier than the one we day-dream about (violence, poverty, and oppression are rife), but her writing is powerful enough to sweep you up in the story and make you feel as though you’re really there, anyway. Read my full review of My Brilliant Friend here.

The Pacific Crest Trail is a 4,720km hiking route along the West Coast of the United States. It covers mountains, national forests and parks, scooting around areas of civilisation and modern conveniences (like roads and toilets). Hiking the whole thing is – obviously – a huge undertaking, usually requiring months or years of preparation. Cheryl Strayed, in the wake of her mother’s death and recovering from heroin addiction, decided to give it a go on a lark. She didn’t set out to do the whole thing (she’s not that crazy), but she still managed nearly 1,800km on her own, with very little preparation or assistance. She immortalised her journey in her memoir, Wild, which went on to top international best-seller lists and make the PCT a go-to destination for hikers in search of solace and revelation. Read my full review of Wild here.

Dublin – “The Fair City” – is the capital of Ireland and ranked by the Globalization and World Cities Network as one of the top thirty cities in the world. You’d think it might’ve changed a lot since James Joyce wrote Ulysses, depicting a day in the life of fictional Dubliner Stephen Bloom, but given the number of Joyce/Bloom tours that still operate in the city, it would seem that a lot remains the same. You can visit the pubs Bloom drank at, sites where Joyce is known to have lived and worked, and even have a gander at statues erected in their honour. That is, if you’re not too busy enjoying the rest of what Dublin has to offer… Read my full review of Ulysses here.

My Sister, The Serial Killer by Oyinkan Braithwaite (Lagos)

Lagos is the most populous city of Nigeria – in fact, of the entire African continent – and it’s one of the fastest-growing cities in the world. It’s a booming economical and financial hub, with the flood of new money bringing ultramodern sky-rises and developments, but it’s also the center of art and culture in the region. “Nollywood” (the Nigerian film industry) produces about 1,000 films per year, outstripping Hollywood by a considerable margin. After the movies, you can check out the city’s famed nightlife and live music scene. The hustle and bustle, the colours and lights, jump off the page of My Sister, The Serial Killer. It’s a unique glimpse into a part of the world too often inaccessible to Anglophone readers. Read my full review of My Sister, The Serial Killer here.

My Year Of Rest And Relaxation by Ottessa Moshfegh (New York)

C’mon, do I really need to explain to you why you might want to visit New York? Fictional depictions of the Big Apple abound, in every form (film, television, books, music, musicals…), so you’re spoiled for choice if that’s what you’re after. I find the depiction in Ottessa Moshfegh’s My Year Of Rest And Relaxation particularly interesting, though, because it covers a unique time in New York’s history: the year leading up to the September 11 attacks. The (relatively) carefree innocence of the city’s inhabitants is oddly foreboding, the dramatic irony being that the reader knows what’s coming. Seeing as time travel isn’t yet possible (nor any other kind of travel at the moment… ahem!), give this one a try if you’re so inclined.

Tokyo is the capital of Japan, the political and economic center of the country, the seat of the Emperor, and the most populous metropolitan area in the world (with about 37 million inhabitants). I must say though, what I find most alluring about it as a destination isn’t the “attractions”, the history, or the other stuff that we tourists normally gawk at: it’s the idiosyncratic features of modern life in Tokyo that fascinate me. And there’s no better view of them than that offered by Sayaka Murata in Convenience Store Woman. This slim little novel taught me more about Tokyo and urban Japanese culture than anything else I’ve ever read. Read my full review of Convenience Store Woman here.

Look, normally I would prefer books about places to be written by native inhabitants of those places (see… pretty much all of the above). However, I make an exception for Paris. The city of love manages to be both alluring and hostile to outsiders at the same time, which makes it uniquely fun and funny to read about from an outsider’s perspective. That’s what you get in Paris Match (and in Me Talk Pretty One Day, and in pretty much every other American-man-abroad account I’ve read of living in France). John Von Sothen has been living with his Parisian wife and children in the city for nearly two decades, so he’s seen it from both sides now, and his insights are both hilarious and helpful for us would-be Francophiles. Read my full review of Paris Match here.

Whew! That was quite a trip around the world, wasn’t it? And without having to check baggage or try to snooze off the jet-lag in a busy airport! Where have you (fictionally) “been” lately? Tell me the comments!