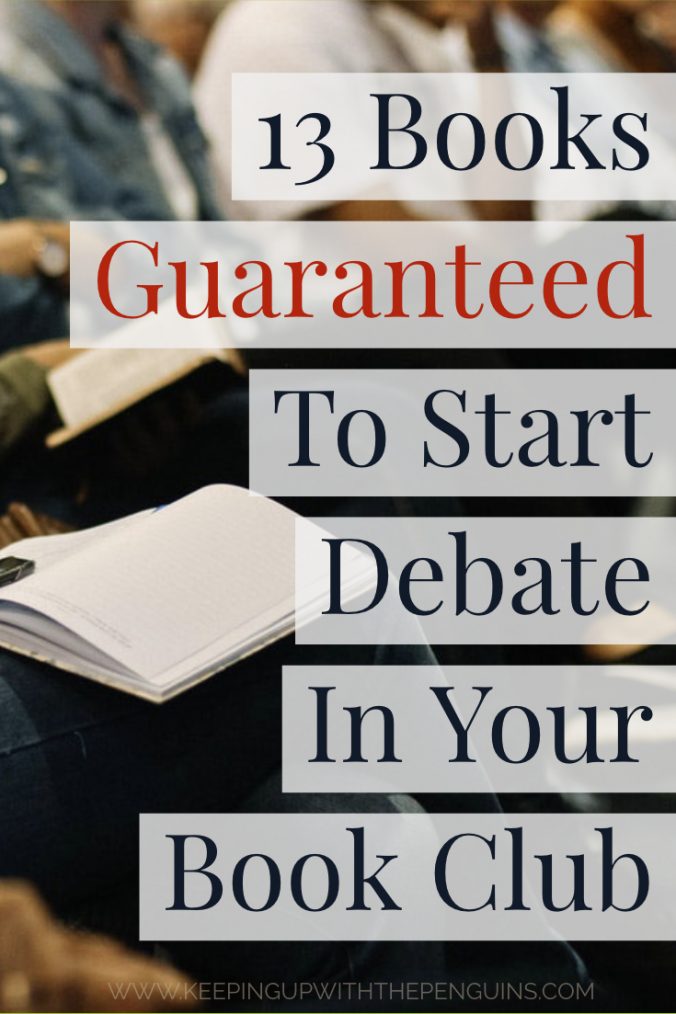 Nothing is more dreary than a book club where everyone agrees all the time. I mean, you don’t want punches thrown or anything, but a good-spirited lively debate is the dream. And for that kind of conversation, you need to pick the right kind of book. It’s not about having everyone like it, it’s about everyone having something to say about it, one way or the other. Choosing a controversial book not only livens up the night, but it forces everyone to actually read the damn thing (I’m looking at you, Susan!). If they haven’t, and they try to contribute to the conversation, it will become abundantly obvious very quickly, and they’ll be shamed into better book club behaviour in the future. Here are my suggestions to get the ball rolling: 13 books that will start debate in your book club.

This is the classic Pandora’s box story. In The Husband’s Secret, a woman finds an envelope written in her husband’s hand, that says she is only to open it in the event of his death… but he’s still alive. Would you open it, or would you let him keep his secrets? And, if you reached for the letter-opener, what would you do with its contents? You’ll be surprised how much you learn about your fellow book club members when you put these questions to them… Read my full review here.

We Need To Talk About Kevin – Lionel Shriver

Everyone will agree that something has gone terribly wrong in Eva’s family, but that’s probably where the consensus about We Need To Talk About Kevin will end. Is Eva a bad mother? Is Kevin a bad kid? Where do we draw the line between nature and nurture? Can one fix the other? It’s a confronting story, but it’s one that’s sure to get people talking.

We Are All Completely Beside Ourselves – Karen Joy Fowler

Now, I’m famously hesitant to say too much about We Are All Completely Beside Ourselves, because I can’t bear the thought of spoiling the plot twist for the uninitiated. So, the first (safe) question I would ask is this: who saw it coming? (And I’m very sure anyone who says they did is lying!) Follow up: was it a good twist, or a bad one? And there are plenty of other questions raised by this Man Booker nominee, but to find them you’ll have to read it for yourself… 😉 Read my full review here.

Make sure you stock up on tissues! Sophie’s Choice is a heart-breaking, gut-wrenching read, guaranteed to elicit some strong feelings from even the stoniest-hearted members of your book club. Even though the title only offers the singular, in reality Sophie makes a number of choices along the way, which means you can ask the same question a dozen times and get different answers: would you have made the same choice?

The Age Of Innocence – Edith Wharton

The Age Of Innocence is a very subtle novel, and many people give up on it. For those who persist, however, it raises a lot of interesting questions about the roles of women, even in today’s society. Are you Team May Welland, or Team Countess Olenska? How has our perception of their behaviour changed since the book was first published? Read my full review here.

Honourable Mention: A lot of these same questions could be asked of Gentlemen Prefer Blondes. It’s a quicker read, and much more light-hearted, if your book club is more inclined to those choices. Read my full review here.

Speaking of gender roles… this is an evocative title to suggest for mixed company, so unless you’ve assembled an entirely woke and left-leaning book club, prepare for fireworks! In Men Explain Things To Me, Solnit explores through a series of comic essays the ways in which men and women speak to one another. It’s sure to elicit some amazing anecdotes from the other attendees, if nothing else!

A Game Of Thrones is a longer book club would normally need, but (almost) everyone is already familiar with the story thanks to the hugely successful HBO adaptation, which makes it a much quicker read than other lengthy tomes. And there’s your first grenade: try asking whether anyone thinks the book is better than the show! If that doesn’t get things started (fat chance), ask: who deserves the Iron Throne?  And let the games begin! Read my full review here.

Little Fires Everywhere is a book with no minor characters. Everyone has a unique viewpoint, and all of them are a shade of grey. That means that everyone in your book club will relate to them differently, and will be able to mount a legitimate case for their preferred narrative. Who chose right, and who chose wrong? You’ll stay up all night hashing it out!

This one is not for the faint of heart If members of your book club shy away from profanity, or smut, or even just crude comedy, they’re going to have a lot of strong opinions about Portnoy’s Complaint! But that’s the idea, remember? Enjoy debating the relative merits of Roth’s particular brand of comedy. Read my full review here.

The Immortalists raises many interesting questions, but surely the most pressing (and the most interesting for your book club) is this: would you want to know the date of your own death? And, if you did, how would you choose to live? In Chloe Benjamin’s beautiful novel, four adolescents are faced with that very question, and each of them handle it very differently. Are you inclined to search for love? Security? Longevity? Everyone in your book club will have a different answer – that’s the fun!

To Kill A Mockingbird – Harper Lee

Try taking everyone back to the books you read in high-school. It gives you the chance to ask the attendees questions like whether they like it more or less than they did back then. And do the first-timers feel differently to the re-readers? And even above and beyond the nostalgic elements, To Kill A Mockingbird ticks a lot of debate-starter boxes: social justice, race in America, you name it. Does it hold up? Or has it aged past relevance? And, if nothing else, the themed cocktails practically mix themselves. Read my full review here.

Technically, this is a young adult novel, so that alone might make it a somewhat controversial choice for an adult book club. Make sure everyone holds fire on their opinions until they’ve read it, though – The Power could change a few hearts and mind. In this incredible book, women gain an incredible physical power that gives them, for the first time in history, a physical, political, and social advantage. How would that change the world? Is it for the better, or worse? Debate and decide for yourselves 😉

The Turn Of The Screw – Henry James

Let’s end on a fun note: a ghost story! The Turn Of The Screw is the perfect choice around Halloween. It’s short, but meaty, and it leaves just enough of a mystery dangling to start debate in your book club. Are ghosts real? Or is the governess who sees them just… crazy? What’s been lost in the translation of a story within a story? And why the heck was Henry James so wordy?? Read my full review here.

Bonus points: You could pair this one with the contemporary adaptation The Turn Of The Key, by Ruth Ware.

That should be enough to keep your book club meetings lively for the next year or so: my work here is done! What book has sparked debate in your book club? Add it to the list in the comments (or over at KUWTP on Facebook!).

An Artist Of The Floating World – Kazuo Ishiguro