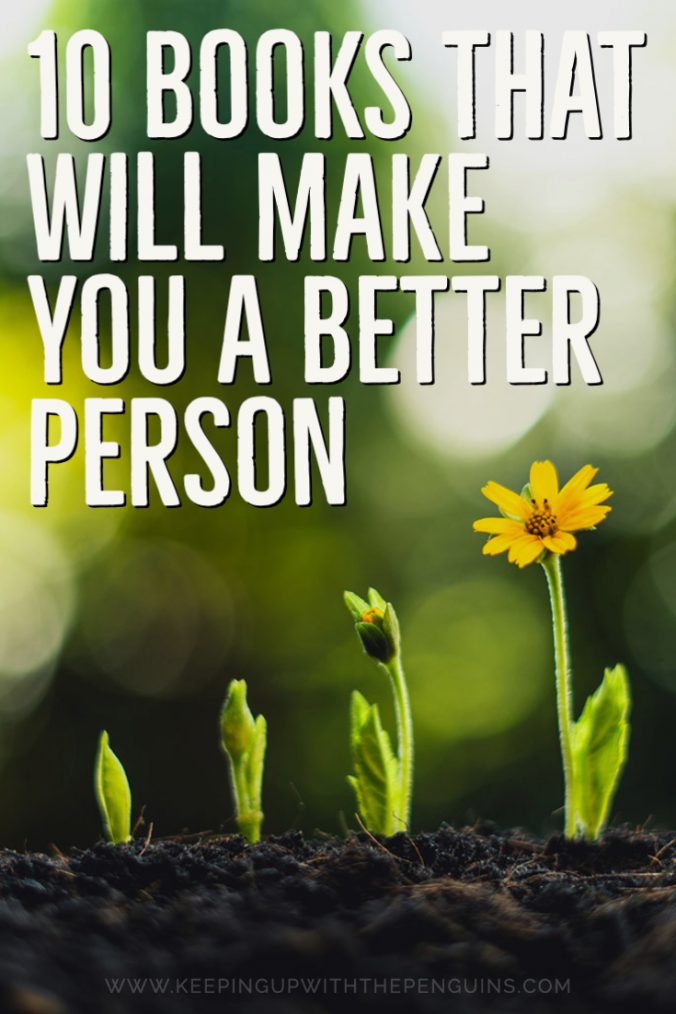 In Order To Live is Yeonmi Park’s account of how she escaped North Korea and forged a life for herself far away from everything she had ever known. That’s inspirational and eye-opening on its own, but it’s her final message in the Acknowledgements that could make you a better person. She says: “caring is how we begin to change the world”. Caring about the thousands (tens of thousands? we’ll never know for sure) who have died in their bids for freedom from the North Korean dictatorship is the first step in ensuring that no one else has to suffer in order to live. And then, caring about how many people don’t have access to health care. And then, caring about how many live below the poverty line. And then… Read my full review of In Order To Live here.

The Hate U Give by Angie Thomas

Have you ever found yourself thinking “they ought to…” about victims of crime? People being abused in their relationships “ought to” leave? Victims of scams “ought to” report? Witnesses to police violence “ought to” speak up? The Hate U Give, a young adult novel by Angie Thomas, might make you rethink what it means to come forward with your story. The main character, Starr Carter, is a Black teenage girl who witnesses a horrific crime at the hands of the police. As she says herself: “I’ve tweeted RIP hashtags, reblogged pictures on Tumblr, and signed every petition out there. I always said that if I saw it happen to somebody, I would have the loudest voice, making sure the world knew what went down. Now I am that person, and I’m too afraid to speak.” Read my full review of The Hate U Give here.

Okay, I understand if you’re skeptical, seeing an Australian political thriller on a list of books that will make you a better person. Honestly, though, Bruny might be the one that had the most impact on me of all. It’s all for one line, part of Ace Coleman’s backstory, where her father would ask her family every night over the dinner table: “Who did you help today?”. For some reason, that really stuck in my head. I find myself wondering more nights than not, “Who did I help today?”. If the answer is lacking, I feel compelled to do better tomorrow. Maybe you don’t need to read the whole book to benefit from this idea, but why not give it a go anyway? Read my full review of Bruny here.

If you struggle with self-criticism in the vein of not being a “good enough” feminist (or anti-racist, or ally, or advocate), then Bad Feminist is a no-brainer. This is one of the books that will make you a better person in the sense that it will help you forgive yourself for not being the best person (yet). Roxane Gay opens the essay collection by laying the truth bare: it’s better to be a “bad feminist” than not to be a feminist at all. She is willing to concede her own vulnerabilities, her oversights, and make peace with the fact that she may be wrong or “bad” at upholding her values. It’s not an excuse to stop trying; she’s trying and learning and growing all the time – as are we all. Read my full review of Bad Feminist here.

Alright, yes, as far as books that will make you a better person go, Eat, Pray, Love seems like a bit of a cliche. A privileged white woman takes a huge book advance and uses it to travel the world for a year and “find herself”? What could anyone learn from that? Well, as with most books and authors, there’s more to Liz Gilbert and her memoir when you scratch the surface. The particular wisdom of Eat, Pray, Love that’s stuck with me is how Gilbert overcame her difficulties with prayer at the ashram she visited in India. She began devoting her daily prayer, the one she’d do anything to avoid, to someone she loved. Reframing a dreaded task as an act of devotion is a pretty cool idea, and it’s something I’ve since done with great success myself. Give it a go before you judge!

Hard conversations seem to have become even harder these past few years. As the world’s become scarier and the threats to our health and wellbeing more imminent, those conversations – while difficult to have – have become essential. Good Talk is a graphic novel, a memoir, that will help you have them better. For Mira Jacob, it all began with her son’s innocent line of questioning about Michael Jackson’s appearance and race. This led her to think about – and draw about – a whole bunch of good, but hard, talks she’s had to have throughout her life. Mostly, she focuses on issues of race and colourism, but there are other tough topics to tackle too. Read my full review of Good Talk here.

So You’ve Been Publicly Shamed by Jon Ronson

On 3 January 2019, @maplecocaine Tweeted: “Each day on twitter there is one main character. The goal is to never be it”. It’s pithy, but it’s true. From Bean Dad, to the Book Murderer, to Shrimp In Cinnamon Toast Crunch, it seems like the daily Twitter pile-on could strike any of us at any time, with apparently no notice. Jon Ronson, like all good journalist/authors, tracked this phenomenon with interest – but he also took it one step further and started looking what happened to Twitter’s main characters after the storm had passed. The most iconic is, of course, Justine (back in the early days of Twitter, her poor-taste joke about AIDS in Africa caught worldwide attention), also the subject of Ronson’s TED Talk. This book will make you a better person, if only because it will make you think twice before quote-tweeting.

The Immortal Life Of Henrietta Lacks by Rebecca Skloot

When you last had a headache, did you reach for the Advil? Or an antacid when your belly was burning? A contraceptive pill when your daily reminder went off? How many times a day do we reach for medical interventions without really thinking about where they came from, and the sacrifices of those upon whom they were tested? That’s one of the (many) reasons that The Immortal Life Of Henrietta Lacks is one of the books that will make you a better person. It will open your eyes to the harsh realities of 20th century medical advancements, and how often the most vulnerable people in our community have been exploited so that we might benefit from better health. It’s both a lesson in gratitude, and a reminder to prioritise ethical decision-making. Read my full review of The Immortal Life Of Henrietta Lacks here.

She Come By It Natural by Sarah Smarsh

Put simply, the world would be a better place if we were all a bit more like Dolly Parton. Instead of using her millions to launch into space while her employees pee in bottles, she has donated over 133 million books to children through her Imagination Library and created thousands of jobs (with incredible benefits) in her home state. You can learn more about our blonde country guardian angel, a true testament to the best of humanity, in She Come By It Natural. From Dolly’s hard-knock Tennessee roots to packed stadium shows and unrivaled cultural cut-through, this book will inspire you to be a better person – someone Dolly would be proud of. Read my full review of She Come By It Natural here.