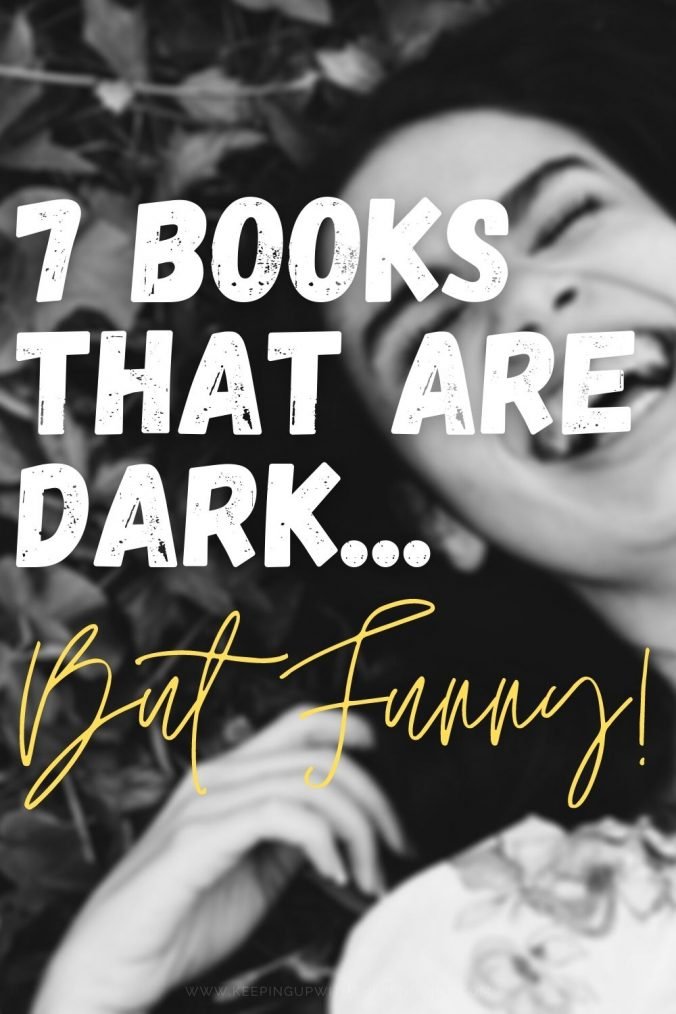 7 Books That Are Dark But Funny

I’ve learned something new about myself lately: apparently, my sense of humour is pretty dark. This came up because I recommended a few books to people in need of a laugh (aren’t we all?), and they came back to me horrified. “How could you find that funny?” they said, “it’s so dark!”. Defensively, I opened my little blog here to put together a list of books that are dark but funny, for twisted little freaks like me.

I guess the problem with a list like this is that “dark” and “funny” are both subjective. What strikes me as incredibly bleak but simultaneously hilarious might seem like a boring waste of paper to you. Them’s the breaks. Still, I figure my sense of humour and insensitivity to pathos is just about as finely honed as the next reader’s, so chances are at least one of these will hit the mark.

The Speechwriter by Martin McKenzie Murray

After the past few years, you’d be forgiven for thinking political satire is dead. The Speechwriter proves it isn’t so. Martin McKenzie-Murray’s skewering of Australian bureaucracy and political lethargy is one of the funniest books I’ve read in years. The absurdity is unshakably familiar, but dialed up to eleven. The tone is endearingly nihilistic: the fed-up straight man to the world’s clown car. The Speechwriter had me snort-laughing on almost every single page. Sure, Toby’s life in prison is a bit miserable: a homicidal cell mate who insists on editing his memoir, Australia’s worst criminals forcing him under threat of violence to ghost write their letters, and sentient PlayStations destroying the outside world… but it’s just so FUNNY! Read my full review of The Speechwriter here.

Rabbits For Food by Binnie Kirshenbaum

Rabbits For Food was one of my absolute-best reads of 2020; I must have recommended it to just about everyone I’ve encountered since I turned the final page. The main character, Bunny, finds herself institutionalised after a psychotic episode in a swanky New York restaurant. (By the way, she’s so bored with people asking why her parents named her Bunny, she’s started telling them it’s because they bred rabbits for food, thus the title – LOL!). This is the main culprit of friends coming back to me to complain that my “hilarious” book recommendation actually drove them to drink… but I maintain that it’s worth it. Read my full review of Rabbits For Food here.

A Russian classic about a literal axe murderer: what could be funnier than that? Fine, I’ll concede that Crime And Punishment is probably not the first book that comes to mind when someone asks for comedy. Maybe that’s why it tickled me so: the element of surprise! The thing is, Raskolnikov – the protagonist, and aforementioned axe murderer – is so hopelessly neurotic, so tangled in his own thoughts, that his very real despair had me howling with laughter. The scariest part is that it made him so relatable! Who among us hasn’t done something stupid, without thinking it all the way through, then tortured ourselves afterwards with all the coulda-woulda-shouldas? Anyone? Read my full review of Crime And Punishment here.

My Sister The Serial Killer by Oyinkan Braithwaite

My Sister The Serial Killer gives you exactly what it says on the tin: the story of Korede and her sister, Ayoola, who has the unfortunate habit of killing her boyfriends. Braithwaite thus cleverly mixes crime, romance, and family saga. It’s definitely not a thriller, in the sense that it focuses far more on the sisters’ relationship – and what happens to it under strain – than it does any cat-and-mouse games with detectives. It was a pleasure to spend time with such complex and intriguing characters in such a devious and satisfying story. Read my full review of My Sister The Serial Killer here.

How could anyone with a dark sense of humour resist a title like that? Super Sad True Love Story is the third novel from the pen of Soviet-born American master of satire Gary Shteyngart, and he did not disappoint his legion fans. In a near future (that feels alarmingly close to our own), America is buckling under the weight of economic ruin. One Lenny Abramov, an immigrant janitor’s son and ardent booklover (or, as he would put it, a fan of “printed, bound media artifacts”) falls in love with Eunice Park. Can love bloom from the ashes?

The Sellout by Paul Beatty

Paul Beatty’s The Sellout “showcases a comic genius at the top of his game”, according to the blurb. Writing comedy about race and class takes guts and a deft touch, and Beatty has both in spades. A disaffected black man, grieving his late father (and upon discovering that the man’s long-promised much-fabled memoir doesn’t actually exist), takes charge of destiny – his and his country’s – by… taking a case to the Supreme Court that would reinstate slavery and segregation. It’s outrageous, it’s bold, and it works!

Thank You For Smoking by Christopher Buckley

There are very few people we can all agree are the Bad Guys. Surely, the purveyors and promoters of cigarettes are on that list. But what if there was a book about the face of Big Tobacco? Meet Nick Naylor, the star of Thank You For Smoking. He is the chief spokesperson for the ironically-named Institute Of Tobacco Studies, and he’s so good at his job that his boss hates him, the FBI suspects him, the anti-tobacco terrorists want to kill him, and the media are all up in his business. This is a hilarious romp through Washington politics, Hollywood ostentation, and what someone will do to pay the mortgage. Read my full review of Thank You For Smoking here.

Looking for more book recommendations? Check out my round-up of recommended reads.

Thank You For Smoking – Christopher Buckley