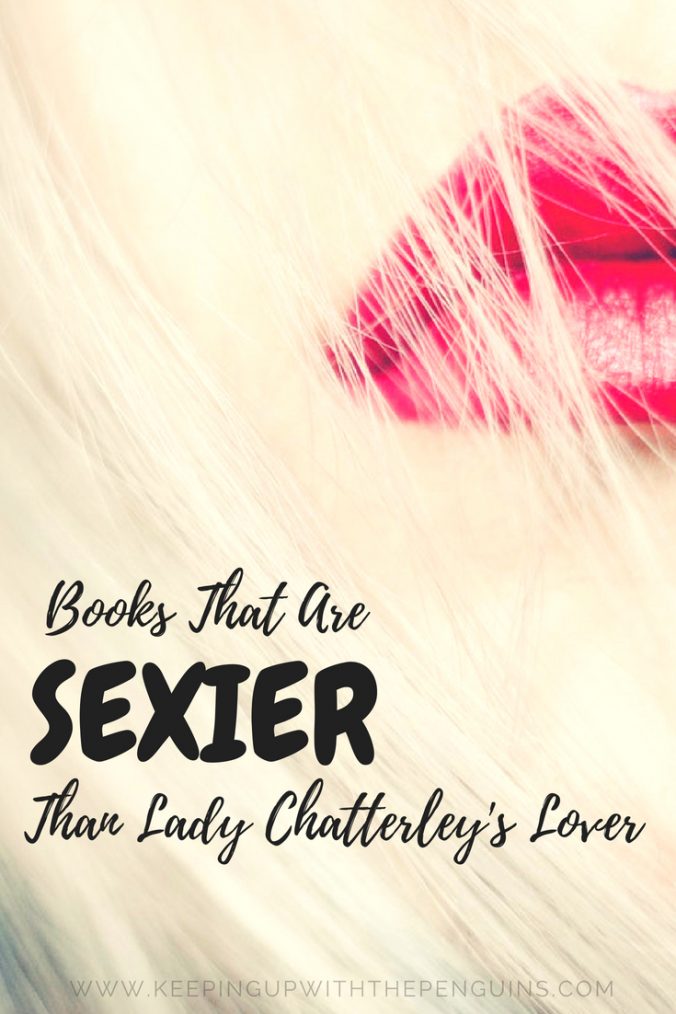 6 Books That Are Sexier than Lady Chatterley’s Lover

Earlier this week, I reviewed Lady Chatterley’s Lover. I was (very) disappointed to report that it wasn’t anywhere near as dirty as promised. As I’ve said before, I’m a huge fan of literary smut. I think its poor reputation is a travesty, and I’ve never understood why books about violence are held in such high regard while books about sexuality are relegated to the status of gutter trash. I have way more fun tallying up how many euphemisms an author can find for “penis” and “vagina” than I do reading about angry white men shooting each other with big guns.

So, rather than rehashing the disappointments of Lady C, I want to celebrate literary smut by giving you some decent alternatives: here’s a list of books that are sexier than Lady Chatterley’s Lover (and who knows, you might pick up some sexting tips to impress your next conquest).

The Bride Stripped Bare was one of the first dirty books that I ever got my hands on. I borrowed it from a friend, and read it in shameful secret. It was originally published anonymously in 2003, but Australian author Nikki Gemmell was quickly outed as the lady behind it. It was actually the best-selling book by an Australian author that year. The story is told as the diary of a young wife, sexually frustrated by the boredom of marital obligation. She takes on a secret life, full of fellatio and other frisky exploits, including one particularly torrid hotel-room encounter with a group of taxi drivers. This one’s great for beginners, but aimed squarely at the ladies.

Fanny Hill: or Memoirs of a Woman of Pleasure by John Cleland

If you were looking for Fifty Shades of Grey on this list, give up now. Think of this book as the gorgeous, intelligent, successful and all-round superior cousin of E.L. James’ bestselling novel. The erotic Story of O was published in 1954 under the pen name Pauline Réage; the true author (Anne Desclos) did not reveal herself as such for over 40 years, so you know the book must be good. She later claimed she wrote it as a series of love letters to her lover Jean Paulhan. It is the tale of a Parisian woman (named, funnily enough, O) who explores her submissive tendencies by making herself constantly and completely sexually available for any man who belongs to the same secret society as her lover. There’s blindfolds, chains, whips, piercings, the works! Not for the faint of heart…

Delta of Venus by Anaïs Nin

Ah, Anaïs, the darling of sex-positive feminists everywhere! Delta Of Venus is a collection of fifteen short stories that was only published (posthumously) in 1977, but it was originally conceived in the 1940s as a collection of erotica commissioned by a private collector. Yes, a wealthy man actually paid her to write smut for his own personal use. Even though he gave Anaïs strict instructions to focus on the filth and cut out all the poetic nonsense, she still managed to write with a literary flourish that maintains its beauty and relevance some eight decades later. This one is for the women who want to enjoy sex and rule the world. Read my full review of Delta Of Venus here.

Tropic of Cancer by Henry Miller

Tropic of Cancer appears on every single list of literary books with dirty bits, and with good reason. Ostensibly, it’s a novel based on Miller’s own life as a struggling writer, but it is famous (or infamous?) for its many graphic passages that explicitly describe his sexual encounters and fantasies. In fact, the obscenity trials triggered by the publication of Tropic of Cancer in the U.S. challenged American pornography laws in such a way that it can be credited with at least partial responsibility for the freedom of speech they now enjoy. Reading Tropic of Cancer isn’t just titillating, it’s a political act! 😉

Some of the language is pretty full-on, and there’s serious homophobia, so reader beware if you’re looking to protect your delicate sensibilities. Still, Miller was famously the lover of the aforementioned darling Anaïs Nin, so he can’t have been all bad, eh? Read my full review of Tropic of Cancer here.

And, finally, this list of sexy books wouldn’t be complete without an honourable mention to Dangerous Liasons (or Les Liaisons dangereuses, in the original French): the filth that launched a thousand homages. It is the story of two staunch rivals, former lovers, who weaponise their sexuality and seduce their acquaintances in order to gain social control. They revel in their exploitation of others, they take glee in their cruelty, and they boast endlessly about their respective talents. It’s sex and power, all day every day, and we can see the influence of de Laclos’s work in all manner of contemporary pop culture.

And there you have it: a bunch of books sexier than Lady Chatterley’s Lover, all of which are guaranteed to make you blush (at least a little). Will you admit to your favourite literary smut? Go on, tell me in the comments below (or, if you’re really brave, leave a comment at KUWTP on Facebook!).