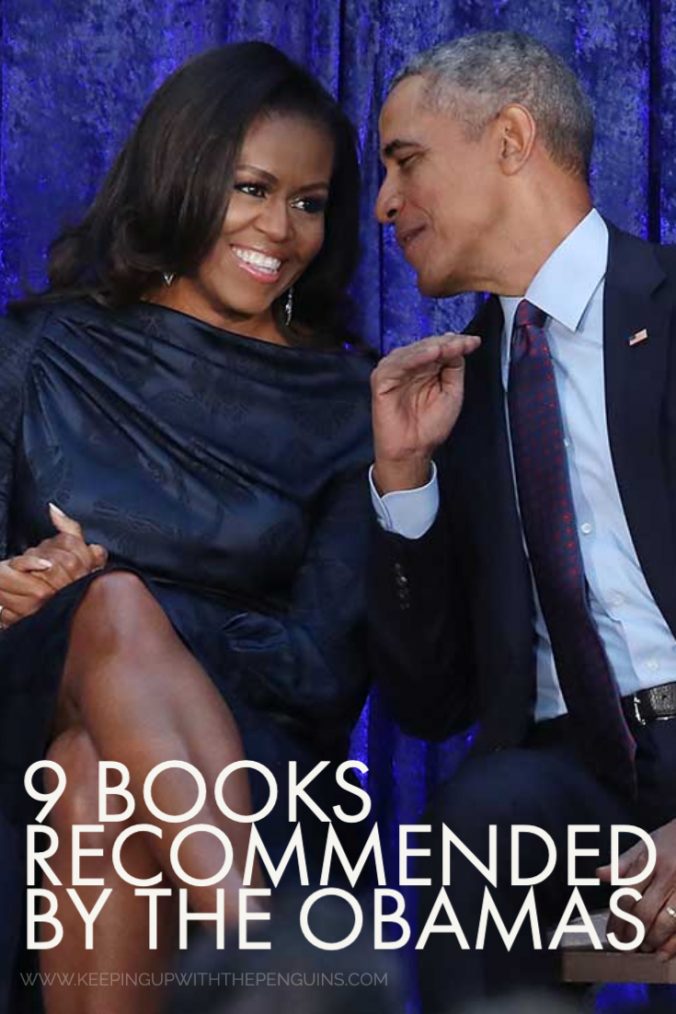 Every celebrity and his dog has a book club now, but there are a few specific individuals who can pretty much guarantee best-seller status for their recommended reads. The first that springs to mind is Oprah (duh), and the second is Barack Obama. Every year he releases a list of books he’s enjoyed, and every year the named authors watch their book sales soar. What you might not know is that Michelle Obama has recommended a few cracking reads in her time, too. Here’s a list of nine books recommended by the Obamas (one or both of them)…

Girl, Woman, Other by Bernadine Evaristo

Girl, Woman, Other has been blessed a few times over when it comes to making the news. First, Evaristo wound up sharing the Booker Prize award with Margaret Atwood for The Testaments because the judges – very controversially – “couldn’t choose” between them. Then, not long after, the best-seller was included in Barack Obama’s list of books that made 2019 “a little brighter”. That’s enough to cement it into our bookshelves as one of the must-read books of the 2010s (besides the fact that it’s, y’know, great). Read my full review of Girl, Woman, Other here.

The Power by Naomi Alderman

We know that Barack Obama loves to surround himself with powerful women, so it makes sense that The Power would make his reading list (recommended by him back in 2017). In Alderman’s dystopian world (or utopian, depending on how you look at it), women gain an immense and almost-other-worldly physical power. This totally up-ends the patriarchy, which we would all assume to be a good thing – but are there perhaps some unintended consequences? You betchya.

Educated is one of the rare memoirs that retains its status and cut-through even after everyone’s familiar with the writer’s life story. Michelle Obama called it “an engrossing read, a fresh perspective on the power of an education” and “a testament to the way grit and resilience can shape our lives”. Westover certainly has all of those qualities in spades, having spent almost her entire youth ensconced in an extremely isolated family of survivalists. Given Michelle Obama’s ethos of hard work and making the most of opportunity, it makes sense that she’d give this book five stars. Read my full review of Educated here.

Here’s one I didn’t see Barack Obama reading (let alone enjoying): Normal People. Don’t get me wrong, Rooney is quite rightly a literary darling, but somehow I just can’t quite picture him curled up on the couch musing on Marianne and Connell’s latest relationship drama. Just goes to show, you never really know someone, I guess! He included this perennially popular book about the millennial condition in his list of must-reads for 2019. Perhaps one of his daughters gave it to him…? Read my full review of Normal People here.

Speaking of literary darlings: turns out Michelle Obama loves them, too. She’s said she’s a fan of White Teeth, and “love[s] the way the story weaves together so many complex and powerful forces… plus, it’s just plain funny,”. I’m sure the Obamas, more than anyone, would have appreciated any laughs they could get these past couple of years! I can’t say I’d recommend this one for the laughs, but if it tickles your funny bone, power to you.

The best essays are the ones that entertain you while they’re making you think, and that’s what Barack Obama found in Trick Mirror (and subsequently recommended to all of his followers in his 2019 reading list). In this collection of nine startling, original, and raw missives, Tolentino explores all manner of self delusion. This is “a book about the incentives that shape us, and about how hard it is to see ourselves clearly through a culture that revolves around the self”. I’d imagine the Obamas have more to say and think about that than most…

I can only imagine what reading An American Marriage must have been like for the Obamas (yes, both of them – Barack recommended it in his 2018 reading list, and Michelle told a reporter that it was the book on her nightstand shortly after). It’s what could have been, in some ways. The main characters, Roy and Celestial, are a young black couple on the rise, as the Obamas were back in the day – only things go terribly wrong when Roy is falsely accused, and subsequently imprisoned, for a crime he did not commit. This is a story of a marriage under unimaginable pressure, against the backdrop of black incarceration in the U.S. Read my full review of An American Marriage here.

Not only was Trust Exercise one of Barack Obama’s picks for his 2019 reading list, it also won the National Book Award that year – two commendations to be held in equal esteem, surely! It was a remarkably timely release for a book interrogating sex and power and the abuse of both, with more #MeToo allegations coming to the world’s attention and the consequences for many of the initial revelations finally coming to fruition. The story is made all the more unforgettable for its eerie setting, the frightfully forced intimate environment of a performing arts school.

And, just to really hammer home the nostalgia, let’s cast our eyes back all the way to when the Obamas still lived in the White House. In 2016, as his presidency wrapped up, Barack released his summer reading list and The Underground Railroad was on it. It’s only in retrospect that I can see how brave that really was, given that this book is a heart- and soul-wrenching speculative account of the horrors wrought by the slave trade and the lengths that slaves had to go to escape them. It’s “both the gripping tale of one woman’s will to escape the horrors of bondage—and a powerful meditation on the history we all share,”. Read my full review of The Underground Railroad here.