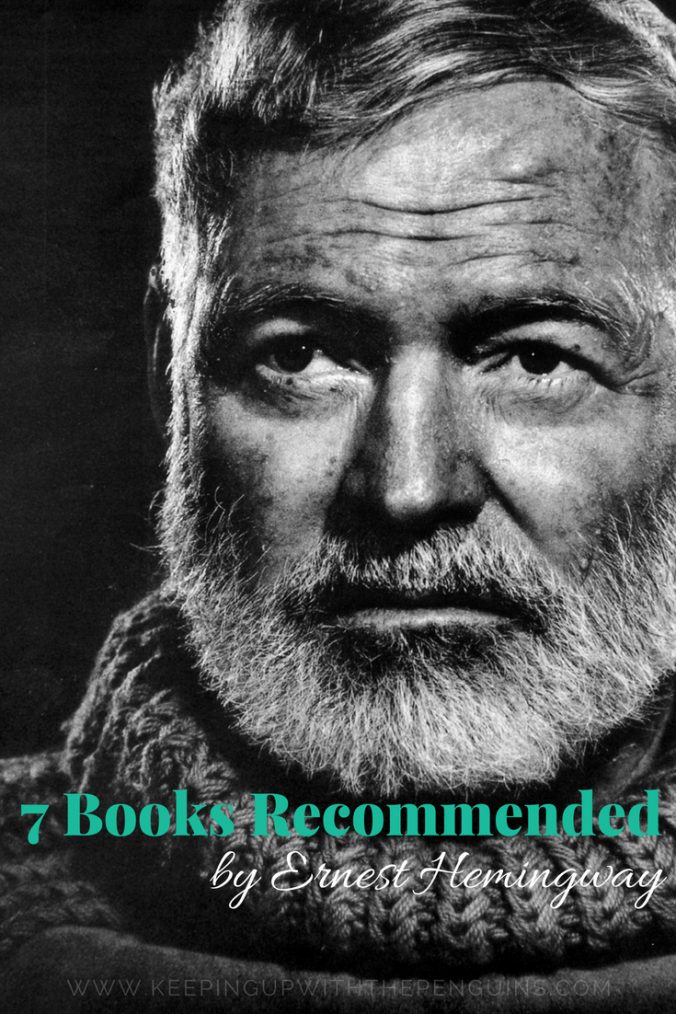 Ernest Hemingway was no slouch when it came to writing, as we’ve established, but perhaps his true talent actually lay in reading. He would read anywhere up to ten books at a time, plus squeezing in at least a few newspapers and journals every single day. He would travel with a huge bag full of books for reading on the journey. The dude was voracious, in more ways than one.

In 1934, aspiring writer Arnold Samuelson knocked on Hemingway’s door, and asked to pick his brain. It was a ballsy move, given that Hemingway had a reputation for (a) being grumpy, and (b) liking guns. And yet, Samuelson wound up becoming Hemingway’s only true protégé, working in his employ and following him around the world for nearly a year. During that time, Hemingway was kind enough to jot down a list of books that (according to him) all writers must read. Samuelson kept the list, and published it in his book With Hemingway: A Year in Key West and Cuba. Hemingway told Samuelson not to bother with writers of the day, and focus on becoming better than his favourite dead white guys: Tolstoy, Dostoyevsky, Flaubert.

Then, the following year (1935), Hemingway wrote a piece for Esquire magazine (Remembering Shooting-Flying: A Key West Letter). Perhaps inspired by his list for Samuelson, he digressed from his point briefly to give us another list – the books he desperately wished he could read again for the first time. In fact, he put his money where his mouth is, and said that he would rather have another chance to read any one of them for the first time than have an income of a million per year. Big talk, eh? He lamented that there were “very few good new ones”, and that perhaps his days of enjoying previously-undiscovered literature were behind him (so dramatic).

Anyway, given that the guy clearly knew his shit, it might be high time we review a list of books recommended by Ernest Hemingway. (Pay extra-close attention if you’re an aspiring writer, there’s bound to be something in here for you…)

I’ve mentioned before that I think Emma Bovary is one of the best “bad women” in literature. Flaubert’s Madame Bovary follows the story of her attempts to escape the intolerable boredom of her provincial married life. She descends into a spiral of alcoholism, adultery, and debt, unraveling and undone by her unwieldy desires. It is a story exquisitely told, and the woman isn’t exactly painted in the best light – so it’s no surprise that it was right up Hemingway’s alley.

Dubliners is a collection of fifteen stories, all centered around Joyce’s distaste for his ‘dear dirty Dublin’, exposing the corruption, vulgarity, and heartlessness of his city of birth. The collection was the first notable publication of 20th century realist literature coming from Ireland, and to this day it is celebrated for its artful depiction of the infamous Dublin accent. I haven’t read Dubliners myself (I tackled Ulysses instead), but Hemingway’s recommendation of this gritty, brutal read still counts for something.

Another one of my favourite bad women – are you sensing a theme in books recommended by Ernest Hemingway? Anna Karenina is widely considered to be one of the best love stories (indeed, one of the best novels) ever written, so hats off to Tolstoy. Anna, a beautiful but self-indulgent woman, seeks the love of Count Vronsky (who is definitely not her husband), and basically sets fire to her 19th century Russian life. Tolstoy’s writing is beautiful, passionate, and intense – not for the faint of heart, though undoubtedly easier to tackle than the doorstop-worthy War & Peace (which also featured on Hemingway’s lists).

The Brothers Karamazov by Fyodor Dostoyevsky

Hemingway didn’t want to make it easy for us! Dostoyevsky’s Crime and Punishment isn’t that tough to get through, but Papa recommended The Brothers Karamazov, a more complicated and controversial novel. The story kicks off with the murder of cruel and corrupt landowner Fyodor Karamazov, and follows the fallout in the lives of his three sons (well, four, if you count the illegitimate son posing as a manservant). It’s a detective story, in a way, but it’s no Sherlock Holmes – you’ll need your thinking cap on for this one.

Wuthering Heights is definitely one of the more readable books recommended by Ernest Hemingway, so it might be best to start here if you’re new to the game. I once described Emily Brontë’s only novel in a single sentence thus: A bad boy’s decade-long butthurt over getting friendzoned, culminating in his death – at which point, he and his true love spend eternity haunting their old stomping grounds, while their surviving children enter into incestuous marriages. Yes, it’s a long sentence, but I still think it’s a fairly accurate summary. Read my full review of Wuthering Heights here.

The American by Henry James

Hemingway was the archetypal American “ex-pat” (because we only call brown people “immigrants”). He spent a decent chunk of his life in France and Spain, shooting and fishing and running with bulls. So it’s no surprise that he was really into The American, a story of a wealthy American man trying to marry into the French aristocracy. James dissects the cultural differences between Americans and Europeans in a melodramatic, but ultimately kind of comedic, way.

The Adventures of Huckleberry Finn by Mark Twain

Hemingway is quoted as saying he considered The Adventures of Huckleberry Finn “the best book an American ever wrote”, and that it “marks the beginning of American literature” (kind of like Lennon saying that, before Elvis, there was nothing). It’s a big call, but I think we can all agree that Huck Finn is one of Twain’s most enduring and celebrated works, at least. It is the sequel to his previous (also renowned) The Adventures of Tom Sawyer, and it explores the conflict between civilisation and nature – a lofty topic if there ever was one. Read my full review of The Adventures Of Huckleberry Finn here.

In the end, you can be pretty confident that any book recommended by Ernest Hemingway is going to be a heavy read. Everything he loved explored the underbelly of humanity in some way, and it seems like they got bonus points if they did it in Europe, or featured bad women front and center.

What do you think of Hemingway’s recommended reads? How many have you read?