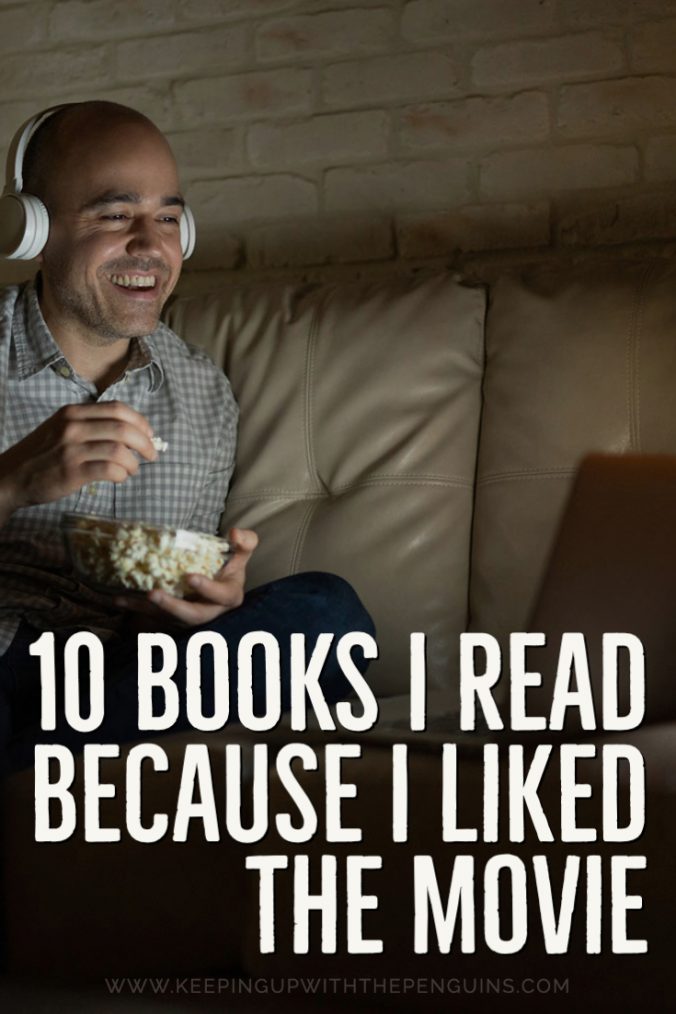 10 Books I Read Because I Liked The Movie

Nine times out of ten, when I watch a new movie or series, it’s an adaptation of a book I’ve read. I’m always curious to see how directors and actors translate a story to the screen. But, sometimes, it’s the other way around – I enjoy a movie or series and then realise that it’s based on a book, or that the book might be worth reading more than I thought. Here are ten books I read because I liked the movie.

Okay, fine, I’ll cop to it: I’m a basic bitch. I binged the Bridgerton series on Netflix. Twice. And when I saw the book on sale (with the basic-bitch movie cover, no less!) for twelve bucks, I snapped it up. For those of you who have been living under a particularly large rock, this is a Regency romance series based on the series of books by Julia Quinn. The Duke And I is the first book in the series, focusing on the marital prospects of the eldest Bridgerton daughter, Daphne. The Netflix adaptation, a Shonda Rhimes masterpiece, was so good (and so horny, yewwww!), I couldn’t help but dive in to the original material. Read my full review of Bridgerton: The Duke And I here.

Thank You For Smoking by Christopher Buckley

Thank You For Smoking (2005) is one of my favourite movies of all time. It follows Nick Naylor (Aaron Eckhart), chief spokesperson for a major tobacco lobby, as he tries to convince the world that cigarettes won’t kill you (or, if they do, at least you’ll die with liberty). The thing is, I didn’t even realise it was a book, the 1994 novel Thank You For Smoking, until I spotted a copy for $4.99 in a remainder book shop while I was waiting for a train. I was disappointed to discover that the jokes and satire fell a bit flat on the page, where they truly sparkled on the screen. Still, it wasn’t a total waste of a fiver… Read my full review of Thank You For Smoking here.

The Adventures Of Sherlock Holmes by Arthur Conan Doyle

I didn’t read The Adventures Of Sherlock Holmes just because of the BBC adaptation starring Benedict Cumberbatch… but it certainly didn’t hurt! The contemporary adaptation for screen puts Watson and Holmes in modern-day London, where the mysteries are high-tech versions of the original 19th century stories. Ironically, given Doyle’s economy of language and his very-short-yet-highly-complex Holmes installments, the episodes of Sherlock are loooong – usually at least 90 minutes. Still, they’re so gripping, that run-time just flies by! Read my full review of The Adventures Of Sherlock Holmes here.

A Game Of Thrones by George R.R. Martin

For a while there, there was nothing worse than the workplace bore who chimed in on the morning-after Game Of Thrones chat, just to say that they already knew what happened because they read the books. Ugh! I wonder where they find their satisfaction now… Anyway, like most of the world, I first encountered George R.R. Martin’s epic fantasy series via the HBO adaptation. Given that I’m not typically a high fantasy reader, I think that was actually a good way to do it. The world is so vast and complex, I would’ve been completely lost without the existing visual reference points from the show. Read my full review of A Game Of Thrones here.

The Hunger Games by Suzanne Collins

I actually really, really like the Hunger Games films. The first is obviously the best (isn’t it always?), but I’ve definitely comfort-binged them all back-to-back a couple of times. My impressions of the book, when I finally got around to reading it, were definitely coloured by the films – and, in an unexpected plot twist, I actually thought the films were better. Perhaps that’s because I’m getting old and I couldn’t stand the narration of sixteen-year-old Katniss Everdeen. The films have a subtlety that you just can’t get when the protagonist is spoon-feeding you her every supposition. Read my full review of The Hunger Games here.

Julie and Julia by Julie Powell

I loved the movie Julie And Julia. I can’t remember how I came to watch it, but when I learned later that it was Nora Ephron’s final film before her passing, that totally tracked. The film has everything: Ephron! Meryl Streep! Stanley Tucci! A quirky protagonist with a non-romantic goal! Another quirky protagonist with an iconic accent! I actually wasn’t all that keen to read Julie Powell’s memoir, Julie And Julia, until I heard a review on the To Read List Podcast that piqued my interest. It was pretty good.. but not as good as the movie. Read my full review of Julie And Julia here.

Some people grew up with Little Women, the classic Louisa May Alcott “moral book for girls” about four sisters who fight their way out of poverty and patriarchal oppression to find their own paths in live. I grew up with the 1994 film version, starring Winona Ryder as Jo, Christian Bale as Laurie, Susan Sarandon as Marmee, and a very young Kirsten Dunst as Amy (my favourite… at the time). I know Greta Gerwig’s 2019 version gets all the love, but my heart belongs to my childhood favourite. It was very faithful to the book, to my pleasant surprise when I finally got around to reading it as an adult. Read my full review of Little Women here.

The Other Boleyn Girl by Philippa Gregory

I suppose, technically, I only watched The Other Boleyn Girl because I so loved the Horrible Histories books about the Tudors when I was a kid. Does that make this a book I read because I loved the movie because I loved a book? Whatever the case, in my humble opinion, the film adaptation of Philippa Gregory’s historical romance is horribly underrated. The book? Not so much. The story was far more fun when I could watch Eric Bana throw his weight around, as Scarlett Johansson and Natalie Portman competed viciously for his attentions. Read my full review of The Other Boleyn Girl here.

The Perks Of Being A Wallflower by Stephen Chbosky

The journey to reading The Perks Of Being A Wallflower by Stephen Chbosky was a long one, for me. See, in my memory, I’d actually mixed up the film adaptation (starring Logan Lerman, Emma Watson, and Ezra Miller) with the movie It’s Kind Of A Funny Story (starring Keir Gilchrist and Emma Roberts). In my defence, they’re both about kooky depressed kids who come-of-age while battling mental illness and social/family problems way beyond their ken. Still, it worked out well – I actually quite enjoyed the book, even though it wasn’t what I was expecting! Read my full review of The Perks Of Being A Wallflower here.

I don’t even remember how I ended up watching The Cry miniseries – I guess I saw a lot of ads for it in between news bulletins on the ABC? It was one of my best television-watching experiences in years (not that that’s saying much), and when I learned (literally years later!) that it was based on a book, The Cry by Helen Fitzgerald, I knew I had to read it. Of course, I already know the “shock twist” ending, but it’s such a brilliant story that I couldn’t resist the opportunity to experience it all over again anyway. Plus, knowing the ending gives me the chance to sniff out all the clues that Fitzgerald dropped along the way! Read my full review of The Cry here.