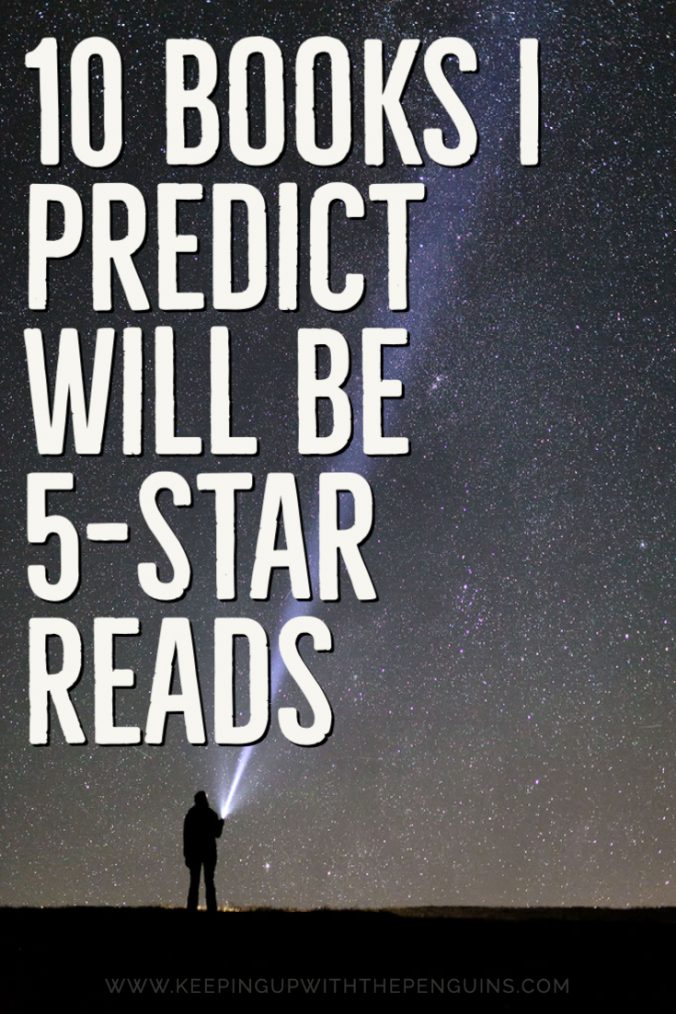 Obviously, whenever we booklovers pick up a book – any book – we hope against hope that it’s going to be a 5-star read. We cross our fingers every time that we’re embarking on a journey with our new favourite book. Otherwise, we’d surely give up! But some seem more likely, more promising than others. Sometimes, you just get The Vibe – from the cover, the blurb, the author’s previous books, whatever – that it’s going to be a 5-star read. Taking my inspiration from beachesandbooks, I’ve put together this list of books I predict will be 5-star reads. (I’m hoping to get to most, if not all(!), of them by the end of the year – so keep checking back in to see how I go!)

Say Nothing by Patrick Radden Keefe

I loved, loved, loved Patrick Radden Keefe’s Empire Of Pain – an investigation into the Sackler family, the dynasty behind Oxycontin (one of the deadliest prescription drugs ever developed). I’m also a little (ahem!) obsessed with the Netflix show Derry Girls, about life on the border during The Troubles in Ireland, and true crime books and podcasts. Say Nothing is the dovetail of all of these passions: Patrick Radden Keefe’s first book, an “incendiary modern history of the bloody sectarian conflict in Northern Ireland” told through the story of the abduction and murder of Jean McConville. I’m confident Radden Keefe can make it back-to-back 5-star reads!

Verdict: Close! I give this one a strong 4/5 stars. Read my full review of Say Nothing here.

Everything I Never Told You by Celeste Ng

I’ll admit I was a bit late to the party with Little Fires Everywhere, but when I got there… hoo, boy! I partied hard! I was so impressed with the relationships that Celeste Ng wove and represented so deftly, the completely believable dynamics she created, the compelling story she crafted. I couldn’t press “Buy Now” on her backlist novel, Everything I Never Told You, fast enough! It promises to be another 5-star read. In suburban Ohio in the 1970s, a Chinese American family has lost their favourite daughter. Lydia is dead, but they don’t know it yet, and their perfectly calibrated world is about to collapse into chaos.

Verdict: Close again! 4/5 stars. Read my full review of Everything I Never Told You here.

I’m not a gushy person. Most romances make me roll my eyes, rather than putting little hearts in them. I had no reason to suspect that #bookstagram darling Red, White and Royal Blue would be any different. I didn’t even bother reading the blurb! Then, the wonderful team at Macmillan were kind enough to send me a copy of Casey McQuiston’s follow-up, One Last Stop, for review. It bowled me over, Keeper Upperers: here was a romance that was queer, quirky, fun, and not too saccharine. I got around to checking out the blurb on her break-out novel, and found it promised more of the same! I’m so sure it’s going to be a thoroughly delightful 5-star read, I’m saving it for a special occasion.

Verdict: This one came SO CLOSE! But it suffered from having such a high bar set by McQuiston’s other novel I’d read. 4/5 stars. Read my full review of Red, White & Royal Blue here.

I have been desperate to read Willful Creatures ever since I first heard it reviewed on The To Read List Podcast. I had a devil of a time trying to track down a copy; eventually, I ordered it print-on-demand (as a little treat to myself in spicy-cough isolation). I’m sure it’s going to be worth the wait! It’s a short story collection with a hearty dose of magical realism. According to the blurb, “[t]his is a place where a boy with keys for fingers is a hero, a woman’s children are potatoes, and a little boy with an iron for a head is born to a family of pumpkin heads. With her singular mix of surrealism, musical prose, and keenly felt emotion, Bender once again proves herself to be a masterful chronicler of the human condition.”

Verdict: Ooft, this one was a real nail-biter. I ummed and ahhhed for ages, but ultimately decided to go with four stars. But even as I say that, I might change my mind! Read my full review of Willful Creatures here.

We Keep The Dead Close by Becky Cooper

I’m a long-time bone-deep true crime junkie, so of course We Keep The Dead Close piqued my interest. It’s “a tour de force of investigative reporting” from a former research assistant, paralegal, and Harvard student who heard about a decades-old cold case and couldn’t let it go. In 1969, when so much else was happening, Harvard was undertaking an ambitious merger with its sister school to become co-educational, and one of its students was found in her apartment, murdered. When Cooper first heard the story, in the mid-2000s, the rumour went that Jane Britton, an ambitious 23-year-old graduate student, had been murdered by her professor for threatening to reveal their affair, but – as Cooper soon discovers – that’s not even a half-truth. It’s a real-life dark academia story, Keeper Upperers, and it’s sure to be a 5-star read!

Verdict: This one was really tough, in the sense that I went back and forth on whether to give it four or five stars. In the end, I settled on four, if only to preserve the integrity of my hallowed 5-star rating, but damn – it’s still a real good read! Check out my full review of We Keep The Dead Close here.

The premise of Happy Endings was enough to convince me it’s going to be a 5-star read: “Trixie Nguyen is determined to make her sex toy business a success, proving to her traditional Vietnamese parents that she can succeed in a nontraditional career. She’s made a fresh start in Washington DC, and her first pop-up event is going well—until she runs into the ex who dumped her. With a Post-it note.” Sex toys? Second chances? Unfinished business? Yes, please! All the better that it comes from a debut novelist, one who founded the Bawdy Bookworms subscription service (that pairs sexy romances with erotic toys for subscribers), no less!

Verdict: This one didn’t quite reach the pinnacle. 3/5 stars. Read my full review of Happy Endings here.

The Five by Hallie Rubenhold

Speaking of being a true crime junkie: the genre has long had many problems, one of them being its misrepresentation of, and disrespect for, victims. When I heard that Hallie Rubenhold had written The Five to start redressing the balance for the most infamous cold case in history, I knew instantly it would be a cracking 5-star read. Everyone knows the moniker Jack The Ripper, and the outline of his crimes, but what of his victims? At most, people “know” (assume) that they were sex workers, destitute, desperate – how else could they have ended up on the end of his knife? It turns out everything we know about “the five” is wrong, and I’m really looking forward to Rubenhold telling me the truth.

I don’t even remember how I ended up watching The Cry miniseries – I guess I saw a lot of ads for it in between news bulletins on the ABC? It was one of my best television-watching experiences in years (not that that’s saying much), and when I learned (literally years later!) that it was based on a book, The Cry by Helen Fitzgerald, I knew I had to read it. Of course, there’s the risk that the book won’t live up to the TV adaptation (how often does that happen? ha!), and I already know the “shock twist” ending, but it’s such a brilliant story I’m sure the book will tell it just as well as the screen.

Verdict: Ding! Ding! Ding! We have a winner! 5/5 stars. Read my full review of The Cry here.

Everything I’ve heard about Grady Hendrix and his books has served to inform my opinion that he is a genius and they’re all sure to be 5-star reads. I’m planning to start with Horrorstör, because the design is absolutely gorgeous (it’s laid out like an IKEA catalogue) and it deserves five stars for that alone. The contents sound great too, though: a haunted house story set in a furniture superstore. “To unravel the mystery, three employees volunteer to work a nine-hour dusk-till-dawn shift. In the dead of the night, they’ll patrol the empty showroom floor, investigate strange sights and sounds, and encounter horrors that defy the imagination.”

Wow, No Thank You by Samantha Irby

I’m not ashamed to admit that there are some books I pick up for the title alone: Wow, No Thank You is one of them. It’s a 5-star title that makes me giggle every time I see or hear it. It turns out, this is Samantha Irby’s third book, a collection of essays in which “[s]he goes on bad dates with new friends, spends weeks in Los Angeles taking meetings with “tv executives slash amateur astrologers” while being a “cheese fry-eating slightly damp Midwest person,” “with neck pain and no cartilage in [her] knees,” who still hides past due bills under her pillow.” That sounds relatable as all heck, and just as funny as the title!

Verdict: I think Samantha Irby and I would be BFFs, even though I gave this one 4/5 stars. Read my full review of Wow, No Thank You here.