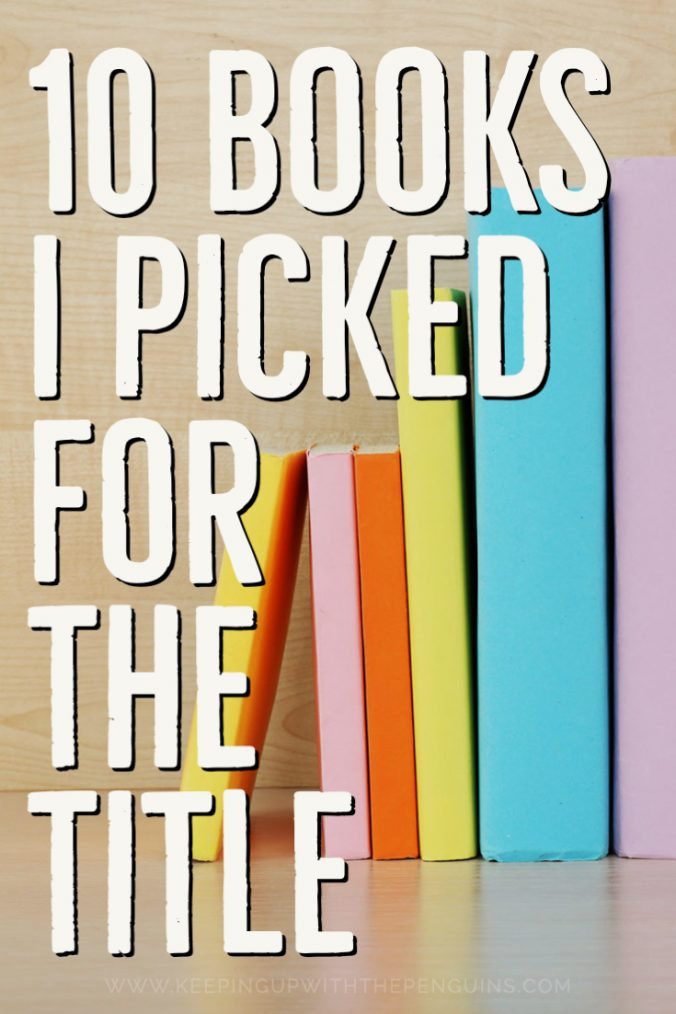 10 Books I Picked For The Title

We all know that we’re not meant to judge a book by its cover… but judging it by its title should be fine, right? Along with the cover, a book’s title is the most important attention-grabber. A title that stands out on the shelves, or sticks in a reader’s mind, gets the author most of the way towards having their book read. Here’s a list of ten books I picked for the title.

How To Lose Friends And Alienate People by Toby Young

How To Win Friends And Influence People is the O.G. self-help book, chock-full of useful advice like “remember people’s names” and “make them feel good when you’re around them”. It works, but it’s cliche as all heck. That’s why my eyes were drawn to How To Lose Friends And Alienate People – a dark satirical take on one of the best-selling smarmy-charm books of all time? Yes, please! This is one of the first books I picked for the title, and also one of the books I picked up because I enjoyed the movie.

Why Be Happy When You Could Be Normal by Jeanette Winterson

Anyone who has ever felt like they don’t quite fit in will surely relate to the title of Jeanette Winterson’s memoir, Why Be Happy When You Could Be Normal. The tone of the title changes depending on how you read it. When I first saw it (which made this one of the books I picked for the title), I thought it was a funny, wry take on “being yourself”. But the content of the book reveals that it’s darker and more serious than that. A bit of a bait-and-switch, but that’s what happens when you make snap judgements about books and their titles/covers!

I Will Judge You By Your Bookshelf by Grant Snider

Of all the books I picked for the title, this is the one that all booklovers will understand: Grant Snider’s I Will Judge You By Your Bookshelf. It’s a slightly-snarky but otherwise-innocuous sentence that will resonate with anyone who has ever had a perve at the shelves of a new friend. Or anyone who spent the whole pandemic squinting to see the spines in someone’s Zoom background. The contents will make bibliophiles Feel Seen, too. It’s a collection of Snider’s comics about bookishness in all its forms and the love of reading.

They Both Die At The End by Adam Silvera

Avoiding spoilers is basically a full-time job. If there’s something popular you want to watch or read without knowing the ending, you have to avoid the news, your emails, all forms of social media… which is why They Both Die At The End is one of the books I picked for the title. Silvera is my hero for thumbing his nose at the convention of secrecy and giving it all away up front. This profound novel proves that even if we “know” the ending, there’s still joy and wonder to be found along the way (or something less sappy than that).

My Mess Is A Bit Of A Life by Georgia Pritchett

My Mess Is A Bit Of A Life – haven’t we all felt that way at one point or another? If you’re some kind of incredible superpowered unicorn that has never fumbled their words when overly anxious, you might not understand why this is one of the books I picked for the title, but the rest of you mere mortals will get it. Pritchett is a TV writer and producer by trade, and this is her memoir – told in “gloriously comic vignettes” – about learning to live, even thrive, with anxiety. The title perfectly captures her refreshingly honest and humourous approach. Read my full review of My Mess Is A Bit Of A Life here.

The Subtle Art Of Not Giving A Fuck by Mark Manson

Remember that delightful trend of self-help books with profanity in the title? It kind of gave way when the pandemic happened and self-help wasn’t cutting it for any of us, but if you cast your mind back you’ll recall it all began with The Subtle Art Of Not Giving A Fuck. Mark Manson posits that we should reject the culture of toxic positivity that has given us all the mistaken impression that we can fix our lives with happy thoughts. It’s a compelling thesis, but it’s the book’s title that really grabbed the world’s attention and made the book a best-seller.

I Love Dick by Chris Kraus

I Love Dick is one of those books I picked for the title because, no matter where you read it or who’s around you, someone will raise their eyebrows and/or get weird about it. And it’s hilarious, every damn time! In fact, a while back I even decided that I Love Dick would make My Kondo 30 (the 30 books I would keep if I were to go minimalist) because just having it on your shelves is such a great conversation starter. Even for people who have never read it, never heard of Chris Kraus, have no opinion on autofiction or psychosexual obsession – the title is enough to keep the chat going.

Wow, No Thank You by Samantha Irby

I knew nothing about Samantha Irby – I hadn’t read either of her previous books, or her blog – when I first saw Wow, No Thank You, but based on the title alone I knew I had to have it. In those four little words, this book title communicates a certain frankness, a wry honesty to which I aspire in my life. How often do we say “yes please” when we’d really rather say “wow, no thank you”? This is a collection of essays about being in your forties and turning down things you “should” jump at (also about bodily fluids, awkwardness, and making the most of a shit sandwich). Read my full review of Wow, No Thank You here.

You’ll Be Sorry When I’m Dead by Marieke Hardy

If you never said anything along the lines of You’ll Be Sorry When I’m Dead as an angsty teenager, then we probably don’t have a lot in common. Marieke Hardy is living the dream, though – she’s grown out of her angsty teenage years and actually named her memoir for the lament! This book is “a chronicle of broken hearts, fervid pursuits, passionate friendships, deranged letter-writing, the allure of the bottle, the singular charms of musicians, the lost song of youth, and three very awkward evenings with varying prostitutes-exactly zero percent of which the author’s parents will want to read”.

Wow, No Thank You – Samantha Irby

Out Of Breath – Anna Snoekstra