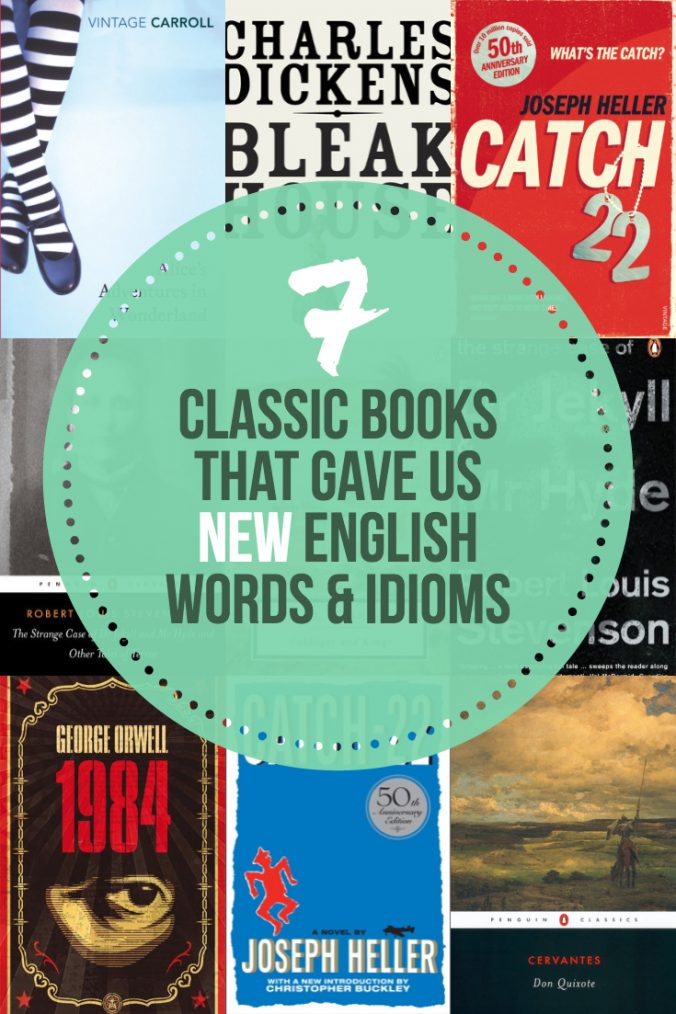 Ever been stuck in a no-win situation? A ridiculous double-bind? Found yourself hamstrung by bureaucracy? Maybe you’ve been charged a fee for not having enough money in your account, or found yourself unable to get a job without any experience, or denied tenancy in a new apartment without a current personal address. You might have called the situation a “catch-22”, even if you’ve never read the book that gave us the term (maybe you never even knew it was from a book, no judgement!). So many words and idioms slip into our language, but how often do we really know where they come from? Check out these seven books that gave us words and catch phrases we use every day.

A catch-22 is widely understood to mean a predicament where the very nature of the problem prevents it from being resolved. It originated with Joseph Heller’s book Catch-22: the main character, Yossarian, wants to be excused from flying any more missions in the military (because every time he pilots a military plane, he risks death). He finds himself butting up against “catch-22”: pilots who are declared mentally unfit do not have to fly any more missions, but pilots who request to be declared mentally unfit are clearly of sound mind (as they want to avoid dying), so they must fly. Fun fact: the book might have actually been called Catch-18 (sounds funny, doesn’t it?), as that was Heller’s original title, but he and his publisher agreed to change it when other novels featuring the number eighteen in their title appeared around the same time. Read my full review of Catch-22 here.

I had to triple-check this, because it didn’t seem right, but believe it or not it was Dickens who gave us the word “boredom”! English-speakers had been using the word “bore” for about a century, but Dickens was the first to turn the feeling into a noun. It appeared in his 1853 novel Bleak House. How on Earth could we have lived without a word for that? Thank you, Dickens!

Cabbages and Kings by O. Henry

What would you call a tropical nation with an unstable government and an over-reliance on the export of a single product? A “banana republic”, of course! The term is drawn from the novel Cabbages and Kings, published in 1904; it is set in the fictional “Republic of Anchuria” in Central America. The Republic’s primary export was – you guessed it – bananas. Funnily enough, the title of the book was itself drawn from The Walrus and The Carpenter, a poem that appeared in Lewis Carroll’s Alice’s Adventures in Wonderland.

I still remember my mother explaining to me the meaning of the phrase “a pot calling the kettle black”. As I recall, she said that it meant to accuse someone of something that you’re doing yourself – which is pretty much spot on. What she didn’t tell me (not that I blame her) was that the idiom was popularised by Miguel de Cervantes Saavedra in Don Quixote back in the 17th century. He lifted it from the common understanding at the time that both pots and kettles made of cast-iron would get black with soot in the kitchens of the era. It’s pretty enduring as far as idioms go, because we still use it today, some four centuries later! Read my full review of Don Quixote here.

Remember I mentioned Alice in Wonderland just before? Well, it warrants its very own spot in this list of books that gave us words and catch phrases! Among a whole bunch of funny turns-of-phrase (“through the looking glass”, “down the rabbit hole”, “Cheshire cat smile”, “off with her head”) we get “mad as a hatter” – meaning seriously bonkers! Well, to put it more politely, someone is “mad as a hatter” if they’re behaving erratically, speaking nonsense, or displaying any kind of unusual behaviour. Carroll borrowed the idea from a well-known phenomenon of hat manufacturers being struck down with mercury poisoning (yes, that was a thing). In so doing, he created his character The Mad Hatter, and a phrase that was cemented into the English language. Read my full review of Alice’s Adventures In Wonderland here.

A lot of the words and catch phrases from 1984 are getting extra air-time at the moment, as a lot of Orwell’s predictions seem to be coming eerily true. Of course, we all understand the concept of “Big Brother” – the totalitarian dictator, always watching and thus completely controlling his society.  Orwell also created “Newspeak”, a fictional language that gave us gems like “doublethink” (being able to hold two contrary or opposing ideas at the very same thing). We really do owe him a lot!

Even if you never read a single one of these books that gave us words and catch phrases, at least you can give a smug smile every time you use one, knowing that you’ll be able to explain the origins of them if anyone asks (and even if they don’t!). Are there any words or catch phrases from literature that I’ve missed? Let me know in the comments (or use them over at KUWTP on Facebook!).

Want more like this? Throw a tip my way, so I can keep on Keeping Up With The Penguins! Easy-peasy to do it, just tap this banner: