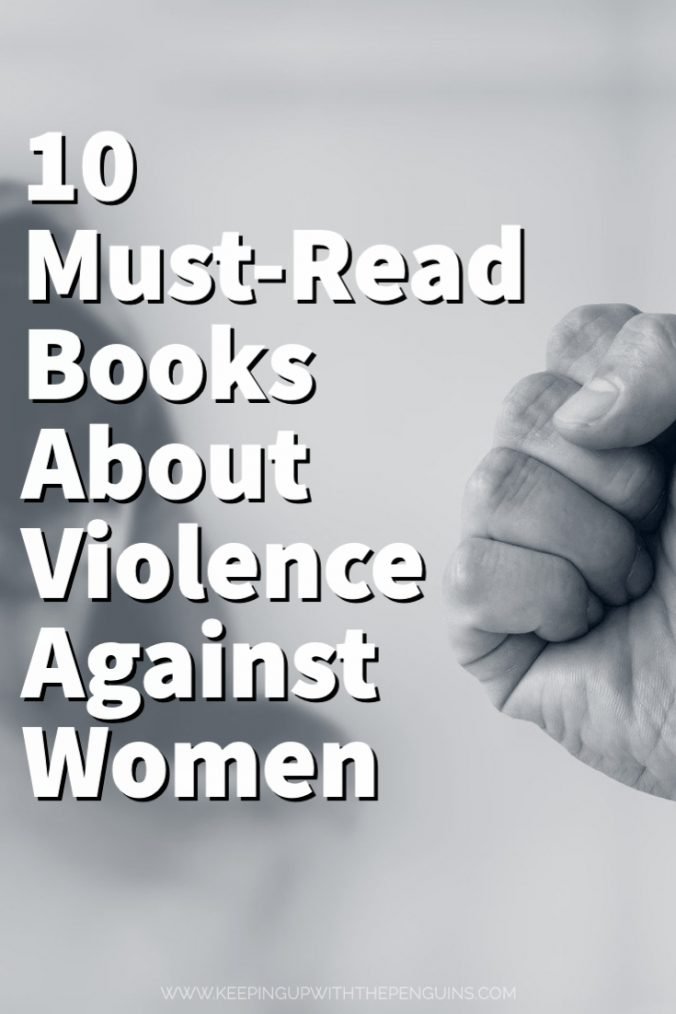 10 Books About Violence Against Women

1 in 3 Australian women (34.2%) has experienced physical and/or sexual violence perpetrated by a man since the age of 15. 1 in 4 Australian women (23.0%) has experienced physical or sexual violence by current or former intimate partner since age 15. Intimate partner violence is the third greatest health risk factor for women aged 25-44, with the first being childhood abuse and neglect. Based on 2015 analysis, violence against women in Australia is costing Australia $21.7 billion each year (source for all stats). Over the past few months, this issue has been front and center in our minds, with Grace Tame being named Australian Of The Year, and the March 4 Justice in major capital cities. As with every major issue of the day, I like to turn to books to help me understand an urgent, thorny, and multi-faceted issue. Here are ten books about violence against women that have informed my understanding…

Important note: Violence against First Nations people in this country is also a major issue, especially the horrifying rate of deaths in police custody. It’s one that deserves far more mainstream attention than it has received thus far. I do plan to address it in a separate post in future, once I’ve carefully reviewed and considered more books on the issue. For now, I’ll draw your attention to the fact to that Aboriginal and Torres Strait Islander women are 32 times as likely to be hospitalised due to family violence assaults as non-Indigenous women, and 1 in 5 Aboriginal and Torres Strait Islander women aged 15 and over has experienced physical violence in a 12-month period, a third of which occurs at the hands of an intimate partner (source).

See What You Made Me Do by Jess Hill

The all-too-common refrain when it comes to domestic abuse is “why didn’t she leave?”. See What You Made Me Do is the first book I’ve read to turn that on its head. Jess Hill won the Stella Prize in 2020 for posing, instead, the questions “why did he hit her?” and “what ‘counts’ as violence against women?”. This book will turn your stomach – Hill doesn’t shy away from the sheer horror of lives lived in the shadow of domestic abuse, and the very worst of where and why it happens. That said, I’ve made it my personal mission in life to make sure more men read this book. I want “nice guys”, “good blokes”, “wonderful fathers”, and all the rest of them to read this one. Can you imagine what would happen if they did?

Eggshell Skull has never been more timely, more essential, than it is right now. In it, the scary-smart Bri Lee simultaneously reckons with the ways in which the Australian justice system works against survivors of sexual and gendered violence, and comes to terms with her own experience(s) of assault and harassment. It’s a unique perspective, one that brings closer together both sides of this issue: that of the victim, and that of the people charged with propping up the structures that fail to support them. The title is taken from a legal concept, whereby “the unexpected frailty of the injured person is not a valid defense to the seriousness of any injury caused to them”.

A New York Times book review called Big Little Lies: “A seemingly fluffy book [that] suddenly touches base with vicious reality”, which is spot on. It might look like a beach read, but it touches on some crucial and timely subjects. All of the women at the center of Moriarty’s domestic thriller have been affected by violence of one kind or another, and all of them are forced to reckon with the fallout. The upside of reading about violence against women in fiction is that there’s opportunity for retribution and resolution, which is all too often absent from the reality. Packaging this story about violence against women in a popular fiction book put it in the hands of many readers and book clubs who might not otherwise have engaged with it. Read my full review of Big Little Lies here.

I will never, never, never tire of recommending this book. In In The Dream House, Machado draws on tropes from dozens of literary traditions – the ghost story, the Choose Your Own Adventure novel, the self-help best-seller, and more. It all works in concert to tell the most intimate and terrifying story many of us could imagine, that of being in love with an abusive partner. Plus, it sheds light on an aspect of this situation far too often overlooked, that of violence and abuse in same-sex relationships. This memoir is not an easy read, but it is an essential one, and so beautifully crafted that it’s impossible to look away, even when your eyes are full of tears. Read my full review of In The Dream House here.

Okay, Lolita is probably not the book you’d expect to find on a list of books about violence against women, but in the interest of a well-rounded perspective, I argue it belongs. Humbert Humbert’s story, of grooming and abusing his step-daughter, is horrifying and stomach-turning, and yet it’s beautifully written and grossly compelling. We need to remember that abusers have their own narrative, their own story in which they are the hero, and as difficult as we may find it, walking a mile in their shoes could be the key to understanding – and, in the long run, preventing – abusive behaviour. Plus, Nabokov was such a singular writing talent, his work deserves to be read.

Here’s another one that probably didn’t jump to mind when you clicked through to a list of books about violence against women: Jane Eyre. Sure, we like to think of it as a romance, and Mr Rochester as a problematic fave, but let’s look at the facts. He marries a woman and, when she demands just a little too much of him (i.e., anything at all), he locks her in the attic and pretends she no longer exists. Then, he sexually harasses his employee, and gaslights her into believing herself to be in love with him. Yes, it takes the shine off the apple of this classic somewhat to look at it this way, but it’s important that we recognise these “romances” for what they are. Read my full review of Jane Eyre here.

For another perspective – possibly a more accurate one – be sure to check out Wide Sargasso Sea by Jean Rhys, which tells Bertha’s story (the wife in the attic).

The Trauma Cleaner by Sarah Krasnostein

Sandra Pankhurst’s life has been marked by violence of all kinds. She was horribly and sadistically abused by her parents throughout her childhood (as punishment, Krasnostein implies, for having been adopted – a surplus child supplanted by two subsequent biological children). She experienced the threat of violence, and actual violence, from clients and cops as a sex worker. She continues to experience the broader structural violence of moving through the world as a trans woman. And yet, The Trauma Cleaner is not a book about her misery. Instead, it’s a book about her incredible resilience, and the empathy she brings to her work in cleaning the homes of hoarders, and the victims of crime. Read my full review of The Trauma Cleaner here.

The Handmaid’s Tale is a crucial pillar in the canon of dystopian literature, but it’s also an exploration of violence against women writ large. Atwood takes the existing systemic violence perpetrated against women in a patriarchal system, and amplifies it to draw our attention. Nothing that happens in her fictional world of Gilead hasn’t already happened – or isn’t already happening – to women somewhere in the real world. This forces us to consider violence against women as something bigger and broader than what happens in the home, behind closed doors. Plus, taken with the sequel The Testaments, it shows us that women can be complicit in this systemic violence, and any system propped up by the violent exploitation of women is inherently unstable. Read my full review of The Handmaid’s Tale here.

The Bass Rock by Evie Wyld

When Evie Wyld won the Stella Prize for The Bass Rock last month, in her acceptance speech she was kind enough to share with us the inspiration that led her to write this particular story. She came across journalist Sherele Moody’s Australian Femicide Map, which documents the deaths of women and children across the country. It led Wyld to think about the generations of women – hundreds and hundreds of them, stretching back millennia – who have suffered violence, often paying with their lives. She wondered what would happen if their stories were kept alive, if they were passed down in a more tangible way. The result is her book, which weaves together the stories of three women in a shared geography, all of whom are the victims of violence at the hands of men. Read my full review of The Bass Rock here.

She Said by Jodi Kantor and Meghan Twohey

She Said will change the way you think about the #MeToo movement. If you think you “already know” the story of Harvey Weinstein’s downfall from the grabs you saw on the news, think again. Kantor and Twohey are the New York Times journalists who worked tirelessly for months on end to outmaneuver Weinstein and his team, in order to bring you the unimpeachable story of his crimes. The lengths to which he went to hide the truth are truly astonishing, and serve as a timely reminder of the methods men in power have used for far too long to keep victims trapped in a vortex of silence and shame. Read my full review of She Said here.