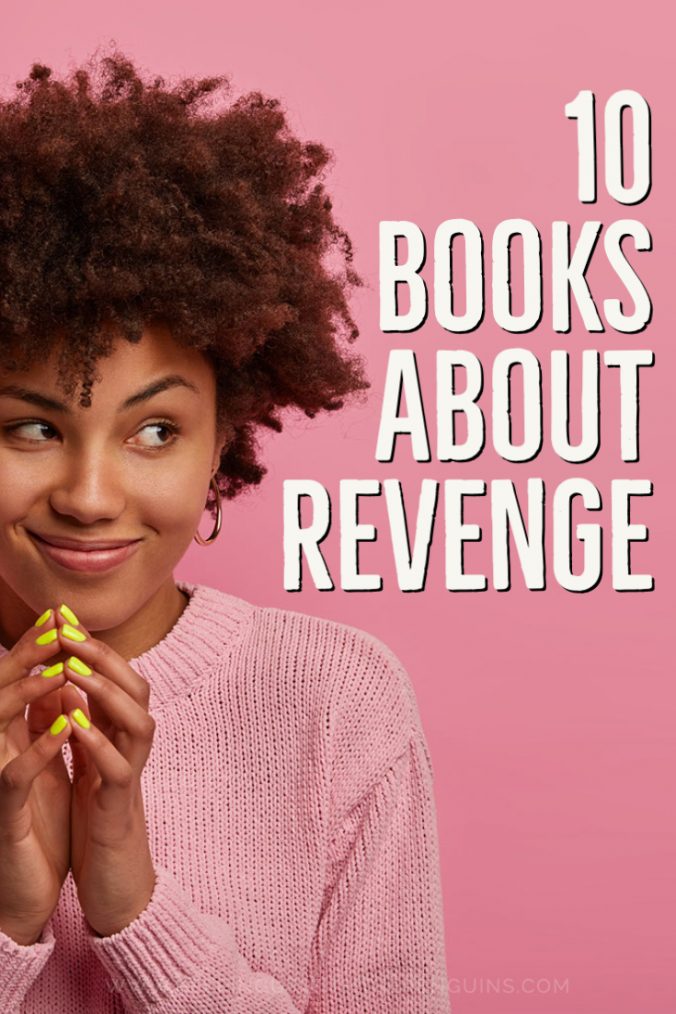 Revenge fantasies aren’t just the stuff of Taylor Swift albums – they’ve inspired plenty of great books, too. For those of us who find vengeance incredibly satisfying (it’s me, hi), books about revenge give us a safe space for cathartic release without actually destroying any lives. Here are ten great books about revenge, from a wide range of eras and genres.

The Count of Monte Cristo by Alexandre Dumas

Alright, let’s get the obvious out of the way. The Count Of Monte Cristo is the ultimate, the GOAT, the pinnacle of all books about revenge. In the hundred-and-eighty-odd years since it was first published, it hasn’t been beat. Dumas’s story of the teenage Edmond Dantès, falsely accused and wrongfully imprisoned, has remained one of the most popular books of the 19th century, despite its length and heft. Perhaps it’s because the story is so enticing (not to mention action-packed); Edmond meets a man in prison who helps him figure out who ruined his life, and plot an elaborate revenge on all of them, with a trove of riches to boot.

If we had to summarise Wuthering Heights, we wouldn’t be far off in saying that Heathcliff responds to rejection by ruining everyone’s lives. Seriously, that’s about it. Emily Brontë’s only novel, a Gothic story of vengeance and undying fury, was so dark and depraved that critics accused her of communing with the devil (seriously). Don’t let all the emo girlies fool you – this is hardly a classic love story for the ages. Rather, it’s a would-be love affair between step-siblings gone wrong that inspires one of the great books about revenge. Read my full review of Wuthering Heights here.

Jumping forward to contemporary books about revenge, we can’t look past Gone Girl, the internationally best-selling story of women’s vengeance. It wasn’t just the fact of Amy’s meticulously plotted and carefully calculated revenge against her floundering, philandering husband that captured us – it was her coldness, her ruthlessness, and her unreliability as a narrator that really made the story stand out. All too often, in books about revenge, we’re shoehorned onto the side of the revenge-taker for narrative convenience. Gillian Flynn challenged that trope by forcing us to delve into the minds of both an impressive but deeply unlikeable woman and her ‘victim’ (who might be just as guilty as she). Read my full review of Gone Girl here.

Sadie is a fun, contemporary twist the tropes of books about revenge for young adult readers, styled in part as the transcript of a true crime podcast. The story revolves around the murder of 13-year-old Mattie Southern, and her older sister Sadie’s disappearance. What the podcast host and his listeners don’t know is that Sadie’s disappearance was of her own design – she’s on the hunt for Mattie’s killer, seeking her own retribution on the man who took her sister. Their stories alternate until they finally catch up with one another in a surprising denouement. It’s the perfect choice for fans of Veronica Mars and other plucky-teen revenge stories. Read my full review of Sadie here.

If you were ever the subject of mean taunts in high-school, books about revenge in that setting probably have special significance for you. Carrie is the prime example: an unfortunate, impoverished girl, subject to cruelty at school and at home, harnesses her powers of telekinesis to exact her vengeance against everyone who has been cruel to her. This is not a story about rising above or taking the high road; this is a story about unleashing your inner monster, and turning to violence and destruction in order to teach some very important lessons. This isn’t one for the squeamish (or readers who are particular about how women are portrayed by male writers), but it’s a classic from the pen of the King of Horror.

To say that Moby Dick is a book about any one thing is hopelessly reductive. It’s a book about many things: whales and whaling, patience, nature, human relationships, isolation, leadership and mutiny, sunk-loss fallacy… and revenge. Captain Ahab, at the helm of the Pequod, seeks revenge on the white whale that bit off his leg in a previous expedition. Although the Pequod’s ostensible mission is to hunt whales for profit, over the course of some six hundred pages it becomes clear that the wider hunt is merely a pretense under which Ahab takes vengeance against the beast who maimed him. Melville’s classic takes many re-reads to fully comprehend, but a reading for themes of revenge is essential. Read my full review of Moby Dick here.

The Silent Patient by Alex Michaelides

A woman with a seemingly-perfect life snaps one day and shoots her husband in the face. Sounds like a fairly standard opener for books about revenge, don’t you think? The Silent Patient has a few twists in store, though. For starters, the woman – Alicia Berenson – has remained steadfastly mute since she murdered Gabriel, and no one can fathom why she might have killed him. Psychotherapist Theo Faber is desperate to find out, and sure that he’s the only man who can get Alicia talking. Why does he care so much about what motivated Alicia’s vengeful turn? Alex Michaelides is the master of plotting out answers that give rise to more questions.

So many young bookworms delight in Matilda – not just because it’s joyful to see a heroine much like yourself on the page, but because she triumphs over her oppressors. For many of us, this was one of the first books about revenge we encountered, and it gave us a taste for vengeance. The young neglected girl’s bookishness becomes her superpower. Cheered along by her teacher Miss Honey (the only kind adult in her life, really), Matilda uses her brain to defeat the terrifying headmistress Miss Trunchbull, and her awful parents to boot. It’s well worth revisiting this one as an adult, if only to rediscover the magic of naive courage and determination.

The Recovery Of Rose Gold by Stephanie Wrobel

Munchausen Syndrome by Proxy is a terrifying but fascinating disease, whereby a caregiver deliberately makes a vulnerable person unwell in order to attract the attention of doctors and other medical professionals. Stephanie Wrobel explores this horrific experience from the victim’s perspective in The Recovery Of Rose Gold (called Darling Rose Gold in some regions), and gives her the opportunity to get her own back on the woman who traumatised her so severely. As a premise for a thriller it’s fresh and fascinating, and it really ups the stakes for books about revenge. Read my full review of The Recovery Of Rose Gold here.

Let’s end on a less depressing note – not all books about revenge involve murder and bloodshed! The First Wives Club sees a group of respectable middle-aged women, all abandoned by their husbands for younger models, seek revenge against the men they helped to make. These ladies refuse to be traded in without a fuss. Over lunch, they begin to plot the downfall of their former husbands, taking away that which they hold most dear – their wealth and prestige in New York’s high society. This is a wickedly fun and delightful novel that looks at the sweet side of revenge.

The Book Of Phobias And Manias – Kate Summerscale