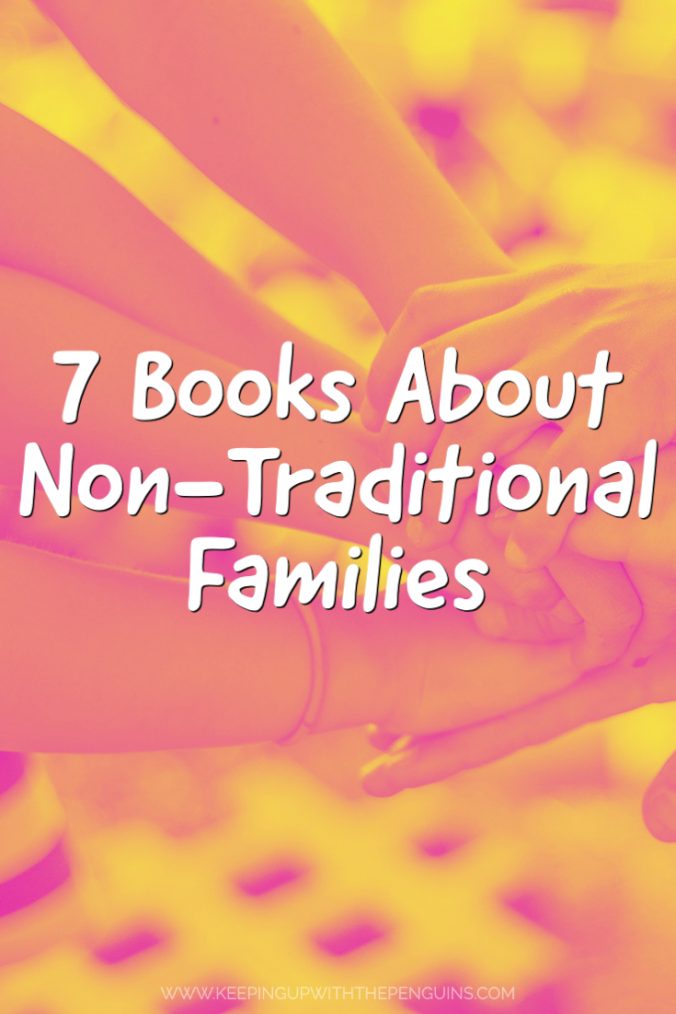 There are certain television moments that stick in your head. One that sticks in mine is Carrie Bickmore, host of The Project (a current affairs/pop-culture program here in Australia), responding to a book by former Australian senator and total drop-kick Cory Bernardi. He suggested that kids of “non-traditional” (i.e., queer, single-parent, etc.) families were more likely to have “criminal tendencies”. Bickmore’s response was simply to say “I grew up in a non-traditional family and I’m currently raising a son in a non-traditional family, so he can get stuffed.” The message really stuck with me, and proof, meet pudding: Bickmore still has her career, Bernardi lost his. My point is, I wanted to put together a list of books about non-traditional families, the kind that fools like Bernardi might look down upon but who share the kind of love to which we all should aspire.

Mad About The Boy by Maggie Alderson

If I were the kind of person who believed in guilty pleasure reads (I’m not, by the way – we should never feel guilty about pleasure!), Mad About The Boy would be mine. I picked it up at a random book sale a hundred years ago, and I’ve re-read it dozens of times since. When Antonia’s husband leaves her for a man, her life falls apart. Thank goodness for Percy, her beloved brother-in-law who sweeps in and makes her world magical again. Gay Uncle Perky (as Antonia’s son calls him) stitches this “broken” family back together again, and while there’s perhaps nothing traditional about a family that features a flamboyant globe-trotting uncle, a vile hairdresser named Greg, and a private-investigator-slash-martial-arts-guru, it’s hard to imagine one with more love.

Amelia’s family is like a house that’s been renovated in different styles, a few times over. Her estranged father lives in Tasmania, but she feels safe enough to flee to him when her world comes crashing down. Her mother and step-father are happy housing her, her brother and the other members of his throuple (yes, throuple) under their roof. They all work in the family’s mortuary and funeral planning business, Amelia being a particularly talented corpse cosmetician. New Animal is a sex-and-death novel, but it’s one unlike any you’ve read before. In addition to the higgledy-piggledy relationships, it’s refreshing to see a book about kink (despite its problems) making it in the mainstream. Read my full review of New Animal here.

When We Were Vikings by Andrew David McDonald

Zelda is 21 years old. She lives with her older brother, Gert, and she’s obsessed with Vikings. Not the TV show, or the football team – literal Vikings, the Norse people who kicked around Northern Europe up until the 11th century. Zelda’s a little bit different, and she knows that, but with the help of her brother she’s figured out how to get by in the world. She’s ferociously protective of her family of two, and she’ll do anything to help her brother get out of trouble. Despite dealing with some very dark themes (trigger warnings for violence, abuse, and rape), When We Were Vikings is a surprisingly charming and endearing novel from debut author Andrew David MacDonald. Read my full review of When We Were Vikings here.

The Nancys by R.W.R. McDonald

Tippy Chan is the only Asian kid in her small New Zealand town – that might be enough to make her and her family outsiders, but there’s other stuff, too. Her dad is dead, for one, and her mother has removed every photo of him from the house. Her closest extended “family” is Mrs Brown next door, and the scary chain-smoking would-be-beauty-queen granddaughter Melanie. When Tippy Chan’s mother wins a two-week cruise, her non-traditional family expands to include her Uncle Pike (who bears a startling resemblance to Santa Claus) and his fabulous boyfriend, Devon, fresh off the plane from Sydney. Together, they form The Nancys, a group dedicated to solving the mystery of a local school teacher’s murder (and they do makeovers, on the side).

The Argonauts by Maggie Nelson

The Argonauts is a work of “autotheory” (academic writing combined with and supported by memoir), and it has become one of the definitive books about non-traditional families in the 21st century. Nelson and her partner, Harry, forged a family through the fires of IVF and gender-affirming treatments. Harry brought a step-child to their union, Nelson eventually became pregnant, and the four of them now live together in happy harmony – despite the confusion, judgement, and (especially sadly) outright hostility their family faces from certain (ahem) parts of society. Nelson brings her critical mind and wealth of knowledge to this book, in which she examines gender, sexuality, motherhood, and the family unit. Read my full review of The Argonauts here.

We Are All Completely Beside Ourselves by Karen Joy Fowler

It’s a little difficult to explain what exactly makes the family at the heart of We Are All Completely Beside Ourselves non-traditional without dropping a massive spoiler… so you’ll just have to trust me. Both of Roesmary’s older siblings are notably absent (one apparently in some kind of legal trouble, the other vanished mysteriously some time ago), and her relationship with her parents stinks. But why? Fowler’s story of this highly unusual family history will shock you in the best possible way, and force you to reconsider everything you think you know about what it means to be a “family”. Read my full review of We Are All Completely Beside Ourselves here.

A Little Life by Hanya Yanagihara

You could hardly call A Little Life an uplifting read, it’s notoriously depressing and I must offer trigger warnings for everything you can imagine. But despite all the misery, it’s also about finding family, and learning to surround yourself with people who support and uplift you, even when it ain’t easy. Jude St Francis had a very (very!) rough start in life, and things didn’t improve for a long time, until he befriended three boys in college. Those friendships deepened and strengthened, and shaped each of the boys in ways that completely changed the courses of their respective lives. Read my full review of A Little Life here.