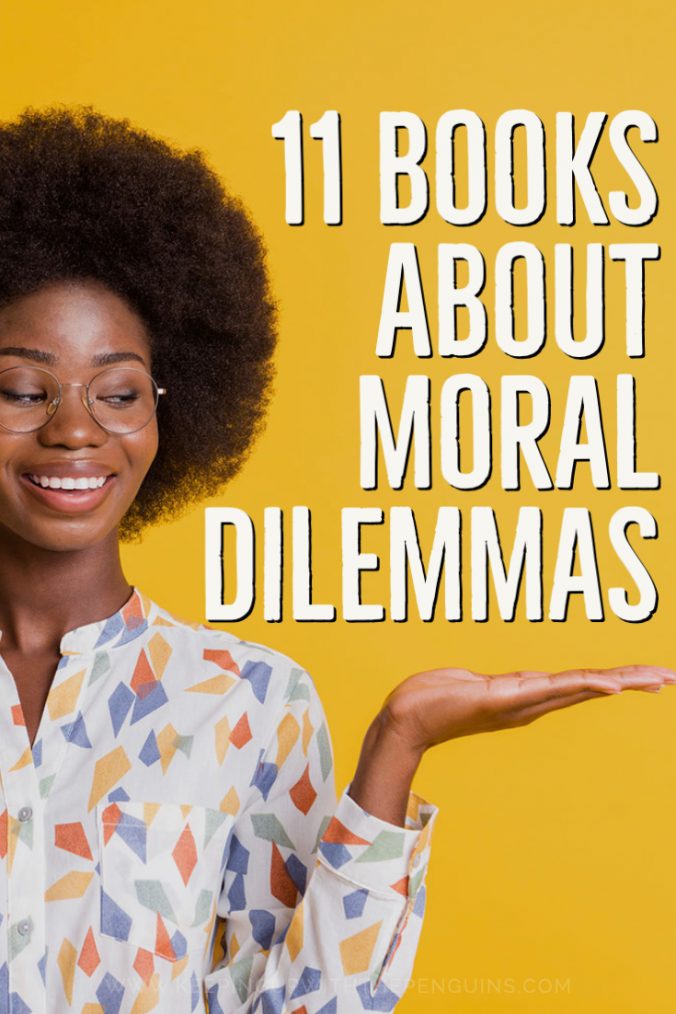 The easiest way to get me to pick up your book is to force me into a brain-bending ethical quagmire. Seriously! Force me to choose between two (or more!) awful outcomes, and I’m in heaven. Put a character through actual hell by crafting a dire no-win situation? Shut up and take my money. Here are eleven of my favourite books about moral dilemmas.

My Sister’s Keeper by Jodi Picoult

Pretty much every Jodi Picoult book has a moral dilemma at its heart. It’s kind of her schtick. But My Sister’s Keeper is the one for which she’s most famous. This best-seller speaks to family, autonomy, law, and obligation. Anna is a 13-year-old girl who was conceived by her parents as a genetic match for her terminally ill older sister. Basically, they want to farm her body for parts in the hopes of a cure for Kate. Anna turns the tables on them by suing for medical emancipation. There’s no winning here: if Anna loses the case, she’ll be forced to donate organs and cells in perpetuity (or until Kate dies, or until she turns eighteen), but if she wins, a thirteen-year-old will get to decide whether her sister lives. Read my full review of My Sister’s Keeper here.

A young, newly-married black man is falsely accused of a horrible crime, found guilty and sent to jail. No dilemma there, obviously it’s a hideous miscarriage of justice. That’s where Tayari Jones is brilliant: she leads us to look, instead, at the choice facing his wife. In An American Marriage, Celestial must navigate the murky waters of her marriage during her husband’s incarceration. Is she obliged to wait for him for over a decade, putting her life on hold, until he is released? Or should she be free to seek comfort, joy, and companionship elsewhere? The mind-bending moral dilemmas in this book will bounce around in your head for hours. Read my full review of An American Marriage here.

The Husband’s Secret by Liane Moriarty

The Husband’s Secret is one of those books that stacks moral dilemmas on moral dilemmas – which really gets my motor running! First, Cecilia finds a letter buried in a long-forgotten box. The envelope reads, in her husband’s handwriting: “For my wife, only to be opened in the event of my death”. So, should she open it? This is a Liane Moriarty book, of course she does. The contents of the envelope reveal that he murdered his girlfriend when he was seventeen. This is the proverbial cat among the pigeons, to be sure! Should Cecilia dob her husband in? What will his inevitable incarceration and public shaming mean for her kids? Are some secrets better left buried? Read my full review of The Husband’s Secret here.

Little Fires Everywhere is what you should reach for when you want books about moral dilemmas that are every bit as compelling as a high-octane thriller but every bit as literary as a dusty classic. It interrogates many of the ethical pitfalls of motherhood, and it makes for a very emotive read. Does biology or bond make a mother? What should we do when those competing claims collide? Plus, Ng deftly weaves race into the equation: do white, affluent adoptive parents exploit their privilege in taking children from women of colour? It’s an issue novel, but one that doesn’t beat you over the head with a foregone moral position, a best-seller that actually lives up to the hype. Read my full review of Little Fires Everywhere here.

As far as books about moral dilemmas go, The Time Traveler’s Wife is a strange one – if only for the fact that the moral dilemma is sure to be explored far more thoroughly by the reader than by any of the characters. It boils down to the question of free will. Henry is a mature (well, adult) man when he travels through time and encounters Clare, a child with all the accompanying credulity. He tells her they will fall in love and marry when she grows up. So, does she have a choice in the matter? Has Henry robbed her of her agency? The time travel element will stretch your thinking meat a bit, but it’s a fun thought exercise all the same.

If you found out your sibling had murdered someone, would you dob them in? Or would you help them hide the body? What about if it was multiple someones? What if they had their sights set on your workplace crush next? All of these moral dilemmas – and more! – are tackled in Oyinkan Braithwaite’s debut novel, My Sister, The Serial Killer. Korede is a nurse who finds herself in the unenviable situation of scrubbing the blood of her sister’s victims off the floor. Braithwaite demonstrates a talent for writing far beyond her years and experience, and this clever mix of crime, romance, and family saga belies her early-career status. Read my full review of My Sister, The Serial Killer here.

Time And Tide In Sarajevo by Bronwyn Birdsall

The moral dilemma in Time And Tide In Sarajevo is compounded by generations of conflict, trauma, and politics in the Balkans. Evelyn has been teaching English to scholarship students in Sarajevo for a couple of years, and she’s made the best friends she’s ever had in the strange yet welcoming city. All of that shifts when a teenage boy is murdered in the streets, and Evelyn comes into possession of video evidence of the crime. Should she release the footage, regardless of the wider ramifications for safety in the city? Or should she let tensions simmer down, respect her position as an outsider and let a murderer walk free?

Remember Me by Charity Norman

Are some secrets best left buried? That’s the question at the heart of Charity Norman’s novel, Remember Me. Leah Patara vanished off the face of the earth. That was twenty-five years ago, but new clues about the fate of the missing woman are coming from an unlikely source. Emily Kirkland’s father is descending into Alzheimer’s and through the mists of his failing memory, he reveals he might know what happened to Leah. But does Emily really want to know? What should she do – what can she do – with information that might prove her father is a murderer? Can there be justice when the man who used to be her father has all but disappeared? Read my full review of Remember Me here.

Okay, imagine this: you leave your husband in your hotel room when you pop out for an afternoon stroll. You stumble across a rock that seems to be making a funny noise, and as you approach it… whoosh! You’re pulled back through time, two hundred years, into a situation scarier and stranger than any you’ve ever known. All that happens to Claire Beauchamp in the first hundred pages of Outlander. Where’s the moral dilemma, you might be wondering? Well, in order to keep herself safe in the Scottish Highlands, Englishwoman Claire must marry one of the clansmen. Can she ethically marry another man – fall in love with him, even – when she’s already married? Even if her husband won’t be born for another couple of hundred years? Read my full review of Outlander here.

If Cats Disappeared From The World by Genki Kawamura

A young man, estranged from his family and living alone with his cat, is rocked to the core by a terminal diagnosis from his doctor. That is, until the Devil appears to offer him a Faustian pact of sorts. The narrator can live one extra day, in exchange for making something else disappear from the earth forever. And thus, the moral dilemma at the heart of If Cats Disappeared From The World is unveiled. What makes life worth living? What are you willing to exchange for twenty-four more hours? Over the course of just one week, this young man has to reckon with the deepest questions about what our lives are worth, and what we owe to each other.

The Children Act by Ian McEwan

In The Children Act, a High Court judge is called to rule on the case of a 17-year-old boy refusing life-saving medical treatment on religious grounds. As far as books about moral dilemmas go, that’s a slam dunk! The boy, Adam, and his family are Jehovah’s Witnesses, which means no blood products. They refuse to consent to a transfusion for Adam, despite the fact that doing so will cause his death. If Adam were legally an adult, there wouldn’t be anything his doctors could do to contest the decision, but seeing as he’s a few months shy of his 18th birthday, they appeal to the Family Court, putting the decision in one judge’s hands. Read my full review of The Children Act here.