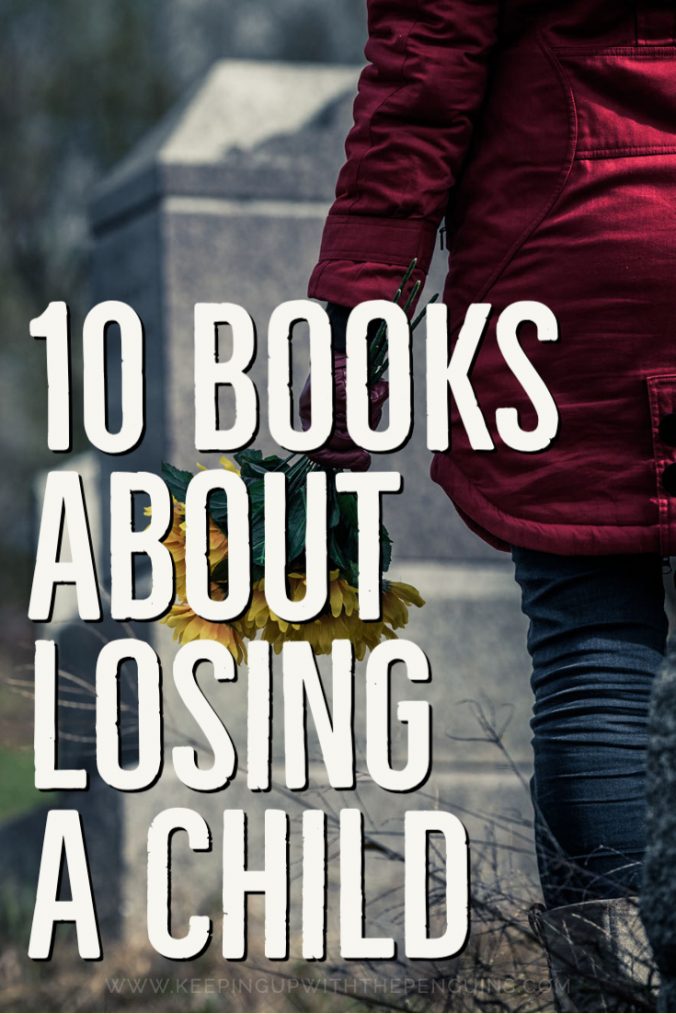 A parent should never have to bury a child. It’s a unique kind of pain, one that goes against the natural order. My heart breaks for any parent who has had to endure this kind of grief. I was surprised to realise, however, how few books have been written about this horrific experience. Here are the books about losing a child that I was able to track down.

Lincoln In The Bardo by George Saunders

George Saunders was inspired to write Lincoln In The Bardo after hearing stories about how Abraham Lincoln would sit in the crypt of his son, Willie, to talk to the boy and hold his remains. While the stories, it would seem now, are largely apocryphal, but it’s a powerful image nonetheless. The book itself is highly experimental, set in the “bardo” (a Tibetan term for the Buddhist ‘intermediate state’ between death and reincarnation) and narrated by dozens of voices.

Beth is probably remembered by most readers as the weaker, sickly sister who died tragically young in Little Women – but we’d best not forget that she was a daughter, too. Marmee raced home to her daughter, and did everything she could to nurse her back to health, but sadly Beth succumbed (sorry, spoiler – for a hundred and fifty-year-old book) to scarlet fever. Compounding the tragedy, she contracted the illness while charitably helping an indigent local family. The family’s grief reverberates through the remainder of Little Women, Marmee and Jo’s grief especially. Read my full review of Little Women here.

Remember Me by Charity Norman

The central mystery of Remember Me is the fate of local girl Leah Patara, a young woman who went hiking alone and was never seen again (“not a boot, not a backpack, not a turquoise beanie… she vanished off the face of the earth”). While the main focus of the plot is her childhood friend’s fear that her father may have had something to do with Leah’s disappearance, Norman also offers us a richly woven sub-plot regarding Leah’s mother, and how her life changed course after her daughter vanished. It’s commendably done, with a resolution that both hurts and heals. Read my full review of Remember Me here.

Everyone loves Isabel Allende’s magical realism and historical fiction, but Paula is her most raw and revealing work. It’s a memoir about the “darkest experience of her life”, written by the deathbed of her daughter Paula Frías Allende (for whom the book is named). Paula fell into a porphyria-induced coma in 1991, and died the following year. Allende initially began writing as a letter to Paula, explaining what she had missed while she was ill, but as it became clear that Paula would not recover, Allende began to weave in stories of her own life and that of her fiction.

As impossible it is to imagine losing a child, it’s even beyond that to imagine losing a child at your own hand. And yet, that’s the horrifyingly sad circumstance of Sethe, the central character of Toni Morrison’s Beloved. Based on the equally horrifying true story of Margaret Garner, Sethe was forced to kill her infant daughter – the only alternative being allowing the child to be abducted into a life of slavery. Sethe’s daughter returns to her in the form of a haunting, a metaphor for the inheritance of trauma as a result of the slave trade. Read my full review of Beloved here.

Everything I Never Told You by Celeste Ng

On the surface, the middle-class suburban life of the Lee family looks pretty perfect. Working father, homemaker mother, three growing children who appear to be (mostly) happy and healthy. The death of the middle child, favoured daughter Lydia, exposes the cracks in the facade. Everything I Never Told You is a dark but compellingly readable novel, not exactly a murder mystery but not-not that, either. Ng explores everything we inherit from our parents, their hopes and fears, their triumphs and disappointments, and how what remains unspoken can do the most damage of all. Read my full review of Everything I Never Told You here.

Booth is widely marketed and read as a novelisation of the life of John Wilkes Booth, the man who assassinated Abraham Lincoln. You’ll find upon closer inspection, however, that it’s actually an intimate portrait of the whole Booth family – and the impact that the loss of multiple children had on the Booth parents and siblings. Four of the ten Booth children die in infancy, and still others meet their ends in adulthood, when they should be “safe” from the ravages of childhood accidents and illness. It’s a heart-wrenching reminder of the reality of family life in the late 1800s. Read my full review of Booth here.

The Breeding Season by Amanda Niehaus

I always worry that The Breeding Season will be pigeonholed as “women’s” literature (vomit), because it deals with the grief of losing a child and relationship rifts. Let me tell you, it investigates the male role and experience just as much as the female one—it just so happens that the author is a woman. It is a story of all-encompassing grief, intensely poetic and full of natural imagery and metaphor. Niehaus brings together all kinds of binaries: art and science, grief and hope, birth and death. Read my full review of The Breeding Season here.

Joan Didion is perhaps best known for The Year Of Magical Thinking, her account of experiencing grief in the wake of her husband’s (very) sudden death. What few readers realise, however, is that shortly after losing the man she loved, Didion lost her daughter as well. She doesn’t offer hope or revelation in Blue Nights – you’ll find no cliches or trite affirmations here. Instead, she permits us a glimpse into her own nihilistic state of mind, speechless rage at the unfairness of death, and in so doing gives us permission to truly feel the depths of our own pain.

The Little Prince is a must-read, for any one of any age grieving any kind of loss, though it might have particularly special resonance for adults grieving the loss of a child. It’s a story told in the format of a children’s book, complete with beautiful illustrations, but it’s wonderfully complex and incredibly poignant. The story revolves around a young boy, a “prince” of his home planet, who winds up on Earth in the company of a pilot whose plane has crashed in the desert. This one will warm your heart, but you’ll also sob – bring tissues. Read my full review of The Little Prince here.

Everything I Never Told You – Celeste Ng