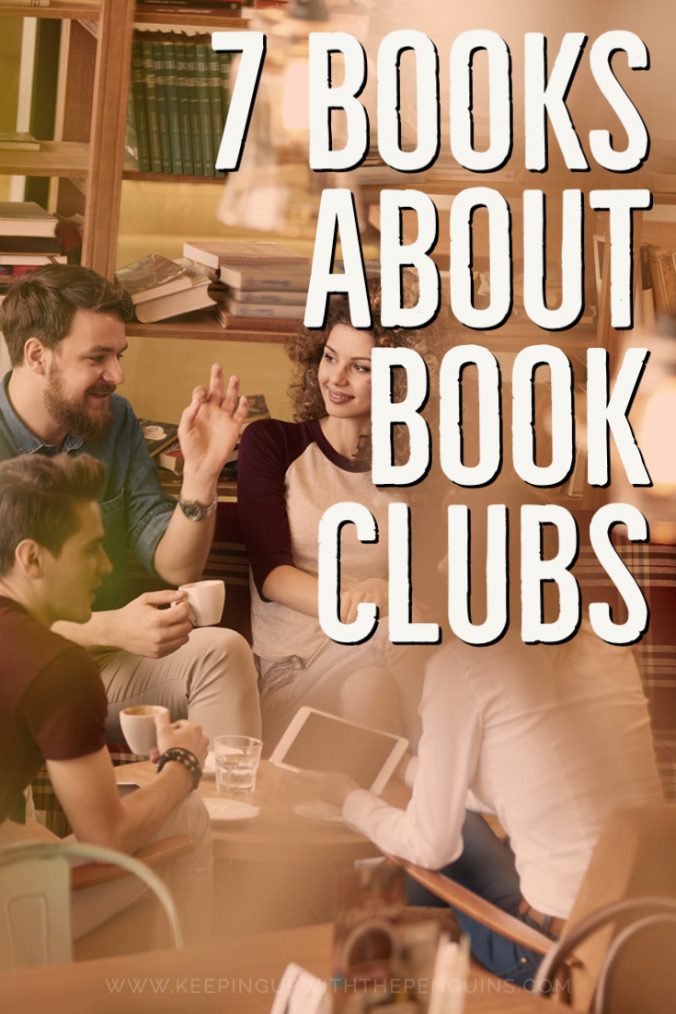 Book clubs are marvellous things. People getting together to talk about what they’re reading is amazing in itself, but these conversations have led to sexual revolutions, legislative overhauls, and all manner of social change. Given how much writers love reading, and how many of them belong to book clubs (or run their own!), it’s not surprising that book clubs have featured in some of their novels. Here are seven books about book clubs.

The Guernsey Literary And Potato Peel Pie Society began on the small and unassuming English Channel island of Guernsey, when its residents found themselves in need of an alibi. They were busted breaking curfew by German soldiers during the darkest days of the WWII occupation, and they needed a reasonable excuse. But despite this spurious beginning, the society became a beacon for the eccentric literature lovers of the island, and years later – when the war is over – writer Juliet Ashton finds herself drawn into their story.

Most books about book clubs are fiction, but this one is something special. Reading Lolita In Tehran is a memoir by Iranian academic Azar Nafisi. She taught Western literature in Tehran in the mid-90s (a particularly fraught career choice in a notoriously troubled part of the world). After resigning from her university job, she started a book club with seven of her best and most committed students – all women. In her living room, every Thursday morning, they would meet to discuss great works of Western literature. Her story offers “a rare glimpse, from the inside, of women’s lives in revolutionary Iran”. Read my full review of Reading Lolita In Tehran here.

You won’t find a hook more delightful in books about book clubs than that to be found in The Southern Book Club’s Guide To Slaying Vampires. Patricia Campbell’s book club is the bright spot in her otherwise drab life. She gathers with other true crime-obsessed Charleston women to talk everything from Bundy to Manson, but little do they all know that a far creepier crime is going to unfold in their very own suburb. Patricia is the first to notice something strange about her neighbour’s nephew, but he’s already insinuated himself into her life. Hendrix is at his best in this sharp story about neighbourly kindness gone wrong.

Some book clubs (and, as you’ll see, books about book clubs) work because they hang on a theme. You get no prizes for guessing that in The Jane Austen Book Club, six people gather to read and discuss the works of Jane Austen, though. As obvious as the premise might seem, Karen Joy Fowler has plenty of surprises for you in this brilliant, insightful story. Each section focuses on one of the book club members, whose lives have strange echoes of the experiences of Austen’s protagonists. It’s a beautifully drawn parallel, and Austen fans will delight in this contemporary take.

Most books about book clubs focus on women – which is why The Bromance Book Club was such a breath of fresh air. “The first rule of book club: You don’t talk about book club.” Baseball player Gavin Scott tumbles head-first into a crisis of confidence when he finds out his wife is divorcing him. Turns out, she’s been faking her orgasms for the entire duration of their marriage. Ouch! In a last-ditch effort to save their relationship (and ignite their sex life), he joins Nashville’s all-alpha-male romance book club. Will the wisdom of Courting The Countess help Gavin unleash his inner Fabio?

Never Have I Ever by Joshilyn Jackson

Amy Whey hosts a monthly book club in her quiet neighbourhood of Pensacola, Florida. She’s exactly what you’d expect in a “suburban mom” protagonist, and she loves her sweet-and-wholesome family more than anything. Her perfectly normal life of simple pleasures is all up-ended, however, when a Cher-lookalike stranger, Roux, shows up to book club, and a modified game of Never Have I Ever opens a can of worms. A far cry from the sweet-as-pie books about book clubs that top best-seller lists, this suspenseful thriller will have you wondering what secrets your fellow readers might be hiding. Read my full review of Never Have I Ever here.

No One Round Here Reads Tolstoy – Mark Hodkinson