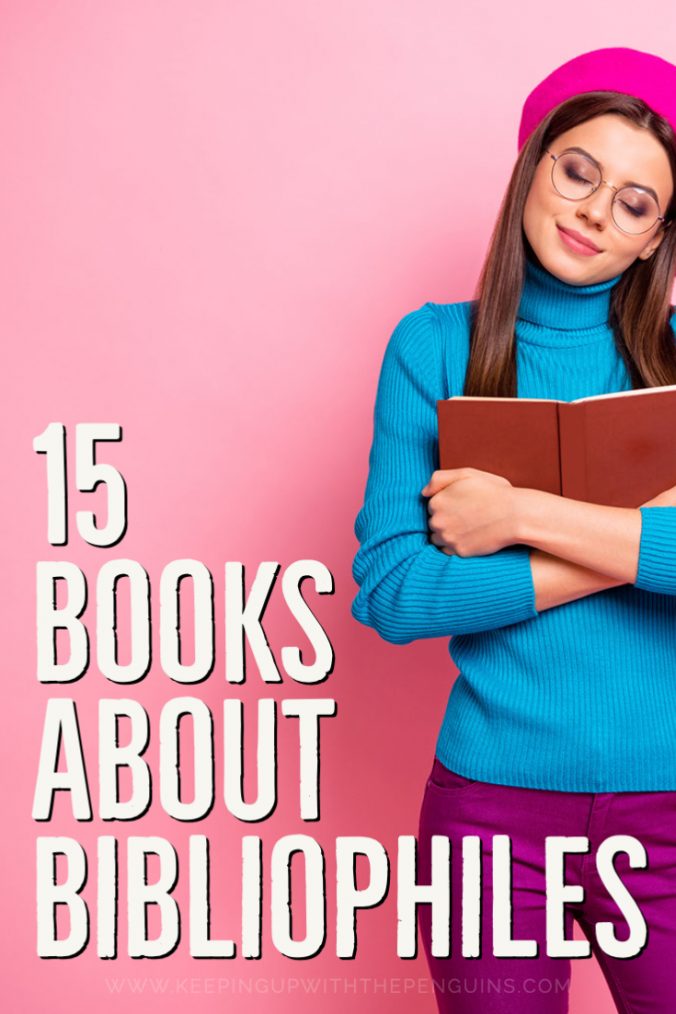 Nothing makes a book-lover feel more seen than a character who loves books just as much as they do. Whether you’re looking for a little reassurance yourself, or a bookish gift for a loved one, here are fifteen great books about bibliophiles.

For many book lovers, Matilda is one of the first books about bibliophiles that they remember reading. The young, neglected girl who finds her superpowers after reading her way through literally every book in the library? Yes, please! Roald Dahl, for all his faults, definitely understood the assignment. What better way to get young bookworms on-side than give them the bookish heroine they need? Plus, we get to experience the joy again and again, with the film, the musical, and a whole new generation of readers discovering the joy.

For the young adult set, Fangirl has become one of the iconic books about bibliophiles, beloved by bookstagrammers and booktok-ers around the world. Even though some of Rainbow Rowell’s other works have been called out as problematic, this one still seems to have a special place in many readers’ hearts. It mirrors much of the millennial experience (and that of subsequent generations), with a particular book or series capturing the heart, finding a community of others who like it online, and becoming an architect of the stories you love yourself. Read my full review of Fangirl here.

Paris is for book lovers. With Shakespeare & Co, literary salons, and a rich history as a haven for controversial and explicit writing, it’s the logical setting for books about bibliophiles. The Little Paris Bookshop is one such tome, the story of the city’s (sadly, fictional) ‘literary apothecary’. Monsieur Perdu can prescribe a book to heal any pain or problem… except his own. For years, he’s been dispensing paperback cures from his floating book shop on the Seine, but one inciting incident will see him finally pursuing a cure for his own broken heart.

A 24-hour bookstore sounds amazing, doesn’t it? Imagine being able to browse the shelves when a bout of insomnia hits, or stop in to treat yourself after a tough night shift… but as book lovers who have read Mr Penumbra’s 24-Hour Bookstore know, there’s more to this brilliant small business than meets the eye. That’s what the protagonist discovers, too, when he starts working there after losing his schmick job as a software developer. The bibliophiles who enter the store aren’t shopping for books, and the man who runs it is hiding one heck of a secret behind his love of literature.

We all know the refrain: books bring people together. That’s definitely true in The Reading List, where a miscellaneous random list of books brings together two people as different as you could imagine. A nervous teenager working the desk at her local library finds the list in the back of a copy of To Kill A Mockingbird, and – on a whim – decides to read her way through it. When Mukesh comes to the library, searching for a way to connect with his granddaughter, she passes on the list. The two form an unlikely friendship, making for one of the most wonderful heart-warming books about bibliophiles.

Books about bibliophiles have been around almost as long as books themselves. Miguel de Cervantes’ epic story Don Quixote, now a classic of the Spanish canon, was first published back in 1605. It’s still beloved by bookworms everywhere, even though it’s somewhat of a cautionary tale. The main character is a man so immersed in the fictional worlds of his romance novels that he confuses them with reality. Delusional, but happy, he roams the countryside getting into all kinds of misadventures, in pursuit of (naturally) a fair maiden. Read my full review of Don Quixote here.

A Tree Grows In Brooklyn by Betty Smith

Think of A Tree Grows In Brooklyn like a more realistic Matilda for grown-ups, one of the classic books about bibliophiles for adults. The protagonist, like Matilda, is young, and she’s off to a rough start in life. Francie Nolan is growing up in the Williamsburg slum, with an alcoholic father and a family life that isn’t entirely stable. Still, between the bleak days there’s opportunities for joy, not the least of which is that which Francie finds in books and education. She’s determined to overcome her humble origins, and someday complete her tertiary education – you can take the girl out of Brooklyn, but can you ever take Brooklyn out of the girl?

The protagonist of Fahrenheit 451, fireman Guy Montag, doesn’t start the story as a bibliophile. In fact, quite the opposite: his job is to burn any and all books, and the houses where they’ve been hoarded. But Guy starts to wonder: what is it about these paperbacks that has people risking their lives and safety to save them? So, he takes one, and he discovers what so many of us find so intoxicating about the written word. Of course, Bradbury’s dystopia is truly terrifying to real-life book lovers, but if you can look past the fear, it’s still a testament to the power of literature. Read my full review of Fahrenheit 451 here.

How To Find Love In A Bookshop by Veronica Henry

Nightingale Books is a cozy haven for the bibliophiles of the small village in which it stands. The owner, Emilia, is fighting tooth and nail to keep it open in the wake of her beloved father’s passing – but it might be a losing battle. The simple love of books isn’t enough to stay afloat. In How To Find Love In A Bookshop, a cast of characters will win your heart the way they won Emilia’s. The enterprising restaurateur who has a crush on the man in the cookbook section, the wealthy landowner who desperately needs an escape, the rake who misses the son he lost along with his marriage – will they give Emilia the strength to keep Nightingale Books open?

The Elegance Of The Hedgehog by Muriel Barbery

Not all book lovers are out and proud. In The Elegance Of The Hedgehog – another one of these books about bibliophiles set in Paris – the unassuming concierge of a swanky apartment building keeps her love of literature, philosophy, and fine art under wraps. She fears the judgement and intrusion of her building’s residents if they knew, instead of watching trash TV and eating junk food in her home office, she was reading Tolstoy and listening to Beethoven. This fear stems from an event in her childhood, one that taught her having ideas above her station would lead to trouble. Still, her self-education rivals that you might receive at the Sorbonne. Read my full review of The Elegance Of The Hedgehog here.

The Diary Of A Bookseller by Shaun Bythell

Running a book store seems like the logical occupation for a bibliophile, doesn’t it? Look at all the characters on this list of books about bibliophiles who do just that. But Shaun Bythell quickly learned, upon taking over The Bookshop in Wigtown, Scotland, that the fictional dream is very different to the reality. In The Diary Of A Bookseller, he shows us what bookselling is really like, warts and all. Eccentric customers, bizarre requests, oddball staff, thrilling buying expeditions… if you’ve ever wanted to know about life behind the desk of your local book store, this is the memoir you need to read.

The Perks Of Being A Wallflower by Stephen Chbosky

Charlie, the titular wallflower in Stephen Chbosky’s coming-of-age cult classic, has already lived through a lifetime’s worth of angst. He lost his best friend to suicide, the new friends he found are headed off to college, and his mental health issues (stemming from a traumatic event in his childhood) make it difficult for him to trust his own thoughts. But he does love books, and one of his teachers recognises the value of literature for a kid like Charlie. Over the course of The Perks Of Being A Wallflower, he devours the books his teacher passes to him, one by one, occasionally writing to his ‘friend’ about how they’ve shaped and comforted him. Read my full review of The Perks Of Being A Wallflower here.

Mr Norrell is a bookworm after our own hearts. His knowledge of magic could have incredible applications, but he’s too busy reading up on the history and the theory – not to mention hoarding all the books that other magic enthusiasts would kill to get their hands on – to get around to it. In Jonathan Strange And Mr Norrell, he meets his match in the other titular character, a young, impulsive magician who discovers his power almost by accident and has little time for cantankerous Mr Norrell’s insistence on reading. This is one of the best books about bibliophiles for readers who like their passion infused with a little magic and history. Read my full review of Jonathan Strange And Mr Norrell here.

The Librarian by Salley Vickers

Have you ever dreamed about running away, starting over as a librarian in a small town where nobody knows you? Most bibliophiles have, there’s no shame in it! And that’s the premise of The Librarian, one of the coziest historical fiction books about bibliophiles of recent years. Sylvia Blackwell moves to the quaint English town of East Mole, where she delights in her job as children’s librarian. She promptly falls in love with an older man, but it’s his precocious young daughter – and her neighbour’s young son – that truly capture her heart. Introducing these kids to literature could have bigger and wider ramifications than Sylvia anticipated.

No One Round Here Reads Tolstoy by Mark Hodkinson

Mark Hodkinson grew up in working class heartland, in a house full of bibliophobes (yes, there is such a thing). His family didn’t see “the point” in reading, had only one book in the house, and yet Hodkinson still learned the power of stories. He now has over 3,500 books in his own home, he works with books every day, and he’s written this one. No One Round Here Reads Tolstoy is a memoir about where we come from and why books matter, one of the best non-fiction books about bibliophiles from unlikely origins. Read my full review of No One Round Here Reads Tolstoy here.