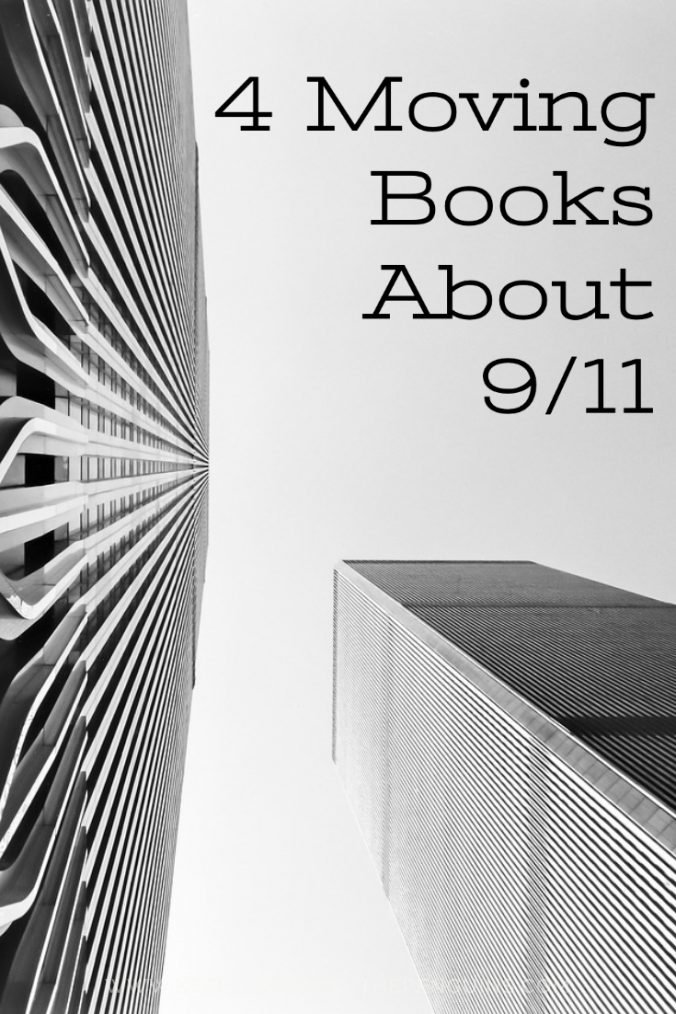 This year marks the twentieth anniversary of the attacks on the Twin Towers in New York, 9/11. Naturally, anniversaries are tough for survivors and those significantly impacted by such events, so my heart goes out to them. It’s also given me cause to look back and think about how we write and read about what happened that day.

I’ve always been of the opinion that we need time and distance from something to write about it in a way that truly resonates (which is why I’ve avoided reading any of the rushed-to-market books about the Trump presidency or coronavirus). Very few books about 9/11, so far, have moved past the informational and into the emotional. Perhaps one day they’ll be as common as historical WWII novels, but for now, here’s a short list of truly moving books about 9/11.

Although Extremely Loud And Incredibly Close doesn’t take place at the time of the 9/11 attacks, the impact of them echoes throughout Foer’s novel. It’s narrated by nine-year-old Oskar, whose father was killed in the attacks one year prior. Oskar discovers a key in the bottom of a vase, presumably once belonging to his father, and he undertakes a quest all across New York City to discover what it unlocks. Oskar is traumatised by the events of 9/11, he experiences depression and insomnia (which he describes as “wearing heavy boots”), and his search for closure made manifest in the key gives him purpose to go on each day. Bring tissues!

Thomas Pynchon isn’t exactly known for his moving prose – heck, he’s not even known for being particularly readable – but Bleeding Edge is a book about 9/11 with an interesting take. Pynchon takes the already-surreal events of that day and transposes them onto a dream-like detective novel, with poignant parallels that continue to resonate even as time goes on. The story follows an ex-certified fraud examiner (from the brilliantly-named agency Nail ‘Em and Tail ‘Em), as she chases down conspirators making the most of the dot-com bubble burst, navigates separation from her ex-husband and manages custody of their two children, all as the threat of 9/11 looms on the horizon.

My Year Of Rest And Relaxation by Ottessa Moshfegh

Normally, books about 9/11 (or, indeed, any tragic event) have a sympathetic narrator at their heart, someone you can root for and cry for. Not so in My Year Of Rest And Relaxation! Moshfegh has created a character so unlikeable that her Goodreads reviews are plagued with complaints. The unnamed narrator – beautiful, rich, entirely self-absorbed – decides, around the time of September 2000, that she’s had enough of the world and she’d like to sleep for an entire year. Sure enough, she locks herself up in her apartment with enough sleeping pills to take down a rhinoceros. She, and the city (well, the world), are in for a rude awakening when she finally emerges.

The Only Plane In The Sky by Garrett M. Graff

This is the only non-fiction book I’ve included in this list of books about 9/11, because it’s the only one I’ve found that has the same emotional arcs and resonance as fiction. Most non-fiction books on this subject are quite dry, I’ve found, but The Only Plane In The Sky – being an oral history – absolutely bleeds humanity and meaning. Graff pulls together hundreds of transcripts and documents to tell the stories of first responders, witnesses, government officials, survivors, and loved ones, painting a comprehensive portrait of the day that changed their lives, and the world. If you’re feeling particularly brave and emotionally stalwart-y, you can listen to the audiobook, which won many best-of awards last year.

@keepingupwiththepenguinsonline
•
Follow
Have you ever dreamed of going off the grid? Escaping somewhere beautiful, with a bunch of likeminded people, and working on yourself away from the stresses and pressures of everyday life? 🏞 Anna Snoekstra’s new novel Out Of Breath is about what happens when that dream turns into a nightmare 😳 The wonderful team at @HarlequinAus were kind enough to send me a copy for review. . On every other page of Out Of Breath, I wanted to shake the main character’s shoulders and shout “You’re in a CULT! Call your Dad!” (Murderinos know what I mean) 🙈 It made for a very compelling and spooky read. Even if psychological thrillers aren’t your thing, you’ll enjoy the rich descriptions of the outback setting, freediving, and the pearl trade. My full review is up on the blog now (link in bio 👆) - 🦪🦪🦪🦪/5 . Where’s your dream off-the-grid escape destination? 🏝🏔🏜 . #OutOfBreath #AnnaSnoekstra #HarlequinBooks
View on Instagram |
1/9

@keepingupwiththepenguinsonline
•
Follow
Wow, No Thank You is a collection of essays about… stuff 🤷‍♀️ Life. Ridiculous jobs. Trying to make friends as an adult. The lost art of making a mix-tape 📼 Living in a place where most people don’t share your politics. Getting your period and bleeding all over the sheets of your Airbnb 🙀 Trying to remember why you ever found nightclubs fun. . Maybe the context of having read Irby’s earlier essay collections or her blog might’ve made Wow, No Thank You even better, but I enjoyed it thoroughly coming in cold. It’s not going to be for everyone, but it sure is for me 😁 My full review is up on the blog now (link in bio 👆) - 🐇🐇🐇🐇/5 . Is your pet named after anyone? I ask because Irby’s cat is named Helen Keller, and my puppy is Fyodor Dogstoyevsky 🐶😼 . #WowNoThankYou #SamanthaIrby #ReadersGonnaRead
View on Instagram |
2/9

@keepingupwiththepenguinsonline
•
Follow
⚠️ WARNING ⚠️ If you pick up Lapvona just because you enjoyed My Year Of Rest And Relaxation and you recognised Moshfegh’s name from that, you’re in for a rude shock 😅 This is a guttural story about the most grim and grotesque aspects of human nature. . It’s masterful and revolting. I’m glad to have read it, and I’m glad that it’s over. I like to think that’s exactly what Moshfegh was going for 😂 My full review is up on the blog now (link in bio 👆) and my endless gratitude to @PenguinBooksAus for sending me a copy for review. 🐑🐑🐑🐑/5 . Are you planning to read this one? Did that review likening it to Shrek sway you either way? 🤪 . #Lapvona #OttessaMoshfegh #PenguinBooks
View on Instagram |
3/9

@keepingupwiththepenguinsonline
•
Follow
For way, way too long, queer love stories in literature were full of misery and ended tragically 😢 Lovers died, or were torn apart by time and circumstance, or were forced to keep their love hidden due to the prevailing social mores. Thankfully, we’re moving on, and allowing queer love stories – real and fictional – to be celebrated, loud and proud 👨‍❤️‍💋‍👨💪👩‍❤️‍💋‍👩 . Over on the blog (link in bio 👆), I’ve put together a list that reflects that. Twelve wonderful queer love stories that you really should pick up before the end of Pride - and some of my favourites are pictured here 📷🌈 . Have you read any great queer love stories this Pride? I’d love to add to the list! 🏳️‍🌈 . #PrideReads #ReadWithPride #PrideBooks
View on Instagram |
4/9

@keepingupwiththepenguinsonline
•
Follow
Red, White & Royal Blue, unbelievably, lives up to the hype 😲 Of course, it’s targeted at younger readers, but I can vouch for the fact that it resonates for young-at-heart readers, too. I’d especially recommend it for fans of The West Wing, and/or anyone who’s just particularly burned out by The State Of The World 🗑🔥 . The only flaw, as far as I could see, was that one of the plot points (re: the emails 💌 no spoilers but IYKYK) was so blatantly foreseeable! I felt like I spent two-thirds of the book waiting for that particular shoe to drop. Hot tip: if you EVER want to keep ANYTHING secret, NEVER put it in writing – especially in a romance novel! 🙈 My full review is up on the blog now (link in bio 👆) - 👨‍❤️‍💋‍👨👨‍❤️‍💋‍👨👨‍❤️‍💋‍👨👨‍❤️‍💋‍👨/5 . Which of Casey McQuiston’s books has been your favourite so far? I enjoyed this one, but it couldn’t quite top One Last Stop 💞 . #RedWhiteAndRoyalBlue #CaseyMcQuiston #PrideReads
View on Instagram |
5/9

@keepingupwiththepenguinsonline
•
Follow
The Strangers is told in five parts, vignettes from five consecutive years in the lives of three generations of Métis women. Margaret is bitter and weary; her daughter, Elise, is addicted and broken; Elise’s eldest daughter, Phoenix, is angry and incarcerated; and Cedar, Phoenix’s younger sister, is lonely and confused. This is a story of inherited trauma and matrilineal bonds, an incredible First Nations novel from Katherena Vermette. . Despite the (very) heavy subject matter, and Vermette’s talent for stark realism, The Strangers is surprisingly readable. The pages fly by! It really exceeded my expectations, and I’m still mulling over it days later. My gratitude to Vermette and the team at @UQPBooks for sending a copy! ♾♾♾♾♾/5 (and my full review is up on the blog now, link in bio 👆) . What was the last book about Hard Stuff that you found surprisingly easy to read? 🤔 . #TheStrangers #KatherenaVermette #UQPBooks
View on Instagram |
6/9

@keepingupwiththepenguinsonline
•
Follow
For about as long as we’ve been making up stories about other people, we’ve been telling our own stories, too 🗣 There are two main book genres for people writing about their own lives: autobiography and memoir. It’s easy to smush these two categories together, but they’re actually quite distinct… most of the time 🤔 . Over on the blog (link in bio 👆) I’ve put together a guide to the difference between autobiography and memoir - and all the exceptions to the rules 🤓📚 Check it out if you want to sound like you know what you’re talking about, in this regard at least 😏 . What are your favourite autobiographies/memoirs? I want more recommendations! 👇 . #Autobiography #Memoir #BookStack
View on Instagram |
7/9

@keepingupwiththepenguinsonline
•
Follow
My first literal lol came from Calypso‘s blurb. After promising that “Sedaris sets his formidable powers of observation towards middle age and mortality”, it reveals that he named his beach house the *Sea Section* - HA! 🤣 . Sedaris’s essay collections always revolve around a rough theme or motif. With Calypso, he focuses on middle-age and the changing shape of his family. Even though the content is a bit darker in parts, he still writes with the humour and panache that makes him unique. It’s impossible not to be impressed by his mastery of the form, the way in which he can punch in any direction and still manage to remain thoroughly likeable and hilarious. Full review is up on the blog (link in bio, etc etc) - 🏖🏖🏖🏖🏖/5 . What would you name your getaway beach house, if you had one? Bonus points for terrible puns! 😝 . #Calypso #DavidSedaris #PrideReads
View on Instagram |
8/9

@keepingupwiththepenguinsonline
•
Follow
Bone Memories is the immersive new Australian novel that examines the repercussions of a terrible crime, across three generations of a family. The wonderful team at @UQPBooks were kind enough to send me a copy for review 💌 . The first thing that struck me is that, even though Jess’s murder is unsolved, Bone Memories isn’t about the search for her killer. The crime doesn’t propel the story, which makes for a nice change! My allegiances shifted, several times, as it all played out. Hyper-sensitive Billie, conflicted Daniel, and frustrated Carla are all relatable in different ways. Readers of Australian literary fiction and family dramas will really enjoy this one! My full review is up on the blog now (link in bio 👆) - 🦴🦴🦴🦴/5 . #BoneMemories #SallyPiper #UQPBooks
View on Instagram |
9/9