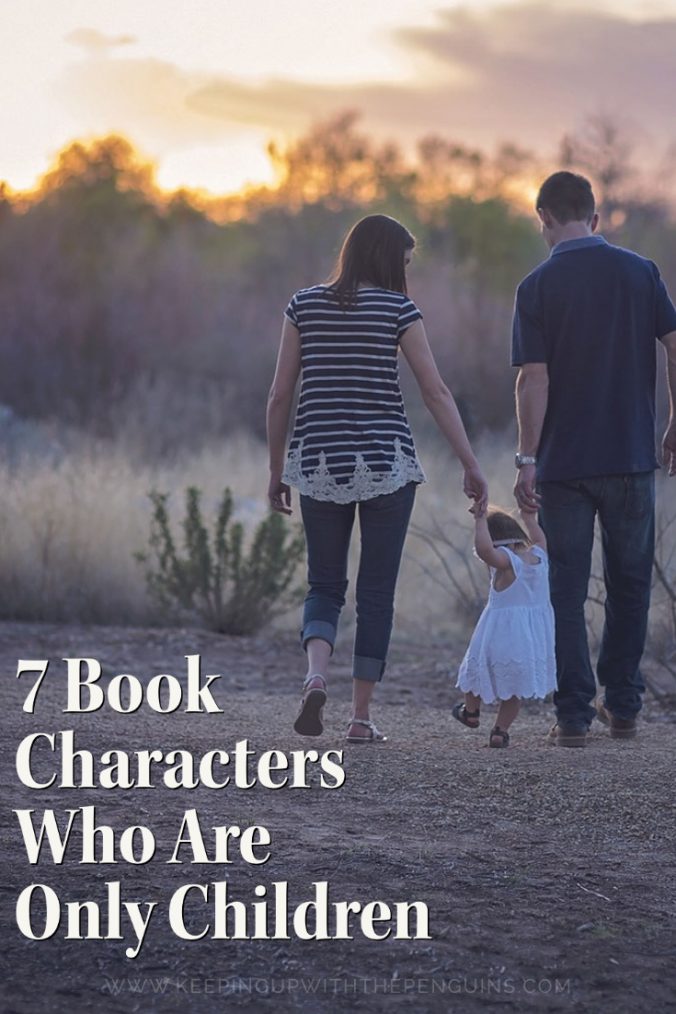 7 Book Characters Who Are Only Children

After my post on siblings in literature, one of my amazing Keeper Upperers (looking at you, Paula Vince!) suggested I do a similar round-up of only children in literature. I’m an only child myself, but for some reason it’s rare that I see my experience actually reflected in the books I read. I had to dig pretty deep in my Goodreads history, but eventually I managed to dust off seven book characters who are only children.

From Lanny by Max Porter

The titular character of Max Porter’s sophomore novel, Lanny, is an every-child, with all the oddity and gnomic wisdom we expect from these miniature humans. He’s curious, he’s tactile, and it’s through his keen intuition and active imagination this bizarre story comes to life. He is characterised through the eyes of the grown-ups in the story as idiosyncratic, silly, and sometimes wise beyond his years. He builds things, talks to trees, and baffles just about every grown-up he encounters. His lack of siblings doesn’t seem to do him any harm at all. Read my full review of Lanny here.

From The Helpline by Katherine Collette

The fact that she’s an only child is probably the least interesting thing about the main character of The Helpline, Germaine. Germaine is in her late thirties, she’s very good with numbers, she loves Soduku (more than most people), and she very recently lost her job as senior mathematician at Wallace Insurance. Her mother, Sharon, is hardly the nurturing type, and full of useless suggestions, which is why Germaine makes a point of seeing her as little as possible. In fact, she avoids most people. She’d rather be analysing spreadsheet data than engaging in pointless conversation. Read my full review of The Helpline here.

From Bridgerton: The Duke And I by Julia Quinn

The fact that Bridgerton‘s titular Duke, Simon, is an only child is actually a central facet of his character. His mother died due to complications of childbirth, and his father, while chuffed at first to have a son (i.e., heir), was an abusive son-of-a-bitch. So terrible was his treatment of Simon that our hero decided early in his life never to marry or bear a son of his own. In the absence of any brothers to sire offspring, the Hastings name and title would die with him. The plan was working perfectly, until he met the beautiful and feisty Daphne Bridgerton… Read my full review of Bridgerton: The Duke And I here.

Pearl is the teenage daughter of Mia, single mother and artist, in Celeste Ng’s Little Fires Everywhere. The circumstances of her conception and birth are unusual (to say any more would be spoiler-y, sorry!), and her life follows that same pattern. She and her mother are closely bonded, and nomadic; often, they pick up sticks and shift to a brand new town with only each other for company and support. Fun fact: she is named for Pearl from The Scarlet Letter, also an only child born to strange circumstances, and Ng mentions this specifically as part of Mia’s backstory. But Hawthorne’s Pearl was an annoying little shit, so I prefer Ng’s version. Read my full review of Little Fires Everywhere here.

Fifteen-year-old Christopher sees the world differently to most people. When his neighbour’s dog dies (sob!) under mysterious circumstances, he decides to set about an investigation and record it in the style of his favourite detective novels – thus, The Curious Incident Of The Dog In The Night-Time. His family circumstances are far from ideal, he’s far closer to his school support worker than he is to either of his parents, and perhaps a sibling might have helped him manage his various challenges in a more effective way. That said, he does alright on his own. Read my full review of The Curious Incident Of The Dog In The Night-Time.

From The Fault In Our Stars by John Green

It’s hard to blame the parents of The Fault In Our Stars for not expanding their brood past their only child, Hazel – she, and they, have had a tough row to hoe. Hazel lives with cancer, has come close to dying and, if the experimental treatment that has recently stabilised her doesn’t work long-term, she’ll topple over the edge sooner rather than later. It’s every parent’s worst nightmare, but hers seem to (mostly) handle it with grace. They allow Hazel her freedom, letting her jet across the world with her boyfriend to make a wish come true even, so that she can make the most of what life she has left. Read my full review of The Fault In Our Stars here.

The dramas of the kindergartners in Big Little Lies are kind of overshadowed by all the stuff their parents have going on… but Ziggy, the son of young single mother Jane, seems to be a good egg. He cops it when he’s wrongly accused of bullying, but stands his ground to keep his friend’s secret (the true identity of the bully), even when it makes his life difficult. If he had an older sister or brother, maybe they could have looked out for him, but Ziggy forges ahead and makes a family of his own out of very close friends – as many only children do. Read my full review of Big Little Lies here.

The Other Side Of Beautiful – Kim Lock