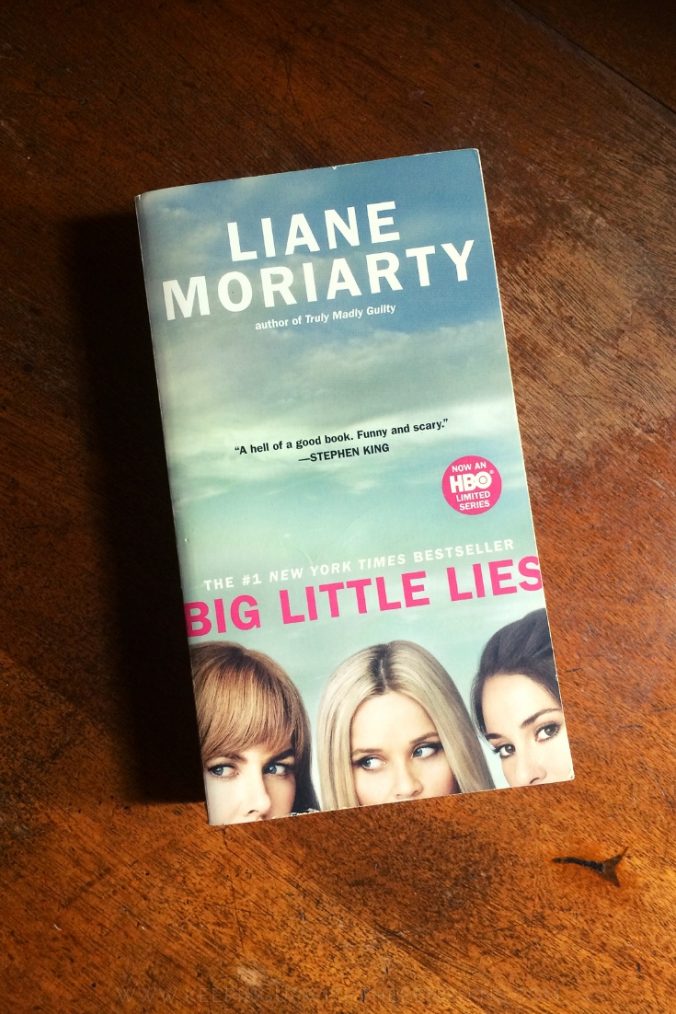 Even when I’m working my way through a set reading list, I’m still, at my core, a mood reader. When I’m down, I want a book that’s going to cheer me up. When I’m on top of the world, I want a book that’s going to challenge me. And after Ulysses, I was in the mood for some F.U.N. I didn’t want anything literary or high-minded or complex – I wanted a page-turner, dammit, and I wanted it NOW! So, where to turn but to Liane Moriarty’s ubiquitous smash hit, Big Little Lies? I was worried that I was the last person left in the world who hadn’t read this book. Honestly, how I managed to avoid any spoilers is beyond me… (this review is going to be chock-full of them, by the way, so if it turns out I wasn’t in fact the last person ever to read it, you might want to look away now.)

I had some idea of what I was getting into: I read and reviewed Moriarty’s fifth novel, The Husband’s Secret, last year. Big Little Lies, published in 2014, was her follow-up. It looks like she knew she’d stumbled onto a winning formula (three women-centric stories woven together in a domestic-thriller-type set-up), and figured she’d stick with it. Good call, on her part!

So, let’s meet the ladies. We’ve got Jane, the single mother who moves to Sydney’s Northern Beaches with her son, Ziggy. She enrolls him at the local Pirriwee Public School (entirely fictional, for those of you playing overseas). There, she meets Madeline, who has a daughter Ziggy’s age, and Celeste, who has twin boys that age, too. The three of them strike up a friendship – more of an alliance, really, to protect themselves in the political battles with other factions of school mums.

Each of them, naturally, has their own set of problems. Jane is dealing with the aftermath of the sexual assault in which Ziggy was conceived. Madeline is hella jealous that her teenage daughter from a previous marriage is growing close to her ex-husband’s new hippie wife, Bonnie. Celeste’s relationship with her wealthy, charismatic husband, Perry, is abusive and toxic (to say the least). So, clearly, it’s massive trigger warnings all ’round, for all types of violence against women (even sex slavery gets a look in, via the passion project of Madeline’s teenage daughter). The point, it seems, is that men are garbage – but at least the women in Big Little Lies have more agency than any of the women in The Husband’s Secret. It’s a far more enjoyable read for that reason alone!


As the story unfolds, each chapter is punctuated with extracts from witness interviews with a journalist, just to keep the lure dangling and really exaggerate the characterisation. See, something went down at a school trivia night, someone is dead, and these little snippets are like banner ads from Moriarty every few pages: SUBURBIA IS A LIE! SOMEONE WAS MURDERED! DON’T YOU WANT TO KNOW WHO, AND HOW? KEEP READING! It’s not subtle. I must say, I heaved a sigh of relief when she revealed, about a hundred pages in, that it was a parent who died; I mean, that’s not great news, but at least we were spared any particularly-gruesome child murders.

After the three women have grown quite close, Jane reveals the details of the sexual assault that’s got her all messed up. She says the man’s name was Saxon Banks. That raises a red flag for Celeste and Madeline, because that’s the name of Perry’s cousin. Celeste actually knows him, from family barbecues and whatnot. They decide to keep that little nugget of information to themselves, though, right until the very end. Perry also busts Celeste setting up her own apartment, and figures out that she’s planning to leave him – if you know anything at all about domestic violence, you know that this is Bad News. His violence towards her escalates accordingly.

And let’s not forget all the kiddie drama that’s playing out at the same time! Ziggy is accused of bullying another child at Pirriwee, and the mothers tear one another apart like lionesses fighting over a warthog carcass. It takes a while, but eventually Jane and Celeste work out that it’s actually one of Celeste’s sons doing the bullying, apparently taking after his violent father.

It all comes to a head at the Pirriwee Public Trivia Night fundraiser. All the parents get together, get drunk, and the titular big little lies come unravelled. This is what all the witness statements have been hinting at throughout the book. Perry is revealed to be Jane’s rapist; he used his cousin’s name, the way he used to as a kid, to get out of trouble. When Celeste calls him out (“hello, excuse me, yes, you’re the absolute worst”), he backhands her. Unbeknownst to him, Bonnie – remember her? Madeline’s ex-husband’s new hippie wife – was the child of a violent relationship, and seeing Perry hit Celeste causes her to freak the fuck out. She ends up pushing Perry over the balcony, to his death.


Yes, it’s all a little neat, a little convenient, but I still thoroughly enjoyed it. I much preferred the structure of Big Little Lies to The Husband’s Secret. The relationships between characters seemed much clearer (if you’re struggling to follow in this review, the fault is entirely mine!), as did the chronology of events. It was just a far better effort overall. Moriarty didn’t even have to resort to a saccharine explains-it-all epilogue. Big Little Lies didn’t have the most realistic ending, but it was certainly a satisfying one.

I was surprised at how dark it was, really, even though it managed to make me chuckle now and then. A New York Times book review said: “A seemingly fluffy book suddenly touches base with vicious reality”, which is spot on. There are laughs to be had, sure, but they’re ornaments on pretty heavy and disturbing subject matter. I hope everyone who picks this one up does so with eyes open…

The TV miniseries, produced by HBO in 2017 (starring Nicole Kidman, Reese Witherspoon, and Shailene Woodley) won eight Emmy Awards. The second season, based on a follow-up novella by Moriarty, brought in Meryl Streep(!). I haven’t watched either of them yet, but I checked out the trailers on YouTube; it looks like they’ve moved the setting to the States (boo!), but that’s the nature of the beast, I guess.

At the end of the day, Big Little Lies isn’t a “literary” read, but it lived up to the hype as far as I’m concerned. It was just what I needed after the brain-draining monster that was Ulysses! Moriarty’s writing was compelling, perfectly page-turner-y, and reminded me of how much fun reading can be. I would sum up Big Little Lies as being The Slap meets House Husbands, with a female cast and a murder mystery at its heart.

P.S. In her acknowledgements, Moriarty says: “Now seems like a good time to make clear that the parents at the lovely school where my children currently attend are nothing like the parents at Pirriwee Public, and are disappointingly well behaved at school functions.” = LOL!

Best Of The Keeping Up With The Penguins Reading List