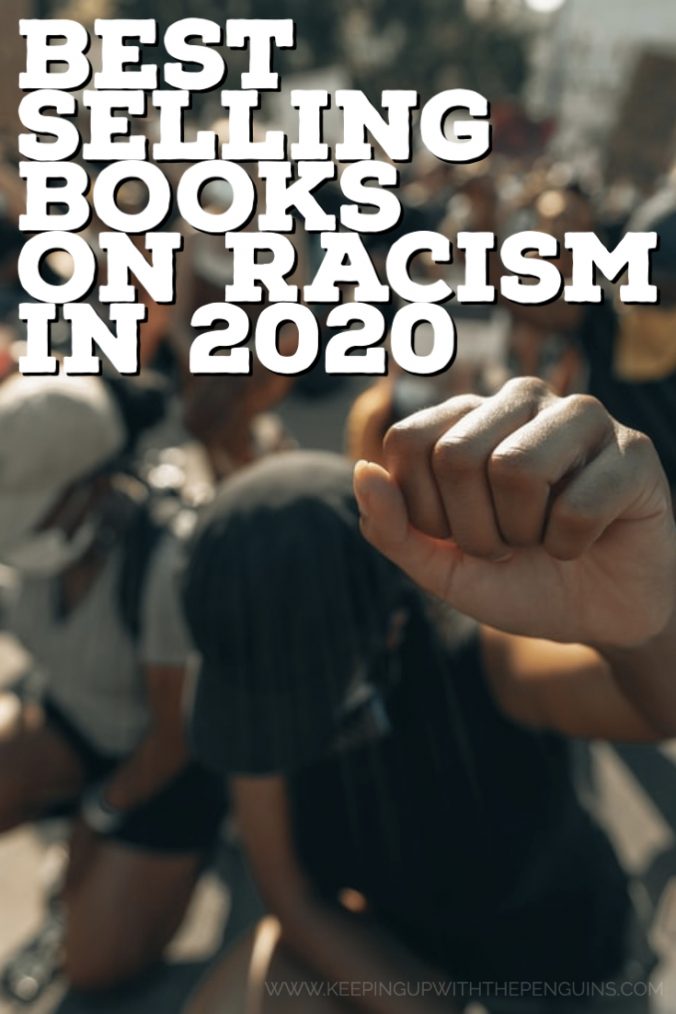 Best Selling Books On Racism in 2020

Earlier this year, in the wake of the deaths of George Floyd and Breonna Taylor, widespread protests and blanket media coverage drew unprecedented attention to issues of racial justice in the U.S. Because book people are the best people, many of us turned to books about racism and dismantling systemic discrimination to understand how we got here, and how to move forward. This week, I read and reviewed Reni Eddo-Lodge’s Why I’m No Longer Talking To White People About Race; it was published back in 2017, but this year it soared to the top of the sales charts and became the first (and only) black woman to top the UK’s best-seller list. I decided to take a look at some of the other best selling books on racism in 2020…

Just for a little more context: industry trackers showed a 330% increase in sales for books about civil rights, and a simultaneous 245% increase for books about racial discrimination, from the week of 17 May 2020. The books listed below, most published months or years beforehand, outsold even hotly-anticipated new releases with established followings (like the Hunger Games prequel).

These sales were no doubt boosted not only by the goodwill of concerned booklovers, but also the circulation of anti-racism reading lists by activists. This proves that books by and about people of colour are bankable, they can generate huge return on investment for publishers, when they’re given the attention they deserve. My hope is that, in constructing my own list here and continuing to read and amplify others, the interest in books on racism continues to grow (which will mean we see more of them on our shelves, which means more people will read them, and so on to infinity).

When you buy a book from one of the links below, I’ll get a tiny cut for referring you – but that’s not why I’m doing this. Please do consider seeking these books out at an independent bookstore, or requesting them at your local library, to support those vital resources in our communities.

So You Want To Talk About Race by Ijeoma Oluo

So You Want To Talk About Race addresses a lot of the practical questions that have been front and center of our minds this year (the reason we’ve turned to books on racism in 2020 to begin with). How should we respond to a racist joke? How can we explain white privilege to someone who doesn’t believe it exists? What are we doing that perpetuates systemic racism, and how can we stop? So You Want To Talk About Race hit the top of the New York Times Best-Seller list this year, so hopefully a lot of those conversations have improved as a result.

How To Be An Antiracist by Ibram X. Kendi

Once you acknowledge that racism exists and your role in it, what’s next? That’s what How To Be An Antiracist lays out for you: how to set about dismantling systems that perpetuate prejudice and privilege. As per the blurb, “Antiracism is a transformative concept that reorients and re-energises the conversation about racism—and, even more fundamentally, points us toward liberating new ways of thinking about ourselves and each other.” Not only did How To Be Anti-Racist soar to the top of the best seller lists, the New York Review Of Books named it one of the best books of the year.

The Fire Next Time by James Baldwin

Most of the best selling books on racism in 2020 were published at least a few years ago, but The Fire Next Time was actually published nearly sixty years ago. It would seem that James Baldwin’s words in this extended essay on civil rights still ring as true today as they did then. Drawing on his own youth in Harlem, and his insight into the real-world experience of injustice, it is both an exposition of racism and a rallying cry to fight it. Many of Baldwin’s other works went on to hit the best seller lists, too.

Me And White Supremacy by Layla F. Saad

Me And White Supremacy is the book you turn to when you need to take a long, hard look at yourself. It started with a personal development challenge on Instagram, one that called on people to examine their own biases and blind-spots, and is now a foundational self-help text in the fight against racism. Of course, it’s not just journal prompts and to-do lists: Saad includes important context, extended definitions, and directions to further reading that will set you on the path to fighting for civil rights.

White Fragility: Why It’s So Hard for White People to Talk About Racism by Robin DiAngelo

Even though most best selling books on racism in 2020 have been written by people of colour, there’s one notable exception: White Fragility. The author, Robin DiAngelo, is a white woman, and she actually coined the title phrase (“white fragility”, meaning a state of hypersensitivity and intolerance for issues of race, which trigger defensive responses when confronted). Even though the initial reception was mixed, this book hit the best seller lists alongside all of the other books on racism listed here. I think it’s an important example of white people taking responsibility for starting conversations and educating each other, as opposed to leaving all of that emotional labour to people of colour.

It’s not just non-fiction books on racism in 2020 that soared to the top of the best seller lists! Iconic fiction titles, including Beloved by Toni Morrison, also saw a huge spike in sales. The dirty pragmatists among us might question the logic – after all, shouldn’t we be reading about the real world in order to learn how to fix it? But in fact, reading fiction actually increases empathic responses and, in being more emotive, gives us stronger internal motivation to push for change. Fiction and non-fiction go hand-in-hand when it comes to opening our minds and combating racism, and Beloved is as good a place to start as any.