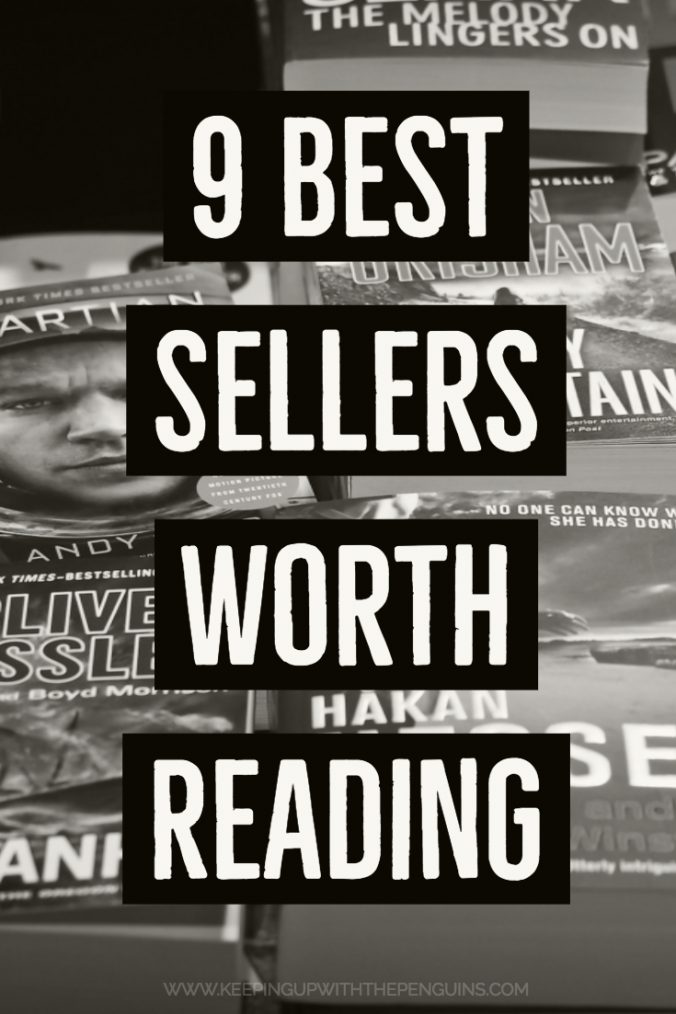 A little while back, I read American Sniper, and I wasn’t a fan. In fact, I was so pissed off, I ended up putting together a list of best seller books that aren’t worth your time. I’ve been thinking about that, and it doesn’t seem fair to tar all best sellers with that same brush – some of them do, in fact, get to the top of these lists by merit. So, as a little in-house counterpoint, I’ve put together a list of nine best sellers worth reading.

What Is A “Best Seller”?

A “best seller” is generally understood to be a book that has been included on one (of many) lists of top-selling titles. These lists are indeed usually based on sales figures and library-borrowing records, but they may also use other criteria (including, controversially, editorial discretion). The most famous of these lists is, of course, the New York Times Best Seller List, which has been running since 1974. Granted, snapping at its heels is the Amazon Top 100, which reflects the brute number of books sold through that platform over the given period, but it’s still the NYT ranking that you’re likely to see used in publisher promotional material.

Actually, when you start digging into the history of the New York Times Best Seller List, you learn a lot about how we value books and authors, trends in publishing over time, and the ways in which best seller lists don’t always reflect the reality of “best” or “selling” (ironically enough). For instance, there have been 780 books reach the #1 spot since the list was created, from 249 authors – so, one can logically deduce that the best predictor of having an NYT best seller is, well, having another NYT best seller.

In a different vein, the genre of likely #1s has shifted – away from literary and historical fiction, and towards mysteries and thrillers. Neither of these trends necessarily reflect the truth of book sales. After all, do you really believe that the public is only buying books by authors they’ve read before, or abandoning historical fiction in favour of a new generation of detective novels?

Let’s take a look at authors, shall we? Stephen King has had the most New York Times #1 Best Seller books by a single author, coming in at thirty-five (though James Patterson overtakes him when you take into account co-written books, with sixty-three unique titles). But when you look at the best-selling authors of all time, using more objective figures, it’s actually a dead heat between Agatha Christie and William Shakespeare, both of whom are estimated to have sold between two and four billion books each. Danielle Steele and Enid Blyton come in behind them, with several hundred million books apiece – King and Patterson don’t even rate a mention! In fact, the first author that appears in both lists, as far as I can tell, is J.K. Rowling (who has sold some 500 million, at last count).

As to the books themselves, The Da Vinci Code is the longest-running #1 book – it held the consecutive spot for 59 weeks… but not consecutively (it only managed 14 weeks in a row). The longest consecutive run was a relatively little-known romance novel called Love Story, which managed to hold onto the number one spot for 41 weeks straight. And, yet, according to the Guinness Book of World Records (is there any higher authority?), the Bible is the longest-running best-selling book of all time, with over 5 billion copies sold and distributed around the world. The Da Vinci Code has sold a paltry 80 million copies, by comparison, far fewer than Don Quixote (500 million), or The Hobbit (100 million).

These discrepancies, between the “top selling” books and the “best seller” books, occurs in large part because best seller lists only take into account sales over a specific period. In, say, a random week of 2003, The Da Vinci Code may well have sold more copies than the Bible… but the same cannot be said over a period of a hundred years or more. The problem is that most people don’t understand what “best seller” actually means, and it’s easy to confuse it with “top selling”… and this is the power of social proof that publishers exploit to convince us to buy a new release.

You can read more about the calculation of best sellers here, but for now, suffice it to say that being a “best seller” doesn’t necessarily make a book one of the “best”… So, I’ve sifted through historical records of New York Times best selling fiction, Guardian best seller lists, Publishers Weekly sales figures, and more, to find the diamonds in the rough. Here are nine best seller books worth reading…

The fact that Lolita cracked the #1 position on the New York Times Best Seller List is particularly noteworthy, given the uphill battle that Nabokov faced to even get it published at all. American publishers were (probably rightfully) concerned about its content: it’s an intense, graphic depiction of a stepfather’s repeated assaults on a young girl, and there is no happy ending for anyone involved. I know it sounds awful, but I promise you it’s some of the most beautiful prose you’ll ever read. In fact, Lolita is one of my favourite books of all time (and it very almost never saw the light of day!).

You might think, given my penchant for literary smut, that this is a dirty book – and, you know what, I’m sure there are some very conservative folks out there who would call it so – but really, Everything You Always Wanted To Know About Sex* (*But Were Afraid To Ask) was one of the first mainstream sex manuals written by a physician. It was a cornerstone of the Sexual Revolution. I didn’t even realise it had reached the #1 spot on the NYT best seller list until I began researching for this blog. I think you’d be hard pressed to get a book with such a liberal attitude to healthy sex up there today! It has sold over 100 million copies worldwide, and an updated edition entered circulation in 1999.

Harry Potter and The Philosopher’s Stone by J.K. Rowling

Not only did Harry Potter and The Philosopher’s Stone soar to the top of the New York Times Best Seller List (as did every other Harry Potter book at some point or another), it hung around so long and remained so popular that the Times ended up creating an entirely separate children’s best seller list, so that J.K. Rowling’s series didn’t hog the spotlight. Honestly, you probably couldn’t find a best seller list that hasn’t featured the Harry Potter books at some point (unless they were deliberately excluded). The series has sold more than 500 million copies worldwide, it is one of the most-translated books in history (over 80 languages), and the final installment (Harry Potter and The Deathly Hallows) holds the record for the biggest first print-run in history (twelve million copies) as well as having sold fifteen million copies in a single day.

*Update: Given that the author has turned out to be a real Dolores Umbridge, I can’t in good conscience continue to recommend the Harry Potter series. Give your money and time to an author who doesn’t amplify bigotry.

To Kill A Mockingbird by Harper Lee

I include To Kill A Mockingbird not just because it’s a fantastic book but also because it’s had a really weird trajectory in the best seller lists. It had various peaks and troughs between 1960 and 1961 (though Publishers Weekly confirms that it was one of the best selling books of 1960 in the U.S., and it has sold 40 million copies since publication)… then, it randomly re-emerged in the top 10 in 2016. This late spike is likely attributable to the death of Harper Lee early that year, but it seems like a rather dramatic up-tick to me, and not one that you see often with other books! Read my full review of To Kill A Mockingbird here.

I know Tina Fey has a core audience of dedicated fangirls, but I think that she is seriously underrated by the public at large. With the release of Bossypants, her audience expanded exponentially, and she shot to the top of the New York Times Best Seller List. It is an autobiographical comedy, full of hilarious anecdotes, brilliant insights, and sage wisdom – through a contemporary feminist lens. Awesome, eh?

A recommendation from Oprah, and inclusion in her Book Club, is pretty much a one-way ticket to sales success. Plus, when it gets Reese Witherspoon’s seal of approval – not only does she recommend it to her followers, but she buys the movie rights, produces the adaptation, and stars in it – the book is on a gravy train with biscuit wheels. That’s what happened for Cheryl Strayed’s memoir, Wild. It was not at all what I was expecting; I thought I was in for a light and fluffy find-yourself adventure, but instead I got a grueling 1,100 mile hike on the Pacific Crest Trail, fuelled by intense grief and spiritual yearning. It was a great read, and well-deserving of its moment in the sun at the top of the New York Times Best Seller List. Read my full review of Wild here.

I actually read Extremely Loud and Incredibly Close quite some time ago, long before I started this project, so I hope I’m remembering it correctly. I recall feeling extremely touched by the story, and I could hardly put it down. It’s not hard to see why it peaked at #1 on the New York Times Best Seller list, though – it’s the story of a young boy who traipses all across New York, on the hunt for what remains of his father, who died in the September 11 attacks.

The Martian is an incredible self-publishing success story, one of those overnight-successes that was years in the making. Andy Weir had a devil of a time getting an agent interested in his work, so he began publishing The Martian serially, for free, on his own website. After a bunch of readers expressed interest, he released it as a single e-book at the lowest possible price point on Amazon… only to hit the Amazon best seller list for science fiction in the blink of an eye. Sure enough, the big publishers came calling, and before you know it this quiet little book about a man trapped alone on Mars makes its way all the way to the top of the New York Times Best Seller list in 2015. I loved The Martian, it was brilliant and hilarious. Read my full review of The Martian here.

A Short History of Nearly Everything by Bill Bryson

It’s a really, really tough slog to get a popular science book to the top of any best seller list… and, yet, Bill Bryson’s A Short History of Nearly Everything ended up on the Guardian’s list of the top 100 selling books of all time in the U.K.! Along these same lines, I didn’t see Stephen Hawking’s A Brief History of Time at the top of any list, but the most recent estimates suggest that, since its publication, there has been a copy sold for every 750 people on the planet, so that’s a pretty damn good record. I would definitely say that one (or both!) of these true best sellers are worth reading, even if you don’t think you’re into science – you’d be surprised how often little fun facts about black holes and the theory of gravity come in handy 😉 Read my full review of A Short History Of Nearly Everything here.

The Fault In Our Stars – John Green