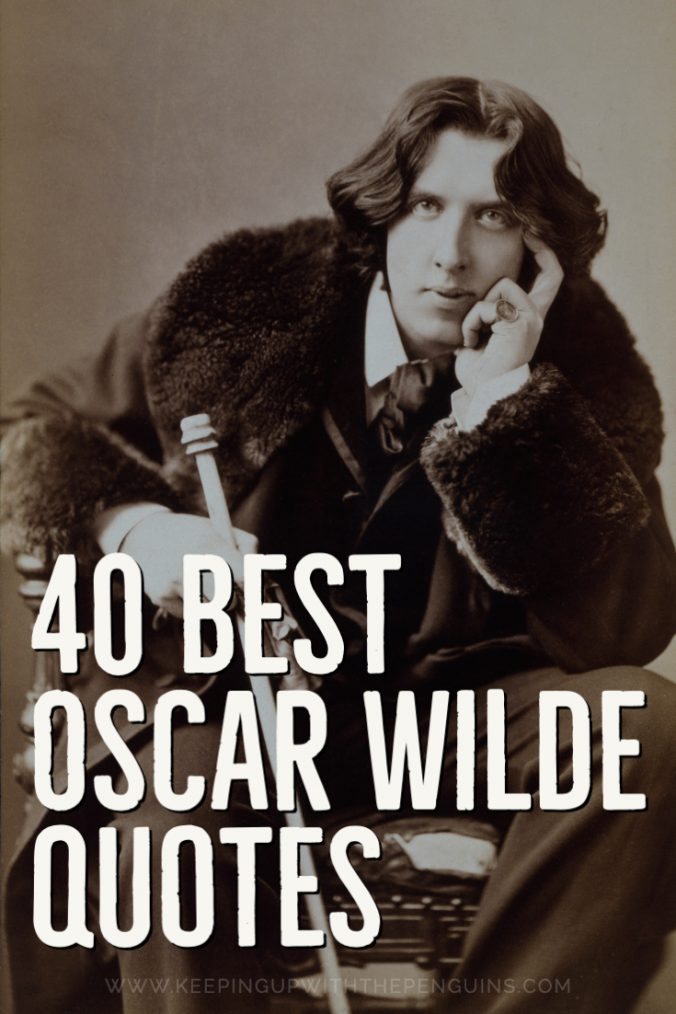 I’m not quite sure there has ever been a pithy wit quite like Oscar Wilde’s. Reading his work is to have your highlighter in hand, covering the page with it, as every line is quotable. It’s a travesty that he didn’t live in the age of Twitter – his feed would have been straight fire. I reckon there’s an apt Oscar Wilde quote for every occasion, and this is my chance to prove it. Here are 40 of the best Oscar Wilde quotes.

Morality is simply the attitude we adopt towards people we personally dislike.

It is absurd to divide people into good and bad. People are either charming or tedious.

To lose one parent may be regarded as a misfortune… to lose both seems like carelessness.

Consistency is the last refuge of the unimaginative.

I can resist everything except temptation.

A poet can survive everything but a misprint.

To win back my youth, Gerald, there is nothing I wouldn’t do – except take exercise, get up early, or be a useful member of the community.

He is really not so ugly after all, provided, of course, that one shuts one’s eyes, and does not look at him.

I never travel without my diary. One should always have something sensational to read in the train.

One can survive everything nowadays except death.

We are all in the gutter, but some of us are looking at the stars.

To love oneself is the beginning of a lifelong romance.

Anybody can make history. Only a great man can write it.

A dreamer is one who can only find his way by moonlight, and his punishment is that he sees the dawn before the rest of the world.

Don’t imagine that your perfection lies in accumulating or possessing external things. Your perfection is inside of you. If only you could realise that, you would not want to be rich. Ordinary riches can be stolen from a man. Real riches cannot. In the treasury-house of your soul, there are infinitely precious things, that may not be taken from you.

In married life, three is company, and two is none.

Keep love in your heart. A life without it is like a sunless garden when the flowers are dead. The consciousness of loving and being loved brings warmth and richness to life that nothing else can bring.

The Epigrams Of Oscar Wilde

The number of women in London who flirt with their own husbands is perfectly scandalous. It looks so bad. It is simply washing one’s clean linen in public.

Women have become too brilliant. Nothing spoils a romance so much as a sense of humour in the woman… Or the want of it in a man.

If we men married the women we deserved, we should have a very bad time of it.

It is always a silly thing to give advice, but to give good advice is absolutely fatal.

My own business always bores me to death. I prefer other people’s.

Women are meant to be loved, not to be understood.

The growing influence of women is the one reassuring thing in our political life.

Phrases And Philosophies For The Use Of The Young (1894)

All women become like their mothers. That is their tragedy. No man does. That’s his.

Laughter is not at all a bad beginning for a friendship, and it is by far the best ending for one.

A thing is not necessarily true because a man dies for it.

To live is the rarest thing in the world. Most people exist, that is all.

In this world there are only two tragedies. One is not getting what one wants, and the other is getting it.

All art is immoral.

Man is least himself when he talks in his own person. Give him a mask, and he will tell you the truth.

Sometimes the poor are praised for being thrifty. But to recommend thrift to the poor is both grotesque and insulting. It is like advising a man who is starving to eat less.