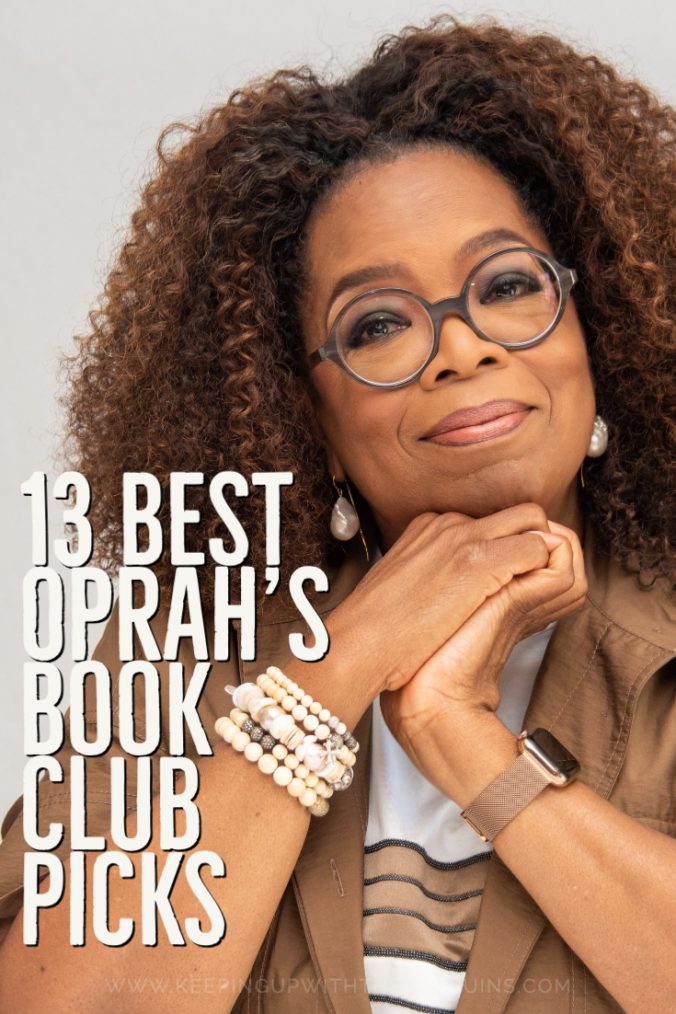 Of all the celebrity book clubs out there, not one has the clout of Oprah’s. Oprah’s Book Club is the O.G., the GOAT. Even now, where books are presented and discussed in a more fluid format than the monthly television segment, “The Oprah Effect” can see sales of a book spike to millions. One estimate put the total sales of Oprah editions alone at 55 million copies. Through the various iterations of Oprah’s Book Club, over 70 titles have been selected – but if you’re looking for the best-of-the-best-of-the-best, here are thirteen of the best Oprah’s Book Club picks.

In December 2018, Oprah said: “I want the whole world to read this book. I know everyone is already pre-ordering, and if you’re in a book club, you should read it together,”. It was hardly surprising that Becoming, the biography of the first black First Lady of the United States Michelle Obama, was one of the most popular Oprah’s book club picks. Oprah has interviewed Obama many times, and it would seem that they’re quite good friends. Plus, the content and themes of the book feed right into Oprah’s ethos of self-improvement and determination. “It is Michelle Obama’s story, of course,” she said, “but I know it’s going to spark within you the desire to think about your own becoming.” Read my full review of Becoming here.

I actually first heard of An American Marriage as one of Oprah’s book club picks. “I love this title because the novel redefines the traditional American love story,” she said in February 2018. “It’s really a love triangle and places it inside a world that a lot of people don’t know about, but impacts all of us in really big ways,”. Tayari Jones’s break-through novel revolves around two people, young black newlyweds, torn apart by a rape conviction; the husband is imprisoned, while the wife lives in suspended animation, unsure whether to continue her life or wait for the man she loves. It’s a brilliant read, and a brilliant pick by Oprah that’s sure to provoke a lot of conversations among her fans. Read my full review of An American Marriage here.

You might be surprised to learn – as I was, initially – that Oprah’s book club picks aren’t just contemporary best sellers. In fact, she has often dipped into the classics, as when she chose Anna Karenina. Back in 2004, Oprah read and recommended the timeless Russian classic for its exploration of “love, adultery, and loss”. It’s the story of the titular heroine, Anna Karenina, who is trapped in a passionless marriage, falling for the wealthy and charismatic army officer Count Vronsky. Most editions run to 900+ pages, it’s easily the longest book on this list, but if you find the right translation (Oprah recommended the Pevear and Volokhonsky version) the pages will fly by. Read my full review of Anna Karenina here.

In September 2016, Oprah confessed that she was “blown away” by Colson Whitehead’s The Underground Railroad. “[It] is an often-used expression, but with this book it was to the point of sometimes putting it down and saying, ‘I can’t read anymore. I don’t want to turn the page. I want to know what happens, but I don’t want to know what happens,'”. And I’m happy to attest that this harrowing tale of a teenage runaway slave, escaping the horrors of plantation life on an underground railroad that in Whitehead’s version is no longer metaphorical, is every bit as compelling and horrifying as Oprah says. Read my full review of The Underground Railroad here.

Cheryl Strayed’s memoir, Wild, follows her along her 1,100km trek along the Pacific Quest Trail, one that she undertook with no training and no cause other than an ineffable drive to do so. It was an Oprah’s Book Club pick in 2012, and thousands of people have since undertaken the hike for themselves, following in Strayed’s footsteps. I won’t be doing that myself any time soon – neither, I suspect, will Oprah – but the memoir is the next best thing. Strayed is remarkably open and generous in recounting the unfortunate life circumstances that drove her to her desperate wilderness pilgrimage. Read my full review of Wild here.

The Heart Is A Lonely Hunter by Carson McCullers

The Heart Is A Lonely Hunter explores themes of ostracism and racial disparity in the American South, as do many of the best Oprah’s book club picks. Selected in 2004, sixty-four years after it was first published, Oprah introduced this 20th century American classic to a whole new generation of readers who might not have otherwise sought it out for themselves. Fun fact (that Oprah herself highlighted in describing her selection): McCullers was only 23 years old when she wrote this story of two deaf-mutes in a small Georgian town, and said at the time that she was seeking “to create a novel about a character to whom other characters reveal their innermost secrets”.

Love In The Time Of Cholera by Gabriel García Márquez

In 2007, Oprah turned to the grandfather of Latin American magical realism – Gabriel García Márquez – for her book club, selecting his “stunningly written love story” Love In The Time Of Cholera. (It wasn’t the first of Márquez’s books to make Oprah’s list, One Hundred Years Of Solitude was also one of Oprah’s book club picks in 2004.) Márquez loved telenovelas (Latin American soap operas), and his passion for their romantic storylines and long-running arcs clearly influenced him in writing this particular story. It follows the love affair of Florentino Ariza and Fermina Daza, a young love that blossoms across decades despite many obstacles.

Another sweeping multi-generational epic makes the list of Oprah’s book club picks: Jeffrey Eugenides’s Middlesex. Although it is best known for its handling of gender identity (Cal, the main character and narrator, being intersex), it also covers a range of other topics and themes, including immigration, ethnicity, and taboo. Oprah wasn’t the only one who loved Eugenides’s 21st century bildungsroman; it also won the Pulitzer Prize the year following its release, and sold over four million copies around the world. Read my full review of Middlesex here.

Back when Oprah was still hosting her daily talk show, being selected for her book club meant that an author basically had to come on for an interview. I doubt that was ever a contractual obligation or anything, but… c’mon. It’s Oprah. That made her choosing The Road for her 2007 book club pick quite surprising. McCarthy is a notoriously reclusive writer, who very rarely grants interviews or any kind of public access – and yet, for the Queen of Daytime Television, he made an exception. He appeared on her show to discuss his book, and she called him out for blushing. She really can get away with anything!

Back in 2005, three Faulkner classics shot straight back up to the top of the best-seller lists as Oprah’s book club picks. One of the favourites was As I Lay Dying, Faulkner’s short novel about the death of a Southern matriarch and her family’s journey across Mississippi to bury her at home. It’s an odd choice for Oprah’s Book Club – some of the chapters are highly experimental, some are just downright weird – but at its heart this is an impeccably crafted character study of an American family, one you’ll enjoy despite its eccentricities and grim subject matter. Read my full review of As I Lay Dying here.

Oprah was not only a long-time fan of Toni Morrison, she was a long-time friend. She once called the critically acclaimed author “our conscience”, and openly dedicated herself to spreading Morrison’s message and boosting her books in the popular consciousness. She recommended several to readers as Oprah’s Book Club picks, including The Bluest Eye and Paradise, but one of the highlights was Sula, a “riveting” novel selected in 2002. The story is set in “The Bottom”, a tight-knit neighbourhood in Ohio, and follows the dark, intimate friendship between two young black girls, linked by a mutual secret.

The Poisonwood Bible by Barbara Kingsolver

Oprah chose The Poisonwood Bible for her book club back in 2000. She said Kingsolver “has a sneaky way of making us more empathic”, and has since described the book as “addictive” and “riveting”. The story revolves around the Price family, including the silver-tongued evangelical Baptist patriarch Nathan, as they undertake mission work in Africa. Their bonds, and their faith, are shaken by the challenges inherent in living in a squalid outpost, trying to bring “salvation” to the “natives”. The five women of the family “observe and comment the clash of cultures, the struggle to overcome stifling conventions, and the preservation of heritage—each with an utterly unique, convincing voice that draws you deeper into the story of a family’s unraveling.”

The Corrections by Jonathan Franzen

Okay, here it is. We can’t talk about Oprah’s book club picks without talking about Jonathan Franzen. As an immersive family saga, Franzen’s third novel The Corrections was an obvious choice for Oprah’s book club back in 2001. Despite the boost in sales and publicity that the selection promised, Franzen was not happy about it – and he said so, publicly. “She’s picked some good books, but she’s picked enough schmaltzy, one-dimensional ones that I cringe, myself,” he said in an interview, “even though I think she’s really smart and she’s really fighting the good fight.” Basically, he worried that by selecting his novel, Oprah was relegating his book to the “fun” side of the store, rather than the Serious Literary Art side, where he felt he belonged. There were also some ugly sexist overtones in his statements, which I won’t dignify by repeating here. Of course, they later buried the hatchet, and Oprah selected his 2010 novel Freedom for the club and they made a big show of glad-handing… but still. What a guy.