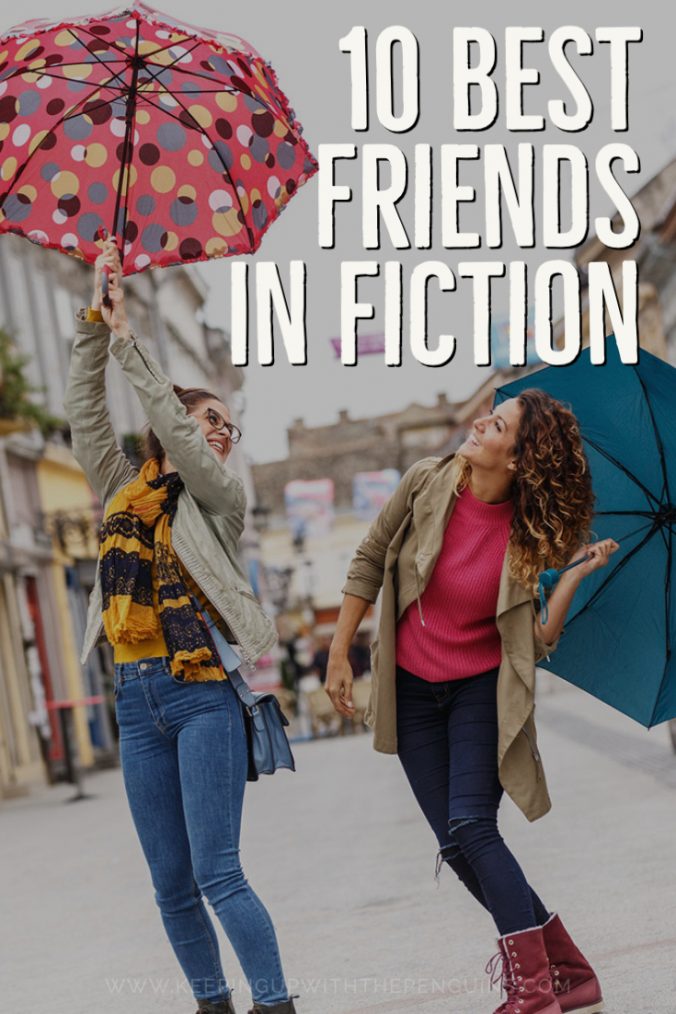 As the song goes, we all get by with a little help from our friends – and fictional characters are no exception! It’s a shame that romantic relationships so often overshadow the beautiful friendships that can emerge between characters. Here are ten best friends in fiction that will have you reaching for the phone to call your own.

From Little Women by Louisa May Alcott

I might be the only reader in the history of the world who didn’t want Jo and Laurie to end up together at the end of Little Women. I much preferred their adorable friendship to the inevitable disaster that would have been their romantic relationship. Jo would never have been happy with Laurie – their dreams and values were just too different. Friendship is often a good foundation for a happy marriage, but it doesn’t guarantee one. Read my full review of Little Women here.

From The Perks Of Being A Wallflower by Stephen Chbosky

I suppose, technically, the “best friends” of The Perks Of Being A Wallflower are Charlie and the Friend he addresses his letters to (the story is told in an epistolary style), but the trio Charlie forms with Sam and Patrick is pretty great, too. Infinite, even. One of the scenes that really stays with me – like, makes me gasp a little when I remember it – is when Charlie tells Sam that his former best friend died by suicide. She realises that he’s very alone, and tells Patrick that he needs them. Ugh, stupid teen novels pulling on all of our heartstrings! Read my full review of The Perks Of Being A Wallflower here.

From Girl, Woman, Other by Bernardine Evaristo

Every character’s story in Girl, Woman, Other is connected to another in some fashion. There are mother-daughter pairs, teacher-student, employer-employee… but to my mind the most memorable connection is Amna and Dominique’s friendship. Their lives veer in radically different directions (Amna is a playwright anticipating a big opening night at the National Theatre, while Dominique followed a girlfriend across the world only to find their relationship was awfully abusive), but there is a strong undercurrent of solidarity and understanding between them. Read my full review of Girl, Woman, Other here.

From My Grandmother Sends Her Regards And Apologises by Fredrik Backman

Elsa knows she’s different from other children, though the adults call it being “smart for her age”. Her Granny (who’s “old for her age”) is her superhero, and Elsa’s best (only) friend. Granny takes Elsa on marvellous adventures, talks their way out of trouble, and teaches Elsa how to stand up to the kids who bully her at school. The beautiful friendship between these two is the beating heart of My Grandmother Sends Her Regards And Apologises. They complement each other perfectly! Read my full review of My Grandmother Sends Her Regards And Apologises here.

From The Hours by Michael Cunningham

You’ve heard of friends-to-lovers, but what about maybe-coulda-been-lovers-but-instead-became-lifelong-friends? Granted, this best friendship from Michael Cunningham’s The Hours isn’t exactly a barrel of laughs – Richard is still traumatised by his mother abandoning him as a child, and dying of AIDS – but Clarissa’s steadfast devotion to him, despite their strange history and unfortunate circumstances, is incredibly touching. Bonus points for being an amazing queer friendship, into the bargain! Read my full review of The Hours here.

From The Adventures Of Sherlock Holmes by Arthur Conan Doyle

Has there ever been a pair of best friends in fiction that better reflected the old adage, “opposites attract”? Dr Watson narrates The Adventures Of Sherlock Holmes, the level-headed medical professional detailing the incredible deductive powers of his rational-to-a-fault friend detective. Despite their differences – or perhaps because of them – they’re remarkably effective at solving mysteries, and both seem to thoroughly enjoy unwinding together after a hard day’s work. Read my full review of The Adventures Of Sherlock Holmes here.

From Pride And Prejudice by Jane Austen

Elizabeth and Charlotte, from Jane Austen’s beloved Pride And Prejudice, are perhaps the most iconic best friends in fiction. At first they seem to share a sensibility about marriage and the prospects of a young woman in their era… that is, until Charlotte agrees to marry the insufferable Mr Collins, after Elizabeth has resolutely refused his proposal. In one of the most subtle and complex scenes of the novel, Charlotte explains her reasoning and Elizabeth is forced to reckon with her own privilege, which portends the larger romantic reckoning that comes later in the novel. Read my full review of Pride And Prejudice here.

From Conversations With Friends by Sally Rooney

Who says that former lovers can’t become best friends? Sally Rooney did her best, in Conversations With Friends, making the friendship between Frances and Bobbi fraught with drama and rife with sexual politics… but I think they got the better of their author overlord. Despite a shocking betrayal, and shifting loyalties throughout the novel, Frances and Bobbi have the kind of warts-and-all friendship that can survive it all (even if it ain’t always easy). Read my full review of Conversations With Friends here.

From My Brilliant Friend (the Neapolitan novels) by Elena Ferrante

Alright, perhaps Elena and Lila would be better placed on a list of best fictional frenemies, but here we are. For better or worse, they are one of the most complex and intriguing pairs of best friends in fiction. Elena Ferrante’s Neapolitan novels explore the depths and vagaries of their lives – together and apart – over decades, making the quartet a biography of a friendship. Everyone who has ever had a complicated life-long friendship will see themselves in Elena and Lila. Read my full review of My Brilliant Friend here.

From Of Mice And Men by John Steinbeck

Okay, I feel like this might be my most controversial pick of all the best friends in fiction. George and Lennie have a… shall we say, troubled, or problematic, best friendship. Of Mice And Men is a short novel, and most of it revolves around the (mis)adventures of these two. There is an alarming power differential, where George effectively acts as Lennie’s master, and a corresponding intellectual disparity. I maintain, though, that there is an undercurrent of obligation and affection that (mostly) runs both ways. If nothing else, it’s good fodder for American literature class discussions. Read my full review of Of Mice And Men here.