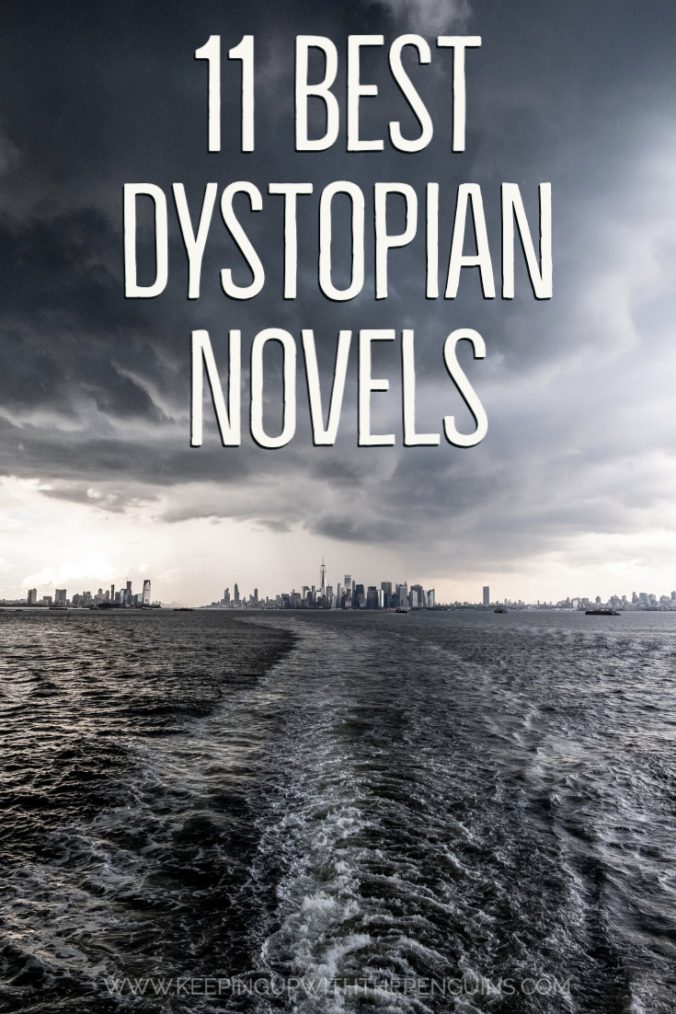 After reading and reviewing The Handmaid’s Tale last week, I had the idea to write a list of the best dystopian novels for Keeper Upperers interested in reading more. I’m not going to lie, though: putting this list together threw me into a bit of a funk. The more I looked over my shelves and Goodreads history, the more I started to think: “we’re LIVING in a dystopia, how can I separate out the truly dystopian books from the ones that are just slightly shittier versions of our reality?”. Sometimes, existential dread knocks you on your arse when you least expect it. But I picked myself up, dusted myself off, and pulled together this list of the best dystopian novels for you as best I could. Apologies in advance if some of them are just a bit TOO REAL…

The Testaments by Margaret Atwood

You’re probably scratching your head right now, thinking: “Huh? She’s recommending the sequel to The Handmaid’s Tale?”. I get it! Every list of the best dystopian novels includes Atwood’s best-known work (and probably a few of her others) as a shining example of dystopia done right. But, having read them both, I gotta say, I think The Testaments is the better book. The Handmaid’s Tale gave such a narrow view of the world of Gilead, just one woman’s perspective and her very personal story, that it left me itching for more. What’s it like to be an Aunt in Gilead, I wondered? Or a wife? All of those questions were answered in Atwood’s follow-up, released last year. It was also a much more pacy, page-turner-y read, like a dystopian thriller with a literary bent. You know what? Read them both! That’s the best way to be sure you’re getting everything you can from Atwood’s brilliant mind. Read my full review of The Testaments here.

The Island Will Sink by Briohny Doyle

Given our current situation, any list of the best dystopian novels must, by necessity, include a few examples of the burgeoning hybrid genre of “climate fiction” (also called cli-fi, or more generally anthropocene). Here’s one you might have missed: The Island Will Sink by Briohny Doyle. It’s set in a near future where the climate has changed, and late-stage capitalism has stepped in to try to stem the hemorrhage. It draws upon classic features of the dystopian genre – perpetual surveillance, infiltration, and distrust – and places them in a very timely imagining of what our world might turn into. Plus, it was published by the incredible local team at Brow Books, and you all know how I love to support OzLit!

The Power by Naomi Alderman

What if we take a real-world problem – the oppression of women in patriarchal cultures – and find a supernatural “solution”? That’s effectively what Naomi Alderman has done in The Power. The world is recognisable as our own contemporary hellscape, with one crucial difference: suddenly, teenage girls have the physical power to cause agonising pain… and even kill. It’s a startling, and gripping, exploration of the ripple effects. I think it’s typically shelved as young-adult fiction, but almost everyone I know who has read this has been an adult-adult and loved it, so don’t let your preconceived ideas get in the way!

Another crisis facing the real world: refugee migration. And another brilliant dystopian novel about how the “solution” might cause more problems than it solves: Daughter Of Bad Times. (Oh, and another awesome Aussie author, too: Rohan Wilson.) Australian immigration detention centers are turned into manufacturing plants, effectively taking private prisons and diversifying their revenue streams but slapping a family-friendly politically-advantageous label on their bastradry. The story unfolds around a tale of lost love, but it’s also a searing critique of the prioritisation of profit over people, and the logical conclusion of ignoring humanitarian values.

Getting back onto the climate for a minute: what if the exact opposite of what is really happening (the sea levels rising) happened in fiction (the sea levels receding)? Throw in a surreal time-travel element and you’ve got Dyschronia by Jennifer Mills. One morning, the residents of a fictional small beach town wake up to find that the sea has disappeared, leaving an expanse of rotting marine carcasses and other gross stuff behind. Not great news for a community that wanted to market itself as a seaside retreat! They wonder why a local girl, who experiences migraines that allow her to see fuzzy versions of the future, didn’t warn them what was about to happen before it was too late. Dyschronia a really wild, trippy read, and perhaps less recognisably dystopian than the other novels on this list, but it’s definitely my number-one pick for people interested in reading more Australian climate fiction. Read my full review of Dyschronia here.

C’mon, you had to know this was coming. No list of best dystopian novels is complete without the granddaddy of them all: Nineteen Eighty-Four. There’s a reason that “Orwellian” has become an adjective recognised across the English-speaking world! Even if you’ve not read this one yet (in which case, go do it, right now!), you’re familiar with its ideas: a totalitarian government keeps its citizens under constant surveillance, and a middle aged man – whose actual job is erasing archives and replacing them with fake news – decides to rebel. For me, the sign of a good dystopian book is one that teaches you something new every time you read it, and Nineteen Eighty-Four definitely does that.

It only seems fair, if Orwell gets a mention, that I throw Brave New World into the mix (Orwell and Huxley had serious beef, after all, and I wouldn’t want to be accused of playing favourites). This book actually started out as a satirical utopia, so Huxley’s vision of the future has a lot more sex, drugs, and rock’n’roll… but things turn to shit pretty quickly. An elite society stratifies everyone into a caste system and keeps them sedated with opiates and orgasms so that they don’t rise up and rebel. Huxley managed to predict a lot of the moral questions we still grapple with today about genetics, reproduction, psychology, and freedom. Read my full review of Brave New World here.

A Clockwork Orange really defies categorisation when it comes to genre, so I’ll cop it on the chin if you want to argue that it’s not “really” one of the best dystopian novels. I’ve seen it described as horror, character study, science-fiction, and plenty more. That said, even though it largely centers on the story of one particular man (a classical-music-loving delinquent who gets off on raping and pillaging and generally wreaking havoc), and lacks the intricate world-building of most of the other dystopian books listed here, it still represents a version of a future that terrifies the pants off me. A police state that can use creepy machines in dark basements to brainwash me into vomiting at the sight of blood? “Activists” who want victims to puppet their political beliefs? No, thank you, please! Read my full review of A Clockwork Orange here.

The Hunger Games by Suzanne Collins

I must admit, at first I wasn’t really sold on The Hunger Games. It was okay, but the trite love-triangle trope and the basic prose got in the way of my analysis. It’s only over time – and after watching the films, which (I duck for cover as I say this) I actually think are better than the books – that I’ve come to appreciate it for what it is: a really good introduction to dystopian novels for teens (and adults who are maybe nervous about dipping their toe in the water). In a post-apocalyptic North America, the land is divided into twelve poverty-ridden districts, surrounding one luxe and wealthy Capital. Each year, the districts must supply “tributes” – i.e., children and teenagers – to participate in The Hunger Games, an elaborate fight-to-the-death reality show for the entertainment of the Capital’s residents. I’m not saying it’s perfect, or that it’s particularly literary, but I would still say with conviction that it’s one of the best dystopian novels worth reading for newcomers to the genre. Read my full review of The Hunger Games here.

The Road is probably one best suited to advanced-level dystopian readers, ones who are happy to take their stories bleeeaaakk. It’s like a super-twisted road trip novel, where a nameless protagonist and his son journey across a different kind of post-apocalyptic North America, where civilisation and humanity have pretty much disintegrated beyond recognition. McCarthy is typically sparse, but searing, in his writing, so it’s a short book but you’ll still want to give yourself a lot of time to process it (and maybe switch to something a bit more light-hearted straight after, unless you want to wind up in the depths of despair).

I really wasn’t expecting to encounter a dystopian novel in Ishiguro’s backlist, but here we are. I thought Never Let Me Go was going to be a dark boarding school campus novel, and it is… kind of. He’s wily, that Ishiguro! He sneaks a lot of dystopian and science-fiction elements in when you’re not expecting them. I can’t actually say too much about the premise or plot, I think, without ruining it for other readers who come to it as naively as I did. If you’ve had this one simmering away on the back-burner of your to-be-read-list for a while, I recommend turning to it sooner rather than later – you’ll be glad you did! Read my full review of Never Let Me Go here.

Here are a few that I’ve not yet read, but I’ve heard are well worthy of inclusion on any list of the best dystopian novels, too:

What would you recommend as the best dystopian novels? Do any on this list pique your interest? Let me know in the comments below! (And all reassurances that the world isn’t quite a dystopia just yet would be greatly appreciated…)