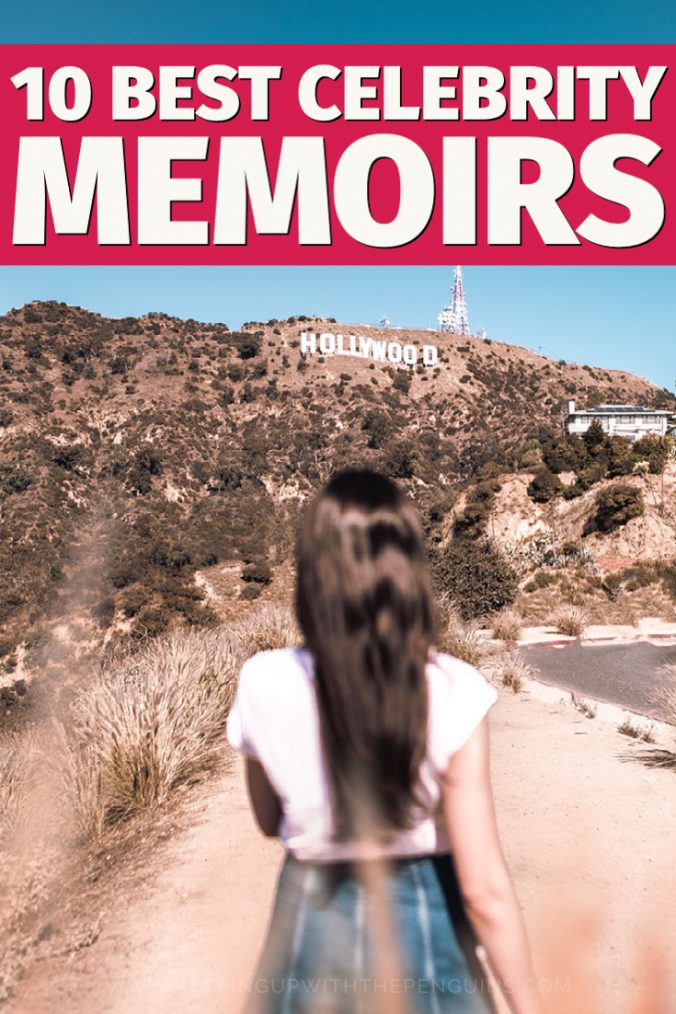 Celebrity memoirs are a bit of a mixed bag. Some of them are just okay, some of them are obvious publicity grabs, some are so clearly ghost-written and sanitised they leave you feeling a bit dirty. That makes it all the more special when you find a really, really good one! Here are ten of the best celebrity memoirs.

Michelle Obama bridges the gap between celebrity and political figure. She came to the world’s attention as the first black First Lady of the United States, but she’s become much more than that: a spokesperson for health and wellbeing, an activist, a comedy show guest, and a best-selling author. I was skeptical when I picked up Becoming, because I figured it couldn’t possibly live up to the hype… but it did! So much so that, after I finished the hardcover paper-and-ink version, I listened to the Grammy award-winning audiobook. It’s full of refreshingly honest insights into an unintentionally political life, marriage, motherhood, race, and growth. Read my full review of Becoming here.

Matthew McConaughey has been the punchline of many a joke, but it doesn’t seem to have affected him much. In the public eye, he went from rom-com leading man to Serious Actor(TM), but it turns out he was forged in fire long before he ever came to the silver screen. In Greenlights, a memoir-slash-scrapbook, he shares snippets from his first fifty years of life. He angles towards the self-help style of memoir, too, or (as he puts it): “It’s a love letter. To life. It’s also a guide to catching more greenlights—and to realizing that the yellows and reds eventually turn green too.”

I Feel Bad About My Neck by Nora Ephron

Name five classic rom-coms, and you can bet that Nora Ephron had a hand in most (if not all) of them. She was one of the most underrecognised comic geniuses of her time, with a keen insight into the human condition – but, of course, because her insight was “womanly”, it was routinely written off or outright ignored. Her memoirs are every bit as brilliant as her screenplays. I Feel Bad About My Neck is a collection of hilarious too-true anecdotes about getting older, and getting on with things. If you’ve ever been or might become “a woman of a certain age”, this is one of the best celebrity memoirs to get your hands on.

The Princess Diarist by Carrie Fisher

It burns me up that Carrie Fisher is almost universally remembered for wearing a gold metal bikini in an action film in her early twenties. She was an incredible woman, with a unique talent for radical honesty. And yet, she didn’t hesitate to lean into the skid – look at her memoir, The Princess Diarist. This hilarious (and, at times, horrifying) behind-the-scenes look at Fisher’s role in the original Star Wars franchise answers every question you could ever want to ask, and probably a few that wouldn’t even occur to you. It’s an intimate and revealing all-access pass to one of the most famous film sets of all time.

Gabrielle Union is “an actress, activist, and one-half of a power couple”, but before I read We’re Going To Need More Wine, I only knew her for her iconic role in the cult classic film Bring It On. It turns out, Union is much, much more than a sassy black antagonist. In her memoir, she bares all, exactly the way you would over a bottle of wine with a girlfriend. She talks sex, trauma, hair, colour, race, politics, family, filming, and more. When you’ve finished this particular celebrity memoir, you’ll feel like you could call Union up and continue the chat where she left off (but, don’t, obviously). Read my full review of We’re Going To Need More Wine here.

Talking As Fast As I Can by Lauren Graham

When you’re mostly known for a role on television where you talk as fast as a caffeinated Energizer Bunny, what else can you do but write a memoir about it? Lauren Graham barely pauses for breath in this (surprisingly brief) collection of essays about her role in the ’90s classic Gilmore Girls, her role in its ’20s reprisal, and everything in between. She glances back now and then, and regales us with stories of a childhood, singledom, and trying to “make it” as an actress in Hollywood. Talking As Fast As I Can is a delightfully cozy celebrity memoir to curl up with when the nostalgia hits.

Zoe Norton-Lodge is perhaps not as bright a star as some of the others on this list (not that I’d ever dare say it to her face), but for dedicated ABC viewers here in Australia she’s definitely a familiar one. She was part of the second generation of the Chaser team, who brought satire and comedy with a healthy dose of education and inspiration to our screens. I also know her as a brilliant regular feature at a local “sit down” storytelling night she co-founded (check out the podcast if you’re curious). All of this is to say that Almost Sincerely is maybe not the most obvious choice for a list of the best celebrity memoirs, but it definitely belongs here. It offers a side-splitting insight into growing up in ’80s and ’90s Sydney suburbia, from the pen of one of our most underrated storytellers.

The Girl With The Lower Back Tattoo by Amy Schumer

A few years ago, you couldn’t open Twitter or turn on TV without seeing Amy Schumer. She was the comedic It Girl with a twist, far from the demure, modest young ladies we usually thrust into the spotlight. Instead, she was unabashedly up for anything, as long as there might be a laugh in it. She’s retreated from public view a little since then, but she’s still streaming Netflix specials and selling copies of her memoir, The Girl With The Lower Back Tattoo. She leaves no stone unturned – her teenage years, her sexual partners, her drunken mishaps – in her quest to bring a little relatability to the hot messes of her fan base.

Year Of Yes by Shonda Rhimes

Shonda Rhimes has had a hand in just about every blockbuster television show to hit our screens in recent memories. So, why would she hire a publicist to help her avoid publicity? How did an introvert become basically a household name? In Year Of Yes, Rhimes recounts how she decided to overcome her near-crippling fear of getting amongst it, and stop using her family and her work as an excuse to hide behind the scenes. This is one of those rare celebrity memoirs that isn’t predicated on knowing or enjoying the subject’s work; even if you’ve never seen a Shondaland show, you’ll appreciate her story of overcoming and discovery. Read my full review of Year Of Yes here.

Karen Kilgariff and Georgia Hardstark aren’t writers – they remind you of that frequently throughout their co-written memoir, Stay Sexy And Don’t Get Murdered. They’re podcasters who somehow stumbled into a multi-million Murderino audience and worldwide influence, and have worked hard to keep their community thriving and positive, despite the rather (ahem) macabre subject matter that brought them together. This memoir imparts life lessons that everyone needs to know, true-crime-fan or not. It’s the ultimate how-to guide, as the title suggests, to staying sexy and not getting murdered. Read my full review of Stay Sexy And Don’t Get Murdered here.