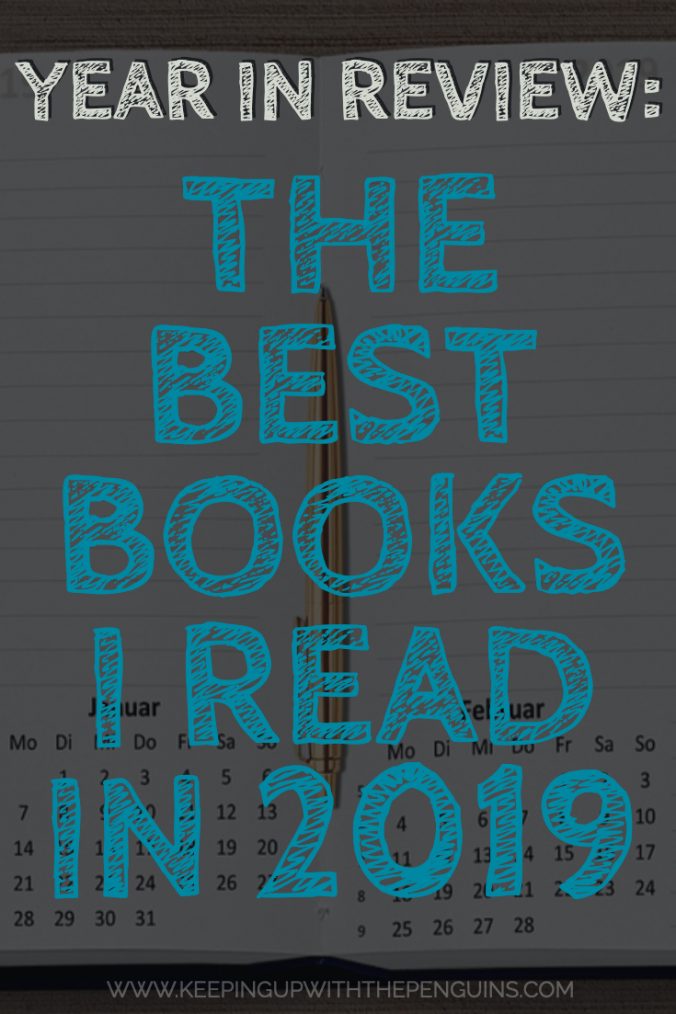 Another year is drawing to a close, which means it’s time for another obligatory year-in-review post, a round-up of all the best books I read in 2019. This year, I reviewed 51 books (though a 52nd will squeeze in just after Christmas, before the new year ticks over), and once again they spanned centuries and categories like you wouldn’t believe. That’s one of my favourite things about the Keeping Up With The Penguins project: the variety! I’ve covered everything from Pulitzer Prize winners (old and new) to little-known autobiographies, from Great American Novels to books in translation from Sweden, from hilarious Jazz Age social commentary to re-imaginings of Australian folklore. Here’s the best of what I’ve read this year, from start to finish…

Like almost everyone, I think, I sat down with my copy of Little Women carrying a heavy burden of skepticism. I assumed it was going to be fluffy, saccharine, a relic of the days before feminism taught the world that women were powerful. How lucky I was to pick up this edition, with its incredible introduction that detailed for me the life and politics of Louisa May Alcott. It really opened my eyes to what she was trying to do with this book, and how she cleverly – but subtly – subverted the weight of expectation that was thrust upon her. Read my full review of Little Women here.

Here’s another one I never thought I’d be including in a list of my best reads of the year. Portnoy’s Complaint, by all accounts, was a self-indulgent romp through the mind of an upper-middle-class Jewish American man, obsessed with sex and his mother (naturally). There was no way, I thought, I could possibly relate to, let alone laugh at, his neurotic monologue. Once again, the Keeping Up With The Penguins project has me eating my words: this book was hilarious! I cackled over poor Portnoy’s complaints, his childhood anecdotes, and his unbelievable knack for getting in his own way. Read my full review of Portnoy’s Complaint here.

Alright, here’s one I knew I’d love: I just had no idea how much. I saved up reading The Bell Jar for the moment I thought I needed it, and I’m so glad I did. It was searing, it was heart-breaking, it was gut-churning, it was tear-jerking, it was breath-taking. It’s a modern classic for a reason, Keeper Upperers, and it was so good I almost gave up reading and writing altogether when I finished it. Why bother, when something so beautiful already exists in the world? Trigger warnings aplenty, however – you’ve been warned. Read my full review of The Bell Jar here.


The Age Of Innocence – Edith Wharton

The Age Of Innocence is a lot like one of those boggy marshes with hidden patches of quicksand (I know, it’s not an elegant metaphor, but bear with me): it looks plain, maybe a little boring, but if you don’t keep your wits about you as you wander through, you could find yourself sinking and struggling to get free. Wharton’s prose is deceptively simple. What appears to be a description of a carriage or a house actually contains crucial commentary about the world her characters lived in and the way it worked. If you let your mind drift, you’ll miss it, and have to track back through the pages to pick it up again. Wharton was a trailblazer for 20th century female authors in America, and The Age Of Innocence totally holds up. Read my full review of The Age Of Innocence here.

Poor Stella Gibbons. I’d never heard of her, nor Cold Comfort Farm (her best-known work, which isn’t saying much) before I put together my Keeping Up With The Penguins reading list. In fact, it would seem that most people – outside of the very well-read English Lit elite – have never heard of her. She wrote dozens of books, and yet it took me a year to track down any of them. Why is she so underappreciated? Well, it would seem she had the audacity to parody D.H. Lawrence, the beloved grand-daddy of horny male writers in her time (and now, come to that), and she pissed off Virginia Woolf into the bargain. Essentially, Gibbons refused to play by the rules, and as a result, those in the powerful literary cliques sought to pull her from our shelves. I’d say that makes reading Cold Comfort Farm a political act. Read my full review of Cold Comfort Farm here.

Mark Twain’s books are divisive, I won’t deny it. I can certainly see the problems in his treatment of race in America, problems that have seen his books banned from many school libraries and removed from many a syllabus. But I really enjoyed The Adventures of Huckleberry Finn, in spite of myself. I loved the way he used dialect, the way he crafted his characters’ speech to tell the reader as much about them as what they were saying. The writing was brilliant, masterful, immersive, and compelling. I wasn’t as sold on Tom Sawyer, but they can’t all be winners. Read my full review – of both Tom Sawyer and Huck Finn! – here.


An Artist Of The Floating World – Kazuo Ishiguro

Are you tired of me explaining all the ways in which my preconceived ideas have been kicked in the bum this year? I hope not, because here comes another one. Kazuo Ishiguro is a Nobel laureate, getting the gong for literature back in 2017. I assumed, coming to his work knowing that, that it would be Very Literary(TM). To put it bluntly, I thought it would be dense, bleak, boring, and written for people far smarter than me. I was surprised, when I finally came across a copy of An Artist Of The Floating World, to see how slim it was, and even more surprised by how quickly I powered through it. I’ve talked before about how I’ve largely gone off WWII historical fiction, but this is one I can get behind. It’s set in Japan shortly after the conflict ended, and it follows a few days in the life of an artist who is not only “of the floating world”, but also created propaganda posters for the government. Read my full review of An Artist Of The Floating World here.

I must admit, even if I hadn’t enjoyed Pride And Prejudice, it would be getting a spot on this round-up of the best books I read this year, purely for the fact that I finished it! Long-time Keeper Upperers will know that I’ve been engaged in a brutal stand-off with this book for many years. I’ve picked it up no fewer than six times, only to quickly abandon it and move on to something else shortly thereafter. But now, I can proudly declare that I have read Jane Austen’s beloved prototypical romance, and I finally understand what all the fuss is about. My experience(s) with Pride And Prejudice just go to prove, once again, that it is crucial – crucial! – that a book comes to you at the right time in your reading life. Read my full review of the book here, and the movie adaptation here.

Gentlemen Prefer Blondes is, by a long way, the book I have recommended most often and most vehemently this year, to anyone who’ll listen (and even to those who won’t). I was completely knocked off my feet by this charming little tome, stylised as a series of diary entries chronicling the adventures of society darling Lorelei Lee. If you’ve seen the movie and figured that you didn’t need to read the book (or if you didn’t even know there was a book, no judgement!), you’re dead wrong. This is the most astute, insightful, and witty take on gender roles in the Jazz Age (and all subsequent ages) that I have ever read. Forget about Gatsby (ugh): leave your copy at a local Little Library, and curl up instead with this absolute gem. Read my review of the book here, and the movie adaptation here.

Have you ever read a book that was so good it made you angry? That’s what happened to me when I read The Grapes Of Wrath. I was nonsensically angry with every single person in my life who had read it and hadn’t (a) recommended it to me immediately, and (b) warned me about how gut-punchingly good it was. I didn’t want to like it. Steinbeck shamelessly ripped off years of work, that of a woman who history has all but forgotten. But the story of the Joads, their migration across America to seek their fortunes (i.e., survive), moved me in ways I can barely describe. It’s all the more incredible, too, for its startling relevance in a climate that is rapidly changing… Read my full review of The Grapes Of Wrath here.

Upon reflection, this might be my year of reading (and loving!) dialect, because – like with Huck Finn, and a few others on this list – what drew me in most to Carey’s reimagining of an Australian folk “hero” was the way he represented an early Irish-Australian accent on the page. True History Of The Kelly Gang is the first book I’ve ever read that has, in my expert-by-virtue-of-living-here opinion, accurately and beautifully represented Australian speech in a way that doesn’t make the reader want to claw their own eyeballs out. And if that doesn’t sell you on it, consider this: Carey imagines an internal world for Kelly that few have considered before reading this work, but simultaneously allows the reader room to make up their own mind about his morality or lack thereof. A must-read Australian novel! Read my full review of True History Of The Kelly Gang here.

If you want to check out more of my best-of recommended reads, try this list of the best books I’ve read so far, earlier in the year.