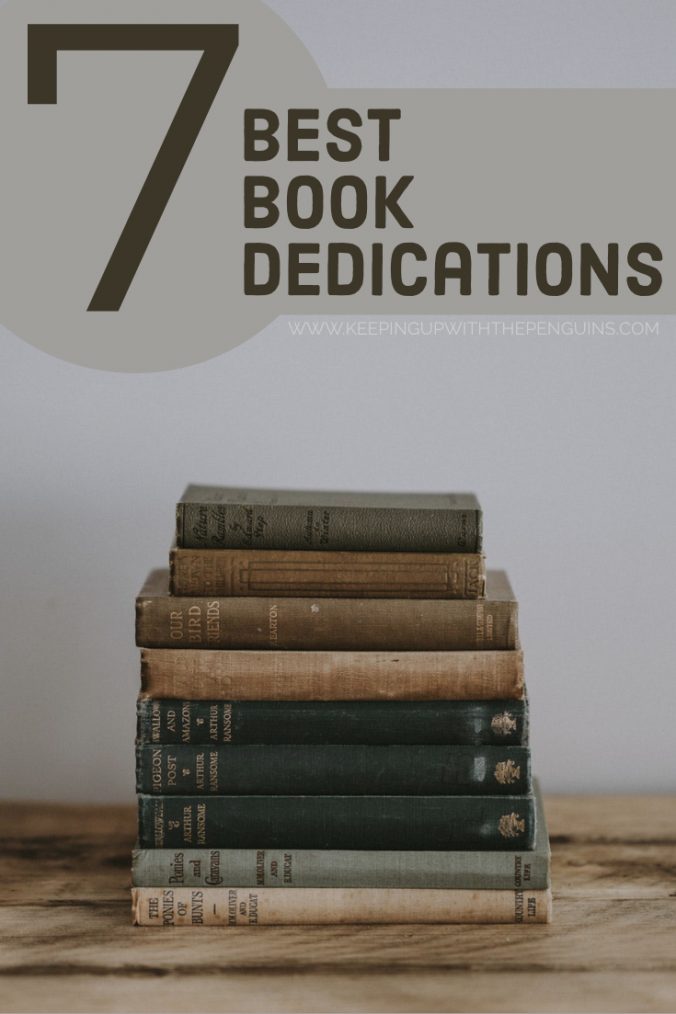 Here’s a history lesson for you: the tradition of book dedications dates back centuries, to when authors would use the opportunity to suck-up to their patrons or elicit money from wealthy supporters of the arts by placing a few kind words alongside their name in the front of every copy of their book. Virgil dedicated some of his works to his patron, Maecenas. Jane Austen dedicated Emma to the Prince Regent, because she’d been a bit too critical of him in the public forum and one of his circle “suggested” she best make it up to him. Using a book dedication for a personal expression of love or gratitude is a relatively recent idea (as is the boring cliche of using codes, initials, or in-jokes to mask the message’s true meaning). Luckily, lots of brilliant writers have found fun ways to make the convention their own. Heck, sometimes the dedications are better than the book! Here are seven of the best book dedications I’ve found…

“To my creditors, who remain a permanent source of inspiration.”

In the tradition of those writers centuries ago, who created dedications to honour their patrons (without whom they surely would have starved), Michael Moorcock offered a contemporary twist in the front of his book The Steel Tsar. I think every struggling artist can appreciate this pithy one-liner, and the way it captures the ever-pressing drive to create fuelled by a need to simply pay the bills.

“To Frank O’Connor and Nathaniel Branden.”

Ayn Rand gets the gong for the most courageous dedication: she devoted Atlas Shrugged to her husband, and her lover – two different men! In her author bio, she added that her husband (Frank O’Connor) had the values of character she sought in a man, while her lover (Nathaniel Branden) was her “intellectual heir”, an ideal reader with as rational and independent a mind as she could conceive of, whom she met through a fan letter he sent her. In later editions, after 1968, Nathaniel’s name and the sentence describing him were removed. He must’ve fucked up big-time (or Frank finally called her out on her bullshit)…

Honourable Mention: Elizabeth Rees-Williams managed to deftly avoid such dramas by dedicating her autobiography to “RH”. Her first husband was Richard Harris, and her second was Rex Harrison. Points for diplomacy!

No Thanks (E.E. Cummings)

It’s too bad that the formatting of this blog won’t let me lay out this dedication in its original shape. E.E. Cummings is the king of sass. His collection, originally titled “70 Poems”, was rejected fourteen times, leaving him a little disheartened. So, he hit up his mother, she loaned him $300, and he published the collection himself under its new title: No Thanks. This dedication is the name of each publisher who rejected him, laid out in the shape of a funeral urn.

“For Phyllis, who made me put the dragons in.”

If his book dedication is to be believed, then George R.R. Martin owes this Phyllis a few bucks. What would the Song Of Ice And Fire series be without dragons? “Mother of Cats” or “Mother of Horses” just doesn’t have the same ring to it…


The Lion, The Witch, and The Wardrobe – C.S. Lewis

I wrote this story for you, but when I began it I had not realised that girls grow quicker than books. As a result you are already too old for fairy tales, and by the time it is printed and bound you will be older still. But some day you will be old enough to start reading fairy tales again. You can then take it down from some upper shelf, dust it, and tell me what you think of it. I shall probably be too deaf to hear, and too old to understand a word you say, but I shall still be

The Lion, The Witch, and The Wardrobe (C.S. Lewis

Oh, my heart! Have you ever read anything so pure in your life? C.S. Lewis dedicated The Lion, The Witch, and The Wardrobe to Lucy Barfield, the adopted daughter of his long-time friend Owen. Not only that, he named the heroine of his story after her. Clearly, his goddaughter made quite an impression on him! She has a heart-wrenching life story herself, diagnosed with MS in her 20s and continuing to write poetry up until her death in 2003 (this beautiful Guardian article about her had me in tears), but apparently she took great delight in letters from fans around the world who believed her to be the real-life Narnia-adventuring Lucy.

It might take a minute for the full horror and beauty of the dedication in Toni Morrison’s Beloved to sink in: the sixty-million to whom she refers are the black men and women who died in the Atlantic slave trade. The novel itself speaks volumes to the after-effects of slavery, its ongoing impact and the suffering that continues to this day, thus “and more”.

“I normally dedicate my books to Katherine, Jake, and Julia. Not this time.

For Julia, Jake, and Katherine.

Because Julia is tired of always being named last just because she’s the youngest.”

I had to end on a lighter note, and thinking of all the years of nagging that went into this dedication for Messenger Of Fear makes me giggle! Poor Michael Grant! I hope Julia finally feels she’s been appropriately acknowledged.


And a final word: pour some out for those incredibly prolific authors who are forced to get increasingly creative with their dedications as their back-catalogue grows. Poor Agatha Christie had to do it seventy-four times over! She dedicated the first to her mother (The Mysterious Affair At Styles), then a later effort “to all those who lead monotonous lives” (The Secret Adversary), and another to her dog Peter (Dumb Witness), and – my personal favourite – one to her friends “Larry and Danae, with apologies for using their swimming pool as the scene of a murder” (The Hollow). Ha! Have you come across any great book recommendations? Share them in the comments (or over at KUWTP on Facebook!).