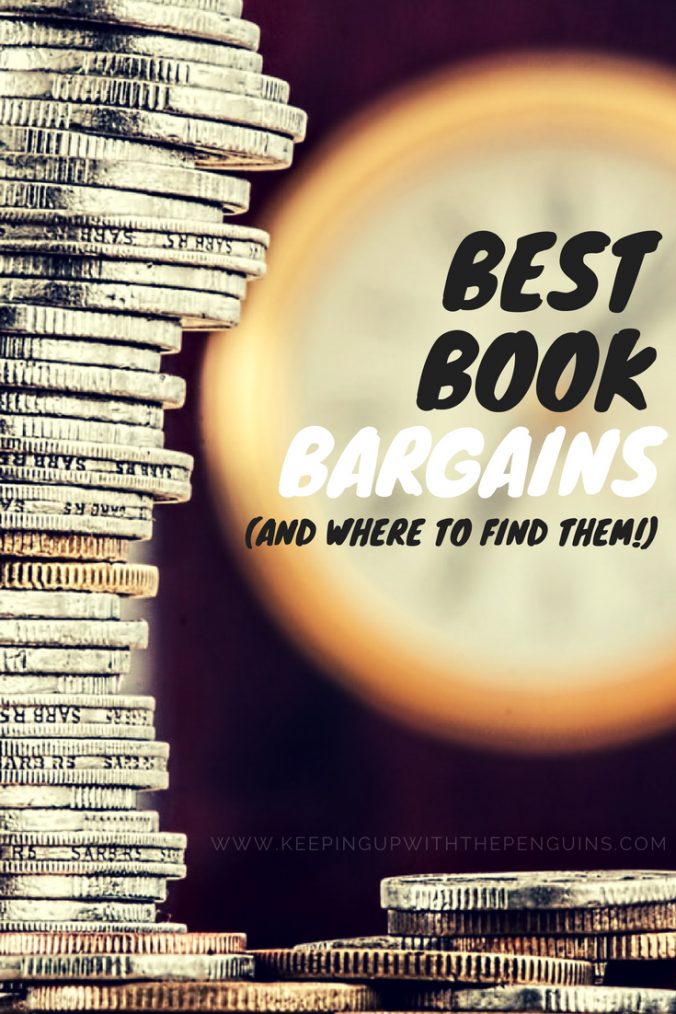 Starting the Keeping Up With The Penguins project presented a bit of a problem: books ain’t cheap. I set myself a limit of $10 per book, but even if I stuck to that 100% if the time I would still end up spending north of a grand.

Plus, in my soul, I’m a firm believer in compensation for artists. Getting the books cheaply is great for me and everything, but authors should get paid what they’re worth for their work.

On top of that, I adore independent and second-hand bookstores. Every dollar that I spend with them means employment for the creative writing student, and bills paid for the small business owner, and support for small presses, and opportunities for emerging writers.

So, my life for the last year has been a delicate balancing act: finding books that fit within my budget, while upholding my own ideals about the book industry. I love the thrill of the hunt. Nothing compares to finding a long-sought-after tome buried in a bookstore bargain bin, especially when you can take it home in exchange for just the shrapnel that you have in your pocket. It turns out I have a real knack for it!

There’s a perception that buying books through smaller and independent retailers means spending more: I’m here to prove that’s not the case! I thought I’d share a few of the best book bargains I’ve found for Keeping Up With The Penguins.

Dracula was one of my first bargain bin finds, and I walked home afterwards on cloud nine! I spied it at my local secondhand bookstore, marked at the princely sum of $3. As far as the best book bargains go, this is a classic case of right-place-right-time. You can get a copy almost as cheap here.

The Complete Works of Oscar Wilde

I’ll admit I broke the budget with this one, but I feel it’s justified! Technically, my $10 limit was just for The Picture of Dorian Gray (reviewed here), but this collected works edition contains everything that Oscar Wilde ever wrote, so if I average it out… it was a steal! I found this one in a tiny crammed bookstore in Tel Aviv (of all places!) while on my honeymoon. I paid 50 shekels, which converted to roughly $20 back home.

When I set out to find Yes Please, I thought it’d be a fool’s errand. Poehler had reached peak popularity at the time, for her performances on Saturday Night Live during the American election. But I struck gold! I spotted her memoir in the window of my local secondhand bookstore, marked at $10 (right on budget!). It was super-early and they weren’t open yet, and I had to get to work – so I messaged my husband immediately and made him promise to be waiting outside the door when they opened, to secure it before someone else did. Because he loves me, he did just that, and that’s how it came to be this week’s review!

I got the best kind of book bargain for Moby Dick: it was free! I actually “borrowed” (re: stole) it from my husband’s collection. Of course, in doing so, I ended up with a copy so excessively worn and dog-eared that I was scared to open it, lest it fall apart. Still, it (miraculously) held up, and it served me well!

The Book Thief was #1 on the Dymocks 101 list of 2016, so I knew finding a bargain copy was just a matter of patience. When a book is announced as a winner of any kind, there’s a rush to buy it and everywhere sells out, then there’s a lull as everyone reads it, and then eventually it starts showing up in garage sales and secondhand bookstores. That’s why super-popular-major-best-sellers can be some of the best book bargains you’ll find, if you’re patient. Sure enough, I managed to pick up The Book Thief about twelve months after its nomination, for just $4. There’s a few copies almost as cheap left on Amazon, get in quick!

I actually bought this one many years before Keeping Up With The Penguins was even conceived. I was picking up something else entirely from Big W in the small regional town where I lived at the time, and I spotted The Hunger Games marked down to just $2.37. I’d heard of the book and figured I’d want to read it one day, so I grabbed it. And, what do you know, I finally got around to it!

A Passage To India – E.M. Forster

My purchase of A Passage To India is notable simply for the fact that I don’t often buy hardcovers, but this one was such a bargain I couldn’t resist! I find hardcovers bulky and annoying a lot of the time (even though many of them are beautiful, drool!). Still, when I spied this beautiful, perfect, pristine edition in that ever-giving local bookshop, I couldn’t resist! An absolute bargain at just $7. I reviewed E.M. Forster’s subcontinent classic here.

Now, just because I’m a local bookstore fiend doesn’t mean there aren’t best book bargains to be found through the bigger retailers. I’m not that much of a snob! 😉

Dymocks (Australia’s major book retailer) tends to run some fantastic 3-for-2 promotions, and I’m always keeping an eye out for deals on the Penguin Classics (particularly when they come with the gorgeous Penguin merch!). I also subscribe to the mailing lists for Booktopia and Book Grocer, because they have some cracking deals come around now and then. (I’m not affiliated with any of these folks, just love their work!)

Another hot tip: Amazon actually has hundreds of classics available for free on Kindle! Works that have passed into the public domain (after their author has been deceased for 75 years) are downloadable for free, or at least very cheaply! If you’re hung up on hard copies, though (like I am!), you can still get some amazing deals. Check out all the freebies here – you’ll be surprised at what you might find! (Now, this one IS an affiliate, just so you know.)

What’s the best bargain you’ve ever found on a book? Let me know in the comments below (or tell us over at KUWTP on Facebook!).