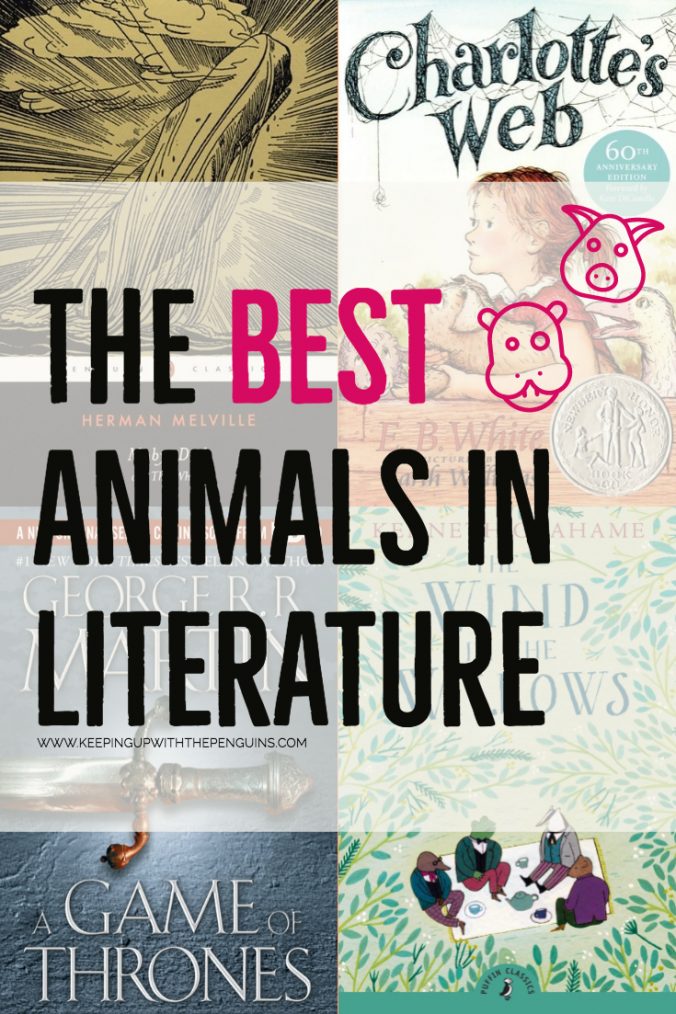 Who’s a Good Boy?: The Best Animals in Literature

If you’re joining us here on Keeping Up With The Penguins, chances are you’ve long outgrown The Very Hungry Caterpillar and Fantastic Mr Fox. It’s a sad fact of life for animal-lovers that our favourite furry friends are usually only given star billing in books for children. Animals – especially the ones that talk, wear pants, befriend humans, and/or do magic – are left behind as we age.

And yet, animals were once the central focus of storytelling. Look at the stories of the Dreamtime, or (more recently) our mate Aesop’s fables: animals feature prominently as heroes and villains, plots center entirely around the relationships between them, and their narrative arcs are never questioned or reasoned away as childish fancy.

Luckily, there are still many authors giving animals a look-in, even in books written for grown-ups. In celebration of this week’s review, let’s take a look at some of the best animals in literature.

From Moby Dick by Herman Melville

Of course, we must start with Moby Dick, the albino leviathan who drove Captain Ahab to madness. Moby Dick is widely considered to be one of the best animals in literature – nay, one of the most significant non-human characters of all time, used for a symbol of everything you can imagine. The gigantic white sperm-whale might represent the power of nature, the ravages of colonialism, the futility of our quest to understand God through religion, or about a dozen other things depending how you read the book. Whatever your fancy, I think we can all agree that in the end it’s nice to see the whale get a win, dragging the obsessive and vengeful Ahab to his death, entangled in his own harpoon. Well done, Moby D! Well done! Read my full review of Moby Dick here.

From Charlotte’s Web by E.B. White

I know we’re supposed to be focused on books for adults here (and, come to that, I know Charlotte isn’t technically an animal), but even grown-ups can enjoy the heartwarming tale of an intelligent spider saving her friend (Wilbur, the pig) from becoming breakfast. In Charlotte’s Web, Charlotte weaves special messages into her web, at great personal effort, and Wilbur repays the favour by helping to protect Charlotte’s egg sac. One of the best animals in literature for sure! Who can resist such a touching display of cross-species friendship? If you left this one behind in primary school, I strongly recommend going back to revisit it; if nothing else, the nostalgic kicks will make it worth your while (though it may seem sadder than you remember).

Everyone comes to Game of Thrones for the dragons, but the direwolves are the best animals in literature of this stroke. Ghost was the runt of his litter, small and white and mute, but under the care of the similarly-beleaguered Jon Snow he grows into a strong and powerful companion. He saves the day on more than one occasion, usually when you’ve lost all hope. George R. R. Martin famously kills off his human characters with such speed and cruelty that a lot of readers abandon his work early on, but so far most of the animals have met a kinder fate. At this point, he can do what he likes with Jon and the rest of them, as far as I’m concerned – on the condition that he leaves Ghost and the other direwolves alone. Read my full review of A Game Of Thrones here.

From The Wind In The Willows by Kenneth Grahame

Who doesn’t love a classic cocky rogue? Sure, this one’s a toad, but still! Mr Toad is resourceful, intelligent, and possibly the only one of his kind that hasn’t made me recoil in disgust (no way would you find me kissing a toad in the hopes of finding Prince Charming, not worth it!). Plus, it turns out a toad can make tweed suits look good – who’dathunkit? Mr Toad is, of course, surrounded by a host of other charming animal characters (including Ratty, and Mole) in Grahame’s celebrated classic, making The Wind in the Willows a huge bang for the animal-lover’s buck! Read my full review of The Wind In The Willows here.

I have always maintained that Toto is the superior character in Baum’s fantasy world, let alone one of the best animals in literature, and I stand by it. My insistence might be hard to understand if you’ve only seen the film (most people don’t even realise that it was based on a series of books), but even next to Judy Garland, Toto was a total bad-ass. He was a true and loyal friend to Dorothy – indeed, the only one she seemed to have at home in Kansas. He totally saved the day when he escaped from the clutches of the Wicked Witch, guiding Dorothy’s friends back to her so she could be freed too. Plus – bonus points! – it’s revealed later in the books that Toto had the power to talk all along, he just didn’t feel like it so he never did, which makes him pretty much the queen of sassy animals.

And there you have it: the best animals in literature (according to me). Yes, I snuck a couple of children’s books in there, but there’s definitely plenty to keep the adults entertained as well. I personally get far more emotionally attached to the animals in books than I do the humans, and their character arcs become the most important aspect of my enjoyment of the book. What about you? Who else should be on this list of the best animals in literature? Let me know in the comments below (or answer over at KUWTP on Facebook!).