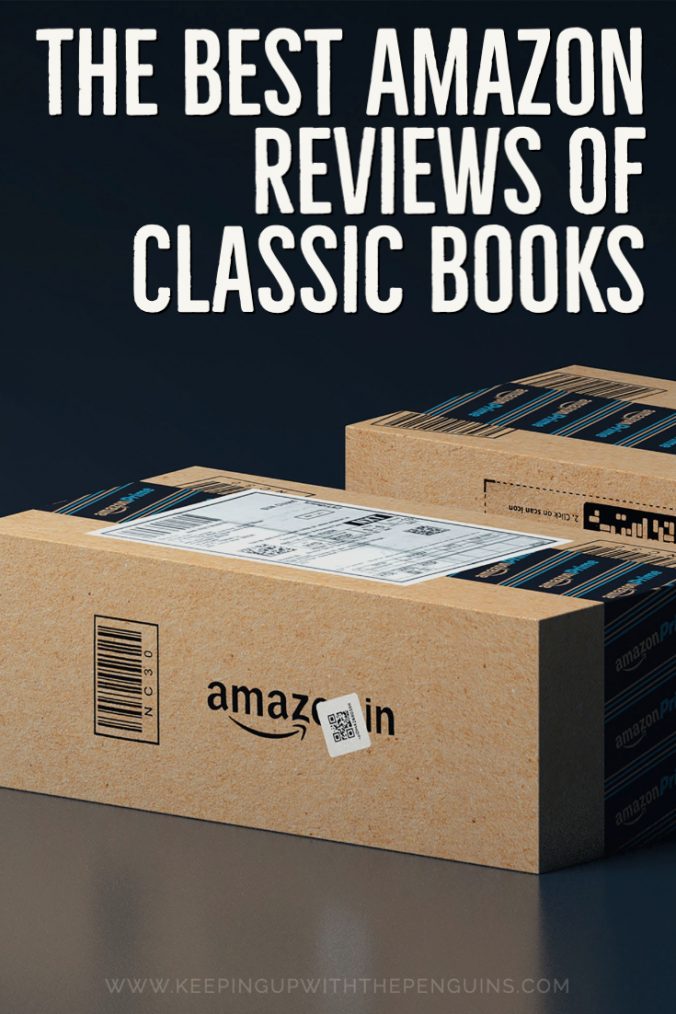 “My personal legend is complete and the sun is setting on the mountains to the north. My treasure is having been able to complete this stupid book and put it away forever.” – Laura WG

Read my full review of The Alchemist here.

The Bell Jar by Sylvia Plath

“What light-hearted fun this was! A comedy romp from beginning to end. Highly recommended if you need cheering up.” – Katie Krackers

Read my full review of The Bell Jar here.

“The mass baby electrocution scene was epic. ZAP! That’s what you get for looking at books!” – John Sapinski

The Catcher In The Rye by J.D. Salinger

“I’ll be honest, I’m not sure if the author knew this or not, but the teen in this book does quite a bit of drinking and I’m pretty sure it’s illegal to drink under 21. Now sure, we’ve all done it but does that make it right? Maybe. So I guess the real question here is, should we lower the drinking age? I don’t know. Ask JD Salinger.” – JACOB AND SUMMER

Read my full review of The Catcher In The Rye here.

“I cannot like this book. How did this become a classic? The gibberish throughout hurts me. I feel dumber just attempting to read this ‘book’. My feelings are the characters are stupid. They beat people up, smoke, and cause trouble all in a language that is not English. Not fun to read. Not engaging. Not anything worth recommending. If I wanted to read nonsense I would find Dr Seuss books, at least those make sense.” – Amazon Customer

Read my full review of A Clockwork Orange here.

“This book manifest a many-eyed demon in your soul, who will proceed to tear the blindfold off your inner child’s face, exposing him to the blinding light of truth as he falls headlong into the abyss while madly clawing at the smoking pits that were one his pure, innocent eyes.” – Amazon Customer

Read my full review of Crime And Punishment here.

Delta Of Venus by Anaïs Nin

“I suggest a more accurate title for this book, “Bored with Copulation” by Inane Nincompoop.
Don’t expect this shoddy diary to enhance your bag of sexual tricks to surprise your lover.” – Where Waldo?

Read my full review of Delta Of Venus here.

The End Of The Affair by Graham Greene

“My third time out with Greene. The guy’s a bore. The End of the Affair is like having the Watchtower shoved at you by a Jehovah’s Witness with a really high opinion of himself.” – Fintan Ryan

Read my full review of The End Of The Affair here.

“This book sucks so much. It is the worst, most pretentious piece of crap I have ever read. I had to read it for school and I couldn’t even finish this poorly written atrocious piece of crap. If this book had a face, I’d punch it in the balls. Zero stars.” – Tyra Howell

The Golden Bowl by Henry James

“I found the lives of people who had nothing better to do but visit each other and gossip, woefully uninteresting.” – Ms Katharine L. Kane

Read my full review of The Golden Bowl here.

“So, I’m only on page 478 of 619, but I’ve been disgusted at the amount of profanity. So far I’ve found more than 500 uses of profanity! On average every page (with relatively big writing, even) has more than one swear. Yikes!

I’m never going to read Grapes of Wrath again, and won’t be recommending it to anyone.If you don’t like profanity, be careful.” – Jef4Jesus

Read my full review of The Grapes Of Wrath here.

“I was forced to read this book in my English class this year, and I almost died. For a more thrilling read, try a dictionary or a phone book.” – Brandon Rohrig

“This was the worst book I have ever read in my entire life. My whole family hates it too. Honestly, I could barley read it for 10 minutes without it putting me to sleep from Gulliver dragging on about garbage no one cares about. I would rather drink a gallon of mayonnaise then read this, actually I would BATHE in mayonnaise for a MONTh then read this book. And don’t even think about saying “oh I bet its not THAT bad,” because it IS THAT BAD! I wish I didn’t have to read this book for my class, but by the time i’m done, I might as well burn the book.” – AmazonShoper

“Despite the fact that I bought this on the recommendation of a stupid jerk who acted like I hung the moon until one day he suddenly broke up with me the day after I’d been awake all night in the ER with a sick kid… OVER THE PHONE, NO LESS… WTF?!… it’s a really good book. You can’t blame Capote that there are terrible humans in the world, even if he did write about them really well. Maybe my boyfriend recommending a book about a gruesome family execution should have tipped me off. I dunno. You live, you learn. But yeah, good book.” – Jess

Read my full review of In Cold Blood here.

The Life And Opinions Of Tristram Shandy, Gentleman by Laurence Sterne

“I checked the ratings on Goodreads. This is what it showed:

Meaning: 95% of these readers are flock-following, digression-loving, hobby-horse riding loonies who have swallowed the Kool-aid. There is nothing here but vacuous thundergunk. Pure, putrid unentertaining garbage. If I would have laughed once – just once – during the reading of this book, I would have given it a whole extra star, but it couldn’t even do that. I give him one star for spelling Tristram’s name right, and even then, it’s a made-up name anyway, so I may have been hoodwinked as well.” – Martin M. Bodek

Read my full review of The Life And Opinions Of Tristram Shandy, Gentleman here.

“I had to read this book for literature class I hated it. my teacher rattled on about the symbolizm in this book.It was so boring and kinda gory.plus no girls, wasnt they suposed to repopulate the world after nuclear war so not possible with only boys. The one thing i found interesting was how they acted like wild animals after they had been on the island a while.that was kinda cool.But it was to confusing” – Amazon Customer

Read my full review of Lord Of The Flies here.

“I was told this was about fishing. It’s not. Because a whale is a mammal.” – Joe Octane

“Catcher In The Rye… as told by middle-aged English farts. The party! The party! Let us listen to an old farty woman stream her consciousness to us to hear, pointless thoughts that go nowhere. That’s pretty much this book in a nutshell. Very boring. Mrs Dalloway whines about not marrying Peter Clark, but Pete’s been in India for five years. I’m sure she would have been unhappy either way, marrying him or not, him leaving or not; all she does is party, chill with friends, and rinse & repeat. Ughhh.” – Allen

The Pilgrim’s Progress by John Bunyan

“This book is about as far away from biblical salvation as you can be. The main character had to work for his salvation which is not what the bible teaches. John 6:47, Romans 4:5, Eph 2:8-9If you wish to confuse someone and see your friend or relative in hell, get them this book.” – Dave Nesbitt

Read my full review of The Pilgrim’s Progress here.

The Prime Of Miss Jean Brodie by Muriel Spark

“I just wanted to say that this book made me wish that theyd legalise hand guns in the UK. It is the kind of book that makes little children cry. I have read more interesting stuff on the bake of crisp packets. In conclusion 9/10 phycopathic maniacs recomend reading The Pride of MJB before going on a random killing spree.” – Mr Cook’s Favourite Pupil

Read my full review of The Prime Of Miss Jean Brodie here.

“This book is, without question, the most boring peace of literature ever written. It makes the technical manual to my VCR look like “Raiders of the Lost Ark”. In fact, it’s so boring that I recommend a new synonym for boring, “Rebecca”. The book is about people who have disgustingly unbelievable personalities, who do really boring things, and make up mysteries about killing people that aren’t even in the story, then insist on telling you about it. The main character/narrator is the most overly emotional and sappy person in all of fiction, and could never ever be a real person, even in the 1920s when this book takes place. She insists on telling you about all of her problems, and how she can never “feel right” at Manderly, even though no sane person could EVER care. It’s enough to make you sick. The story really wasn’t that bad but it could have easily been told in about 1/10 of the amount of time. It’s like Dickens description without everything that makes Dickens good. Even after the thousands of atrocities committed by Hitler, I still consider him to be a great man, for burning THIS book. It’s that bad.” – person

“Mr Hyde was described as complete evil. Other than bumping into a kid and killing a man, what else has he done? I’m disappointed.” – Kevin Palmer

Their Eyes Were Watching God by Zora Neale Hurston

“Stupid book. Some dumb and eliterit redneck writed it but it has a whorible story. Janny is a nayeeve teenager who thinks about love in a economicol way. she does’nt no enything about supply and command.” – Mason Weinstock

Read my full review of Their Eyes Were Watching God here.

The Turn Of The Screw by Henry James

“There are no more commas left in the world for anyone else because Henry James USED THEM ALL.” – BarbMama

Read my full review of The Turn Of The Screw here.

“Classic Victorian plot of everyone being too proud to be happy.” – Jamie K Devine