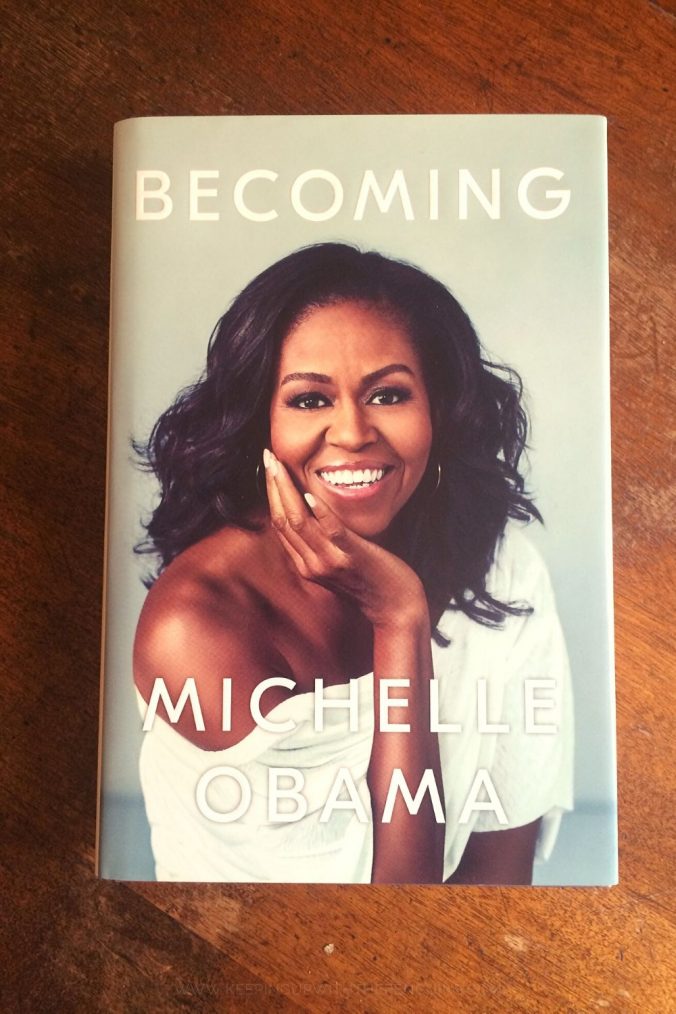 I worry that reviewing Daisy Jones And The Six has put me on a dangerous path. All of a sudden, I find myself tempted to pick up all of the hugely hyped books of the past few years, the ones I thought I’d never bother reading, just to see if they live up. Here’s exhibit B: Becoming. (Does that mean I’ll end up reading A Promised Land, too? We’ll see…)

I think we can all agree that the market for White House memoirs is well and truly saturated. Even before the Trump era, we were drenched in the recollections of the second undersecretary to the whoever of no-one-cares. It makes me wonder whether it’s even possible to have a single unguarded conversation with anyone who might go within a hundred feet of the U.S. federal government, seeing as they all seem to have notebooks and voice recorders in their pockets…

But there seems to be something special about Becoming, Michelle Obama’s account of her life up to and including her time as the first black First Lady of the United States. It sold 725,000 copies on the first day of release, and 1.4 million in its first week. It set the record for the best-selling book published in the United States in 2018, just fifteen days after it hit the shelves. What’s most remarkable is that its popularity has persisted, past the initial curiosity spike and gossip-hounding; as of November 2020, there are at least 14 million copies in worldwide circulation.

The thing is, there’s nothing about the way the book is written – with its straightforward chronological format, and no-nonsense accessible tone – that seems remarkable at all. Content-wise, it didn’t seem particularly earth-shattering, either. From the preface alone, I got the impression that, while Obama was going to be frank about the ups and downs, she’s an earnestly optimistic person at heart and Becoming was hardly going to be a salacious tell-all.

The first section, Becoming Me, covers Obama’s life growing up on the South Side of Chicago, with loving parents and a stalwart brother in an apartment above her aunt and uncle’s. Thanks to her mother’s advocacy, her own hard work, and a couple of lucky breaks, she received a more-than-decent education that saw her accepted into Princeton University (and, later, Harvard Law School). Obama recounts a fairly charmed-life version of her childhood and adolescence. Her story is not without sadness or difficulty, but it all just seems so wholesome. There was, as she tells it, no more angst than a gnawing sense of self-doubt, and no more misbehaviour than a (very) brief mention of smoking pot and necking with a boy in the backseat of his car. Surely, she’s left the good stuff out.

Becoming Us – as you might guess – covers her courtship and marriage to Barack, whom she met as a young lawyer at a prestigious law firm. Obama is a little more open in this section, about her desire to leave the corporate world, her misgivings about her new husband’s political career, and – most admirably – her miscarriage and troubles conceiving.

That said, sometimes the writing gets a bit repetitive, especially through the first half (we get it, your Aunt Robbie is a hard-arse). There are times where it also feels a little indulgent; some anecdotes had me wondering “Why are you telling me this? What’s it going to add to the story?”. I had to remind myself that Obama is a public figure, not a writer – that’s probably why Becoming is so long, and willfully ignores some of the more creative aspects of memoir writing.

The feminist in me is pushing me to pretend that these early developmental sections – how Obama became Obama – are the most interesting, that Obama’s own career in law and then community advocacy are the best parts of Becoming. They aren’t a snooze fest – it’s interesting and inspiring to see how a young woman persevered to overcome everything that was, on paper, against her – but let’s be real. The reason we read Becoming is for the third and final section, Becoming More – her account of her time as First Lady.

Throughout the election campaign and early days after the vote, it’s clear that Obama had an agenda: to be the change she wanted to see in U.S. government. Even though she, herself, wasn’t in a position to be drafting policy or implementing legislation, she still had a certain sway – especially with the public – and she used it tactically. Her Let’s Move campaign was seeded with her concerns about her own daughters’ nutrition, and by carefully and strategically addressing those concerns and bringing them to a bigger platform, she sowed and reaped tangible changes for childhood nutrition across the U.S.

She also offers some really powerful and touching insights about her own mis-steps and mistakes while her husband was in office: from her naivete to outright ignorance of what her role should be and what it required of her. She’s not quiet about her frustrations with the media and public attacks on her and her family, but she doesn’t seem overly bitter about them, either. Throughout Becoming, her faith seems to lie in her in-person interactions with the public. “When voters got to see me as a person, they understood that the caricatures were untrue,” she says, on page 270. “I’ve learned that it is harder to hate up close.”

I got the distinct impression, from the way Becoming is written and presented, that the Obamas aren’t done with politics and public life. She insists, in the Epilogue, that she herself has no aspiration or interest in pursuing a career in politics, but given the sanitary and affirming tone of the book, I don’t quite believe it.

Publishing her memoir has certainly given Obama a huge platform, perhaps even bigger than the one she held while her husband was in office. Becoming was an Oprah’s Book Club pick – with all the international reach and influence that that entails – and the audiobook even won a Grammy (for Best Spoken Word Album, 2020). If she were to pursue some new line of public life, I’ve no doubt they’d pave the road in gold for her. In the meantime, Becoming wasn’t perfect, but it was a pleasure to read, and I’ve gained some insight into recent U.S. political history that surely won’t go astray.

My favourite Amazon reviews of Becoming:

His Only Wife – Peace Adzo Medie