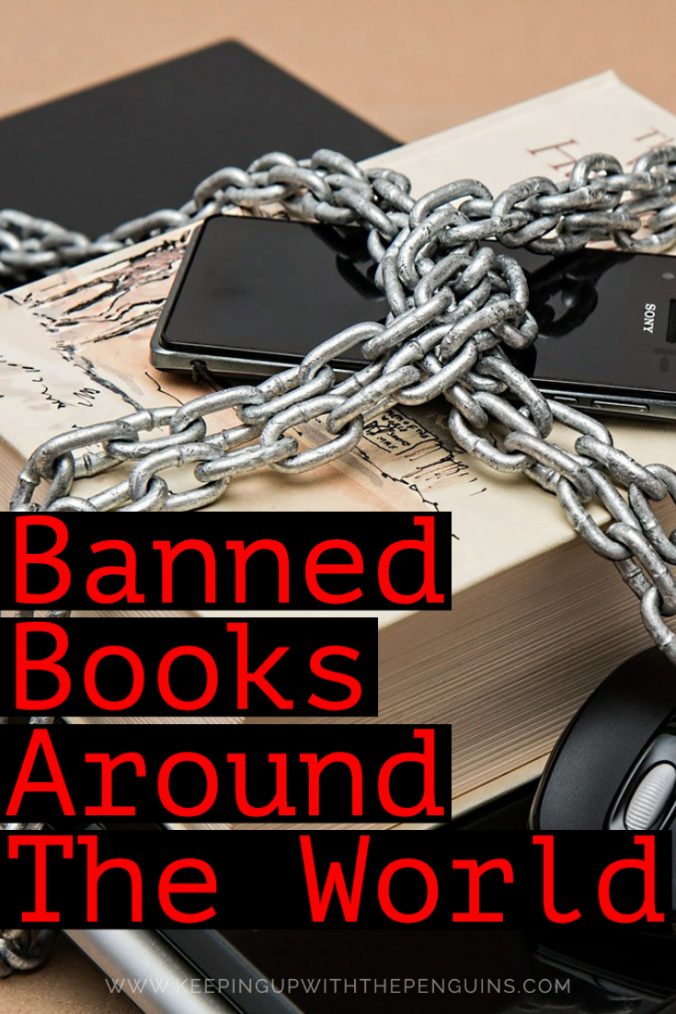 Banned Books Around The World

Earlier this year, five people were arrested in Hong Kong for “conspiring to publish, distribute, exhibit or copy seditious publications”. The publications in question were a series of children’s books about sheep. The Guardians Of Sheep Village sought to explain to children the 2019 democracy protests, The Janitors Of Sheep Village depicted sheep workers going on strike, and The 12 Braves Of Sheep Village saw twelve sheep escape their village’s wolf overloads by boat (in reference to the twelve Hongkongers who sought to escape by speedboat to Taiwan last year). It seems unthinkable that, in the 21st century, there are governments in the world still trying to control and censor what their constituents read… but here we are. Take a look at some of these banned books around the world.

Note: I’ve chosen not to delve into the books banned in Nazi Germany, partially because it’s such a long list in and of itself, but mostly because there’s a lot of potential for insensitivity that I wish to avoid. Plus, I didn’t want to give the impression that book banning and book burning are problems specific to one geography and government…

When I read Lady Chatterley’s Lover, I couldn’t see what all the fuss was about, but a lot of governments sure did get their knickers in a knot over it. In 1928, the Chinese translation by Rao Shu-yi was denied publication by China’s Central Bureau, and booksellers weren’t allowed to stock or sell any version of the novel. It was also banned in Australia, the United States, and the United Kingdom, for violation of their respective obscenity laws, until the 1960s. There was quite a famous court case about it, and current editions of the book (like mine) are dedicated to the jurors who acquitted the publishers on charges of obscenity. Read my full review of Lady Chatterley’s Lover here.

Huxley’s Brave New World depicts a (you guessed it) brave new world, where everyone’s high and having sex, and babies are made in test tubes. It’s a sort of dystopia in utopian clothing, if you will. In this cautionary tale, the Irish government found “comments against religion and the traditional family”, as well as “strong language” and “sexual promiscuity” – grounds enough to have it banned in 1932. They weren’t alone in their condemnation; Australia also banned Brave New World the same year, and the Indian government called Huxley a “pornographer”. I guess we know which countries to avoid if we want sex, drugs, and rock’n’roll after the apocalypse… Read my full review of Brave New World here.

The Satanic Verses by Salman Rushdie

Oooh boy! *cracks knuckles* If there were awards for most banned books around the world, The Satanic Verses would surely be a contender. Salman Rushdie was roundly condemned for his alleged “blasphemous treatment of a character modeled after the Prophet Muhammad and of the transcription of the Qurʾān”. The Iran Ayatollah was so ticked off, he put a hit out on Rushdie (a fatwa), forcing him into hiding for years. He couldn’t leave his safe house (which changed every few months) without protection. The book was banned in (*deep breath*): Bangladesh, Egypt, India, Indonesia, Iran, Kenya, Kuwait, Liberia, Malaysia, Pakistan, Papua New Guinea, Senegal, Singapore, Sri Lanka, Tanzania, and Thailand.

Special mention: Hitoshi Igarashi, Rushdie’s Japanese translator, was murdered in 1991 as a result of his involvement with The Satanic Verses and the fatwa issued on anyone involved with its publication. Always, always, always #NameTheTranslator – sometimes they die for the work they do. Vale.

It’s hard to imagine any government finding offense in Alice’s Adventures In Wonderland. It’s a children’s book, for goodness sake – and largely nonsensical, to boot! I’m sorry to say that doesn’t stop them. In 1900, a school in the United States proposed that the book implied expletives and alluded to masturbation (no, I’m not kidding), and “other sexual fantasies”. I mean, I personally am not turned on by the Cheshire Cat, but go off, I guess. Later, in 1931, the powers that be in Hunan, China, banned Alice and co. because anthropomorphised animals are “insulting”, somehow. General Ho Chien contended that teaching children to regard humans and animals as equals would be “disastrous”. And then finally, back in America in the 1960s, a whole new batch of parents worried that Alice’s adventures would encourage kids to try hallucinogenic drugs. All told, these are some of the most ridiculous reasons I’ve heard for banning books. Read my full review of Alice’s Adventures In Wonderland here.

Banning Frankenstein might seem funny on the face of it (or warranted, depending on your view of the macabre), but there’s actually a dark truth behind this one. In 1955, the South African government banned Frankenstein for containing “obscene” or “indecent” material. The thing is, this was shortly after the Prohibition of Mixed Marriages Act and amendments to the Immorality Act, introduced to prevent “Europeans” and “non-Europeans” forming families. Yes, this is some awful apartheid shit. The government saw in Shelley’s science fiction an “indecent” message about the “amalgamation” of people. Just thinking about it makes me shudder… Read my full review of Frankenstein here.

Turns out a book about a bloke who wanders around Dublin for a day, drinking and wanking and forgetting to pick up the perfume he bought for his wife, raised some eyebrows. Who could have guessed? Ulysses has been banned by various governments since it first appeared in serial form in 1918-20. An excerpt featuring the aforementioned cheeky wank came to the attention of the New York Society for the Suppression of Vice, and (true to their name) they did everything they could to suppress its circulation. The United States Postal Service even burned copies that were sent in the mail. A landmark court case, United States v. One Book Called Ulysses in 1933, finally caused the ban to be lifted. The United Kingdom also lifted their ban on its distribution shortly after. Australia held firm, though, and suppressed its circulation until the 1950s. Read my full review of Ulysses here.

Simone de Beauvoir once said that The Second Sex was her attempt to explain “why a woman’s situation, still, even today, prevents her from exploring the world’s basic problems”. Luckily, she first published it in France, where permissive attitudes and effective absence of obscenity laws meant that anything went in publishing – even broads getting mouthy about their shitty circumstances. Francoist Spain held a different view, though, and banned the book for “advocacy of feminism” (they didn’t even try to cloak it in euphemism, bless them); they didn’t account for the brave feminists who would smuggle in copies of the book and circulate it themselves, until the ban was lifted and an accurate translation permitted for publication.

One of the very first books to be formally banned in the United States was Uncle Tom’s Cabin. In 1852, upon its publication, the southern Confederate States banned it for its abolitionist philosophy and for “arousing debates on slavery”. (Funnily enough, the States – now “United” – are still having that same argument about, for instance, The Hate U Give, alleging that it arouses abolitionist arguments regarding policing and debates about racial profiling.) Stowe’s novel was also banned in Russia by Nicholas I, because in presenting a view that, y’know, all humans might be equal it “undermined religious ideals” of the country.

Tropic Of Cancer by Henry Miller

Forget about Lady Chatterley and her lover: Tropic Of Cancer is the go if you want 20th century smut. Unsurprisingly, it was subject to similar bans and censorship. It even caused the pearl-clutchers of France a bit of bother. They initially allowed its publication because it was written in English and intended only for English-speaking readers… but once word got out about its misogyny, racism, antisemitism, and straight-up eroticism, authorities and conservatives pushed for an outright ban. Meanwhile, around the world, it was banned decisively and immediately. The United States objected to its sexually explicit content and vulgarity up until the 1960s, South Africa until the 1980s. Interested readers, of course, got around these restrictions by smuggling the book, leading to a lot of court cases and criminal trials, which in turn only boosted Miller’s popularity as a purveyor of literary porn. Read my full review of Tropic Of Cancer here.

Nothing But My Body – Tilly Lawless